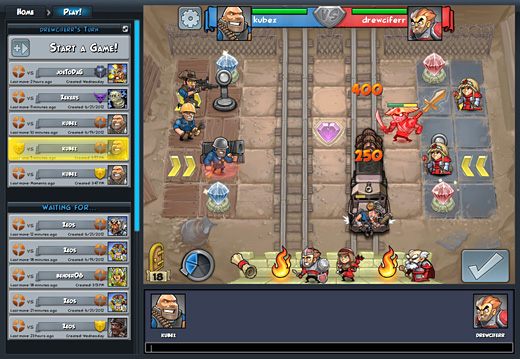 HIGH Taking out an enemy's crystal in a single turn.

LOW Waiting for an opponent to submit their turn.

On the surface, it's an innocuous time sink that began life on smartphones, and was the right kind of addictive. It's perfect for the mobile format, but also contains a surprising amount of strategic depth beneath its cutesy exterior. However, while there's nothing inherently wrong with porting a mobile title to PCs, Robot Entertainment unfortunately haven't done enough to refine the experience for at-home play.

The easiest way to sum up Hero Academy is to describe it as a game of chess where the player performs five moves in a row. In actuality, it has little in common with chess aside from the fact that two players face off on a grid-based board, but just as anyone who's played chess knows it takes a great deal of thought, so does Hero Academy require a certain level of cerebral involvement.

Before a match, players must select between one of five different factions, each with their own unique set of units and items. Only the Council and PC-exclusive Team Fortress 2 factions are available from the start (the others must be purchased to unlock) but I found them to be varied enough that I never felt compelled to try the others.

The single-player challenge mode provides a chance to briefly experience each faction through a series of preset puzzles that require the player to defeat the enemy AI in just one turn. This mode also serves to teach some of the game's strategy before jumping straight into a versus match.

Matches consist of players fighting it out on a randomly-generated five-by-nine grid until all of the opponent's soldiers are defeated, or their crystal is destroyed. Each player has five moves (Action Points) per turn, and since the turn isn't confirmed until it's sent to the opponent, it's possible to experiment in a variety of ways to see what's most effective before committing. 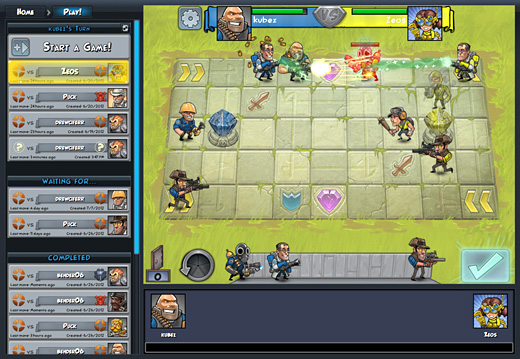 In fact, since the game essentially throws players into the deep end without explaining the capabilities of the various units, I found myself trying and retrying countless methods of attack before settling on moves for my turns. Though the strategic depth is certainly welcome, with no single-player mode to speak of outside of the preset challenges, I had no choice but to work out the best playstyles through countless trial and error against human opponents.

Though there is a point when too many tutorials and excessive handholding can be detrimental to a game, the adverse can also be true, especially for a game like Hero Academy. Each unit has unique abilities, movement ranges, and attack effectiveness (some characters deal more damage against crystals, for example) making it extremely overwhelming to jump into a match with little to no idea what everyone in your faction does, or how they best work together.

"Should I buff up my team and then go in for the kill, or quickly take out my opponent's crystal before they have time to react?" Questions like these plagued me each turn, and I found myself constantly trying one thing and then rethinking my plan of attack and trying another, sometimes going back and forth ten times before finally hitting the button to confirm my choice.

In this way, Hero Academy is a brilliantly thoughtful, versatile game that can be a great joy to play, but it has one glaring flaw—since the Steam version of Hero Academy supports cross-play with the iOS version, that means I was often stuck waiting hours (and even days!) for my opponents to submit their turns.

The game encourages players to have multiple games going at once, probably to alleviate the boredom of having to wait, but when focus and planning the perfect series of moves is everything, it's extremely anticlimactic to be forced to wait so long for your opponent's retaliation. Multiple games may have kept me busy when I was waiting for my opponents to pull out their phones while on the toilet, waiting in line, or whatever it is smartphone users do, but I quickly found that I was no longer invested in the strategy behind the individual matches themselves.

Hero Academy simply wasn't optimized for the platform it was ported to. On smartphones, it excels as a thought-provoking multiplayer game that's leagues beyond the average mindless time-waster, but there simply isn't any reason to have it on the PC unless a player is iOS-less and dying to play with friends. If the developers had added an AI versus mode for players to hone their skills, or even implemented an optional time limit on each move, then I could definitely get behind it. As it stands, Hero Academy remains a great mobile experience that doesn't quite translate to PCs. Rating: 5.0 out of 10.

Parents: This game has not been rated by the ESRB. It contains some cartoon violence, as the various characters attack each other with spells, swords, and guns, among other weapons, but there is no blood. It should be appropriate for all ages.

Deaf & Hard of Hearing: None of the sound in this game is integral to the gameplay, and there is no voiced dialogue. This game should be very accessible for deaf and hard of hearing gamers.