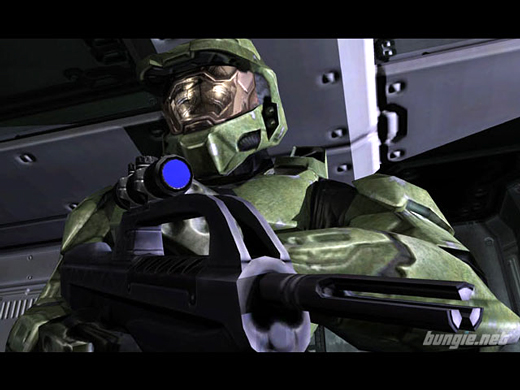 From the rookie sportsman whose real test will be the follow up season where everyone knows his tricks, to the band releasing that difficult second album, much has been written about sequels. Still, it is worth summing up the salient point that there is a balance between developing artistically and not alienating existing fans, and that many sequels live or die around this dichotomy. Halo 2 lets me down as a sequel because it fails to improve upon most of the archaic design features that could be forgiven in the original, and gives Halo fans less of an experience in almost every area. It is a good game compared to the class of 2004, but it is no Halo and should be marked down accordingly.

The story is strikingly worse than the original. In Halo there was the active question of what the strange ring shaped device was, and why it was there, which was explained by the end. Halo 2 should have moved away from this plotline and developed a new story within the universe that had been established. Instead it spends a lot of time explaining the Covenant's methodology and the history of things that took place before episode one. Worse, it ends somewhere in the middle of the second act and confuses its audience with repeated shifts in the player's point of view.

'Buy new improved Halo… Now featuring less Master Chief!' hardly makes great ad copy does it? But that is exactly what Halo 2 does—splits the narrative between the Master Chief, the enigmatic hero of the original, and the Arbiter, a member of the evil Covenant with which Earth is at war. Not only does this leave the player batting for the other side, as it were, it also removes the fun: whilst the Master Chief is still as cool to play as ever, the Arbiter is just plain cold—blooded, that is—some insipid off-shoot of the turtle family plonked into a suit of armour, who is put upon and dominated by others from the start of the story. Just why we should empathise with such a spineless creature is unclear, particularly as he just spends the whole time fighting other Covenant anyway: Covenant who, presumably to help the bemused player, have remembered to change their colours so that they can be easily differentiated from the 'good guys'.

The game is made worse whenfeatures which scream 'I'm a game' are compounded by the sense that there is a lot less freedom than in Halo. Where the original game had levels with various routes around enemy positions that offered the player a choice of how to attack, at times Halo 2 threatens to become an on the rails shooter. There are numerous long corridor sections and most of the surroundings are too obviously linear, with vehicular sand traps in the form of pillars and piles of rubble that the medium should be moving away from.

To be fair, alongside the nineties gameplay features, Halo 2 makes one bold step forward by removing the Master Chief's health bar and thus the need for any health pick-ups (just how did that first aid kit get into the Library?). Credit for that, but sadly this change is less suited to a fast first person shooter than it is in a stealth game like Metal Gear Solid 3. Not having to worry about health in Halo 2 takes away the tension that often occurred in the first game. It means a much more stealth oriented approach must be taken to fighting. The result is that Halo 2's battles are a lot less fun than Halo's, and for a game that basically is all about repeating the same three second battle-high over and over, this is a mistake. If anything, the new features such as health pack removal were probably only inserted to balance out the multiplayer.

Halo 2 might only have been created as a vehicle to sell Xbox Live and to offer the greatest multiplayer experience ever created. It may well even have succeeded. But this in no way excuses the single player component in which the gameplay changes don't really work and the stunted story and set-pieces are underwhelming. If Bungie really wanted to fix things they should have addressed some of the (minor) problems with Halo. Instead they have introduced a whole raft of new ones. To such an extent that to me, this doesn't feel like Halo anymore; it has only a passing resemblance to the wonderful game that had me gripped and took me on an emotional rollercoaster back when the Xbox first came out. This game could and should have been so much better. Still, I'm sure the queues for the next instalment will have in no way diminished because of this weakness, if for nothing else other than the thirst for story resolution. Just don't get me started on the rules for trilogies. Rating: 7.0 out of 10.