No Love on This Battlefield 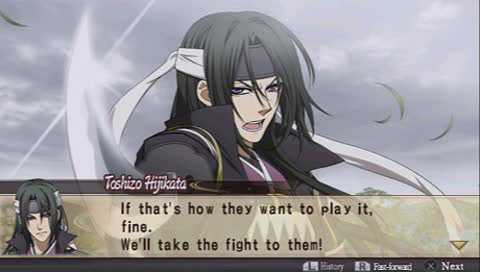 WTF The best thing I can say about the game is that it has nice character designs.

Aksys Games, we need to have a heart-to-heart.

After years of western publishers ignoring the realm of otome games, you bravely took up the call to localize one of the biggest otome franchises in North America.

That game, Hakuoki: Demon of the Fleeting Blossom, was well-received by both female fans of the romance visual novel subgenre, as well as a broader audience that appreciated its snappy text, supernatural themes and historical Japanese events. 2012 was a great year to be a otome game fan in the West, and I, along with many others, eagerly awaited your next announcement.

Then, you blew it.

While I can't profess to understand the inner workings of game localization, I can say with full confidence that bringing over the Hakuoki action spinoff Hakuoki: Warriors of the Shinsengumi

was a huge mistake. What fans are left with is a disappointing game that reads as a poor attempt at cashing in on an emerging franchise.

Ultimately, Warriors of the Shinsengumi's biggest flaw is that it fails to capture the elements that made Demon of the Fleeting Blossom engaging, while neglecting to add solid action to redeem its other shortcomings.

As an otome game (a visual novel with a romantic bent aimed primarily at women) Fleeting Blossom featured a deeply-engaging story, gorgeous illustrated artwork, and the ability to strike up a hot Showa-period romance with a number of eligible bachelors. Instead of a true sequel, Warriors of the Shinsengumi acts as a spinoff that allows players to fight through iconic battles as the men players tried to woo in the original.

Those looking for storytelling on par with Demon of the Fleeting Blossom will be sorely disappointed, as the missions in Warriors of the Shinsengumi are held together by the barest of narrative threads, relayed by uninteresting dialogue sequences that are made all the more offensive by the game's lackluster art. From mission to mission, I barely knew what I was doing or why I was doing it. 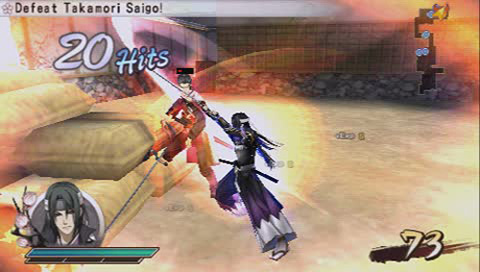 Since Warriors of the Shinsengumi takes the series's focus away from narrative, it's up to the Dynasty Warriors-inspired gameplay to drive the experience forward.

For anyone who's played any of the Dynasty Warriors games or their countless spinoffs, gameplay will be very familiar: the player is required to cut down hordes of enemies in an attempt to get to certain locations highlighted on the mini-map, defeat a specific enemy, and proceed to the next area. The bulk of Warriors of the Shinsengumi consists of this rinse-and-repeat formula, and there's little effort made to keep things interesting from mission to mission.

Moves are executed with two attack buttons that can be chained to create various combos, but the majority of play is so easy—even on the hardest difficulty—that it takes little finesse to bring down the insipid AI enemies. For the majority of playtime, I was able to run past AI grunts and beeline straight to the bosses with barely a dent in my HP. Combine this with characters who say the same three lines over and over in battle, and you have the recipe for the most mind-numbingly repetitive gameplay in recent memory… and this is coming from a major Samurai Warriors fan.

The game does include a number of customization options, including the ability to craft items and unlock costumes, but there's never any need to use any of it during a story run. In fact, both story modes are over so quickly that players will barely get the chance to see half the items available to craft. It's a shame the devs chose to dumb down the difficulty in what I can only assume was an attempt to make the game accessible to visual novel fans who would probably not come to a game in this series prepared for a combat-oriented experience.

Warriors of the Shinsengumi is near impossible to recommend to even the most hardcore of Hakuoki fans, but I'd be lying if I didn't admit that I was excited by playing as my favorite Hakuoki boys in flattering new costumes while hearing their sultry voice actors recite new lines, and I was pleasantly surprised to learn that the game included a screenshot feature. However, it's faint praise when new character designs and voicework are the best I can cite.

In the end, I'm faced with a moral dilemma: is it better to localize a bad game than to have no game at all?

While I'd normally be inclined to say the former, I can't help but wish Aksys spent their time and money on a title that would better serve both their current and potential audience. While their decision to bring over Sweet Fuse: At Your Side and Hakuoki: Memories of the Shinsengumi reassures fans that the company still believes otome games are viable in the west, Hakuoki: Warriors of the Shinsengumi

remains an unfortunate choice that falls short of satisfying both Hakuoki fans and action game fans alike. Rating: 3.0 out of 10.

Disclosures: This game was obtained via download from the publisher and reviewed on the PS Vita. Approximately four hours of play were devoted to the single-player mode, and story modes for two characters were completed. There are no multiplayer modes.

Parents: According to the ESRB, this game contains blood, strong language, violence. While there is not any excessive gore, the game does live up to its ESRB rating. There is occasional blood splatters and swearing, but nothing that would offend anyone who watches PG-13 movies on a regular basis.

Deaf & Hard of Hearing: All of the dialogue in the game is in Japanese and subtitled. There are no instances where the game relies on audio cues to alert the player.