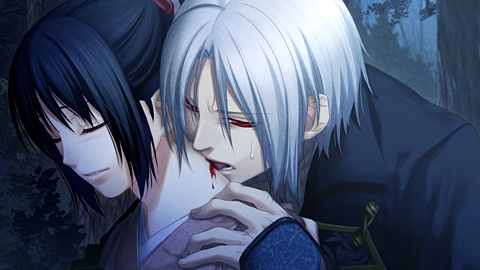 HIGH Gorgeous illustrations and plenty of heartthrobs for all persuasions.

LOW A little lacking in the romance department for an otome game.

WTF Since when did Hijikata of the Shinsengumi swear like a sailor?

Sitting down to write this review, I found myself more torn over Hakuoki: Demon of the Fleeting Blossom

than I have been for previous games. Fundamentally, I am the target audience—Hakuoki is both a visual novel (for fans of text-heavy games) and an otome title (targeted specifically at a female audience) so by golly, this is made for me! That said, while Hakuoki is a superb visual novel and sports a compelling story, it falls short of being a great otome game—there just isn't enough romance.

For those unfamiliar with the terms, Japanese visual novels are essentially books with anime-style visuals and voice acting. Otome games are titles aimed specifically at a female audience. Both genres have seen little success outside of their native country, and it's been "universally accepted" that western audiences don't have the patience or interest level to read wordy titles where play comes from selecting choices that dictate how the story plays out. With virtually no history of otome games or visual novels in the west, Aksys took a ballsy gamble by releasing Hakuoki, the first major otome game ever localized in English for the PSP.

Hakuoki is not a traditional otome game in that it relies heavily on a historically inspired plot. When Chizuru, the protagonist, travels to Kyoto disguised as a man in search of her missing father, she unwittingly stumbles into three members of the Shinsengumi. For gamers not up on their Japanese history, the Shinsengumi is a famous group of masterless samurai who banded together to protect the fleeting shreds of traditional samurai honor in the rapidly-changing political and cultural climate following Japan's first contact with the west in 1853.

Between the heated battles, political intrigue, and twinge of supernatural horrors that occur in the story, I was left wondering when on earth Chizuru would have the time to romance anyone, let alone members of the Shinsengumi themselves. Luckily for her, the Shinsengumi appear to know her father and agree to let her stay at their headquarters while she continues in her search. Of course, this being a game that is ultimately centered on the premise that Chizuru will end up with one of five members of the Shinsengumi (or the secret character revealed later in the game), all of the choices I made along the way were done with consideration to which character I most wanted to see her romantically involved with.

As a visual novel, Hakuoki comes complete with all the usual bells and whistles and offers a number of helpful features that make reading through the endless text and replaying certain segments a breeze. A handy quicksave function also allows one to save before any major decision—I often used this to try one path out, and if I didn't get the result I wanted, I could instantly go back and pick differently. This ability to skip back and forth means that it's almost impossible to mess things up, and though there are ways to get game overs, I actually didn't get any until I purposefully made unwise decisions just to see what would happen. 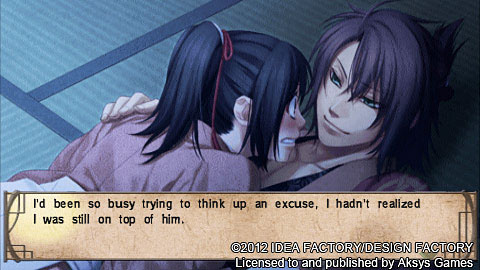 An encyclopedia is also available via the in-game menu, which was perfect for when I started feeling overwhelmed by all the various characters and terms over the course of the story. Other nice additions include the ability to zoom through already-read text at the click of a button, and a command that takes away the text window at any point in the game so the gorgeous visuals can be appreciated at their full glory.

In a game like this, writing and, by extension, the localization, is an extremely important factor. Aksys is known for their slightly more modern and topical localizations, and Hakuoki is no exception. As someone who understands Japanese to the point of being able to listen to the Japanese voiceovers and know what's going on, the game has clearly chosen to let the characters speak in more modern, colloquial speech instead of being historically accurate. However, the colorful profanity used by one of the characters feels too out of place for the setting, even when considering the harsh language of the original Japanese. As a whole, Aksys has done an excellent job making the story easy to read and exciting textually, but I did find myself wishing they had not been so liberal at times.

Though the story is well written and immersive enough to keep most audiences with some level of interest in anime and Japanese history intrigued, the romance aspect is by far the meat and potatoes of an otome game. Hakuoki provides women with an experience that caters to the female gaze, something that's far too uncommon in video games these days.

With a satisfying range of handsome, fully voiced hunks to choose from and two separate endings available for each, there are plenty of sultry men to be romancing in the violent streets of Kyoto. Unfortunately, the first four chapters of the game only serve to set up the plot and offer only minor deviations depending on individual choice, meaning the bulk of the game feels like it's not spent romancing, but simply taking in the story as a whole.

Depending on which character players have the highest romance rating with at the end of chapter 4, there will be three or more character-specific chapters centered on developing Chizuru's relationship with her chosen prospect. That may be the game's intention, but as a female playing this game from the perspective of someone more interested in the romance than anything else, I couldn't help but feel Hakuoki fell a bit short. Some characters are more developed than others, but all of them felt as though interactions with them came only in service to the story as a whole. In the end, although there were a number of endearing scenes, the segments with actual romance (including the endings!) were superficial and abrupt when compared with the rest of the game.

Hakuoki: Demon of the Fleeting Blossom

was a visual feast and a joy to play as someone who's been waiting years for titles like this to come out in English. It's just a shame that it tries too hard to strike a middle ground between story and romance. Although I feel Hakuoki sells itself short in doing so, otome fans finally have a title they can play and understand. Open-minded gamers who don't mind a little romance thrown into their story will probably enjoy this title too. I sincerely hope that if another publisher ever decides to localize an otome game, they don't shy away from the main selling point: the romance. Rating: 7.0 out of 10.

Disclosures: This game was obtained via publisher and reviewed on the PSP. Approximately 8 hours of play were devoted to the single-player mode, and two of the character's stories were completed. There are no multiplayer modes.

Parents: According to the ESRB, this game contains blood, sexual themes, strong language, and violence. All graphic material is depicted in still images, and violence is generally represented by an image of a character with their sword drawn. There are some blood spatters and numerous swear words. I would not recommend this game for young children.

Deaf & Hard of Hearing: Game is 100% text-based, meaning all actions and dialogue are written out for you. Any sounds that are not represented by text (such as noises associated with sword fighting) will have accompanying images depicting the event, so deaf and hard of hearing gamers will be able to fully enjoy this game.

I think we have an unique perspective, as players who can understand both the English and Japanese. Though I did not play the original in Japanese, I too understood the Japanese dialogue, and noticed a number of instances where the translation seemed pretty liberal. But as I was not particularly invested in the original Japanese version the changes didn’t bother me any more than the few points I mentioned in my review. The editor of the game and I were chatting on Twitter, and he was lamenting that it’s tough when localizing a game, particularly a popular one, because there… Read more »

Well, I have to disagree a little – though I don’t like some of the decisions made in the localization, I do appreciate and respect translators and editors that enhance the text and make it something that is both readable and enjoyable to an English-speaking audience.

I actually really appreciated the fact that they made Chizuru more of an active protagonist rather than the passive doormats many otome game protagonists are. How did you find that aspect of it?

There are different levels of romance factors involved in otome games so it wasn’t a big problem for me. I incidentally enjoyed the story heavy game which was (as you said) a little different from regular otome games. However, as someone who understands about 85% or so of the spoken Japanese (and played a portion of the game in Japanese) I was definitely less than happy with the translations. It wasn’t only Hijikata but the whole story that warped. As much as I understand the need to try to make it sound “natural”, there were many places I would’ve translated… Read more »

He swears like a sailor because the guy that was responsible for him thought that translating him like that was better than doing an actual translation. He basically changed the character to suit what he though the character should be.

This is why I hate translators that like to put their “spin” on a character.