Your Myths! I Must Have Them All! No Symbolism There. 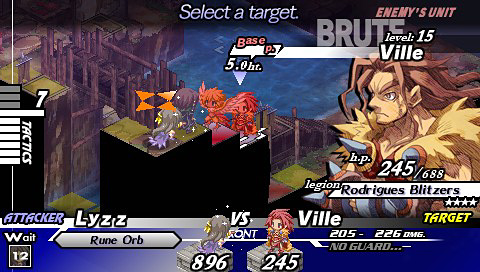 LOW I have to break open chests over multiple actions? With a rogue in the party?

WTF That's what you call a tutorial?

is the story of an oppressed rebel group striking back at the empire that rules over it. The drama is certainly compelling enough, as we like to imagine an underdog winning rights and respect. The protagonist is destined to lead his people out of obscurity, and to fight for a place of justice and honor. On the other hand, it's a game with stark moral decisions and consequences. The plot trappings are somewhat so-so in that the twists, turns, and political machinations are not wholly surprising, nor particularly engaging.

…This is a strategy role-playing game (SRPG), however, which means the gameplay is largely divorced from the plot in tactical skirmishes in between visual novel-esque portions.

The titular Gungnir is a weapon that makes its way into the game after a sequence where I had to purposefully lose a battle. The odds were stacked against me in such a manner so that even though I was starting the game and barely had a grasp on its battle queue, I knew what would transpire. Soon after, the "spear of destiny" came down and the moral questioning of whether it is right to use demonic forces to save my rebel group from the oppressive empire was raised, though its exploration seemed far too stark in its terms, presenting a binary decision system with little nuance.

This is in direct opposition to some of the set pieces, which do show a fair amount of imagination in how they can be used tactically. From bridges that offer choke points to assaulting a castle, there's enough variety that I was constantly taking up new strategies. Decisions on whom to bring are also left fairly open, including a choice of characters pivotal to the plot as the leader for a particular battle. Unfortunately, these leaders have a strong effect on gameplay, and there was some confusion in exactly how this system worked.

Rather than proffer a tutorial that highlights the mechanics directly, Sting's method of throwing up lots of information in text boxes with accompanying pictures makes its way to the fore. It is a method that theoretically works, as this is not an action-oriented game that requires instant reflexes, but is still tedious in that it required me to reference these tutorial bits a few times after I'd read them, just to make sure I understood everything correctly. 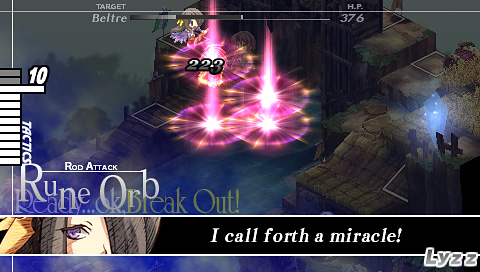 Basically, in the battle queue, enemies are listed in which order they will be performing their action, and how far away they are (in terms of time units) from acting. The player is on a different schedule, however. The player's units are not on a linear track of when they act: the player has a turn, and then chooses which unit to use. Each unit can act, and then has a cooldown period. They can still act during this cooldown, but suffer permanent health damage if they do so.

It is a system seemingly designed to make the player feel more in charge of the events surrounding them. The enemy does not have this same ability, so there is always a degree of predictability in their behavior and patterns, while the choices were quite often open for what I could do with my units. The downside is that I would often forget about one of my units, who would then gain little from the battle, since the traditional method of gaining experience by actually performing actions is used.

Progression (in general) is fairly simple in that attacking gives XP, which gains levels, which gives more health and carrying capacity so players can use heavier, or more, equipment. However, which attacks and powers are available is reliant on the equipment being used, which has its own levels. Using a weapon (or tome or staff, in terms of spells) means further skills will be unlocked for use. A separate tactics meter also levels up, which I never fully understood.

As one might guess, there is a lot to the game, but the UI is utterly baffling in this regard. There are so many different fonts, numbers, and abbreviations happening everywhere that it can be a bit much to follow. Paired with the tutorial system, it meant that I mostly muddled through the first five hours or so, hoping I understood some new facet with each battle. That isn't horribly far into the game, but it felt like a process just to get to that point. I haven't even listed all the systems and bits and bobs the game has, largely because there is that much information to process—moreover, some systems, such as summoning through the spear Gungnir, were so useless and cryptic to me that I never used them.

In the end, it feels like Gungnir pushed forth a bunch of options, but instead of making them options, created a rather obtuse tangle of rules, mechanics, and menus that did not in any way attempt to guide me into the experience at a steady rate. Once the system is understood, there's quite a bit of fun to be had being a strategic overlord commanding a battlefield. That said, there is very little motivation to do such, as the story didn't carry enough tension to keep my interest, and the characters felt bland enough that I had no particular investment in them outside of their combat roles.

For someone like me who is a fan of the SRPG genre, I was fine with pushing myself to that point, but I would not recommend Gungnir

Disclosures: This game was obtained via the publisher and reviewed on the PSP. Approximately 21 hours of play were devoted to the single-player mode, and the game was not completed.  There are no multiplayer modes.

Parents: According to the ESRB, this game contains alcohol references, fantasy violence, mild blood, mild language, mild suggestive themes. There are a number of references to alcohol, and a prison scene that implies rape of a female prisoner (which moves this beyond just mild for me, but I am not the ESRB), though the violence is fairly cartoonish. Themes of executing people are presented, however, which is not easily moved beyond with just cartoonish violence.

Deaf & Hard of Hearing: Sound is not required to play this game at all. As it is a turn-based game, audio cues play little part in the actual action of the game.