Unicorns, Specters and Dragons, Oh My! 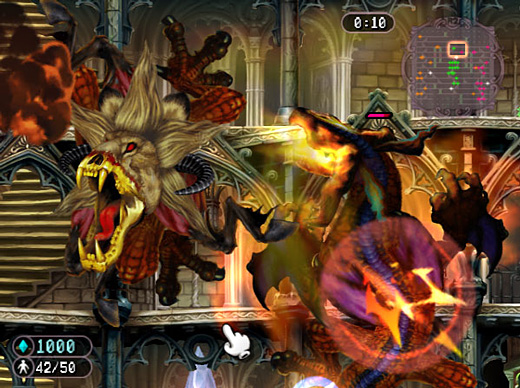 HIGH Completely overrunning the enemy with an army made up entirely of chimera and dragons.

LOW Dedicating 30 minutes to a stage, only to die and have to start all over from the beginning… AGAIN.

With the recent implementation of a new PlayStation 2 classics line on the PSN, it's now easier than ever to pick up titles that may have been missed from that era. GrimGrimoire

is one such game for me. Developed by Vanillaware, makers of the PS2 cult hit Odin Sphere, GrimGrimoire features luscious character and background art combined with tactical gameplay. Unfortunately, timing its release at the end of the PS2's life meant that it was doomed to be an enthusiasts'-only title from the start.

On the surface, GrimGrimoire's story is like one you might have heard before. Teenager Lillet Blan attends prestigious magic school? Ever since Harry Potter, the magical academy premise has suffered from almost immediate redundancy, but in this case the similarities end there. After a mere five days, Lillet awakens to find everyone dead except her. Before she meets a similar fate, a mysterious power propels her back in time to the day she first arrived. Now Lillet is forced to relive those five days over and over again until she can solve the mystery surrounding the horrible tragedy.

Time loops are nothing new, just as witches and magic academies are commonplace in our media today, but Vanillaware's signature flair makes the premise seem fresh. The major characters are all named after various alcoholic drinks, oddly enough, and over the course of Lillet's journey we're introduced to the eclectic cast of professors at Silver Star Tower including an alchemist who's been transformed into a lion, the necromancer who is hopelessly in love with him, and an enigmatic devil who teaches sorcery. My favorite character was hands-down the devil Advocat, who oozes charm and has a witty retort to everything, including his allegiance, which is a constant question mark.

Story sequences are interspersed between levels by way of large animated character portraits on static backgrounds, accompanied by full voiceovers. As with most NIS America localizations, the original Japanese as well as the English dub are available to select. The English voice actors were decent, but as a fan of hearing media in its original language, I found myself quickly switching back to the original Japanese. 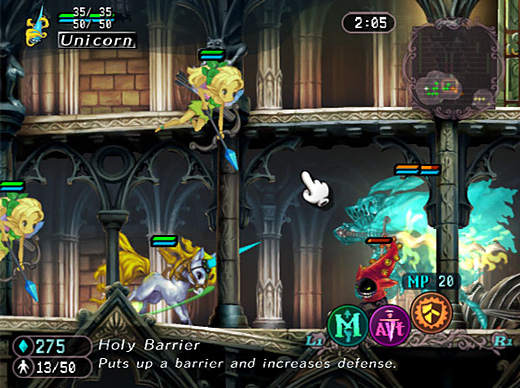 Though the cut-scenes don't offer the same theatricality that we've come to expect from games in recent years, I personally found the storybook style, which is reminiscent of visual novels, much more appealing than the majority of game narration these days due to its unique style and high-quality illustrations. The gently moving backgrounds and character illustrations exhibit a breathtaking level of detail that can be appreciated by both fans of Vanillaware and newcomers to their work.

Vanillaware set the narrative bar high with an epic story and intriguing characters with their previous works, and unfortunately GrimGrimoire seems to have suffered because of it. The story should only take an average player a little over 15 hours to complete, and though the characters are charming and the story has a few small twists, it ultimately cannot compare to the grandeur of other notable Japanese role-playing games (JRPGs). This does not mean that GrimGrimoire isn't charming in its own right, but for those looking for an epic fantasy brimming with edge-of-your-seat intrigue will not find it here.

The true meat of GrimGrimoire, however, lies in the gameplay. The title of the game takes its name from the Grimoires, or magical books, which are used to summon all manner of creatures, from sinister demons to friendly elves. Contrary to traditional real-time strategy (RTS) fare, GrimGrimoire battles are played in vertical maps depicting the halls of the school's tower.

Opening up a Grimoire allows players to summon runes, which in turn can be used to summon helpers, attack units, and towers. Leveling up runes as you create them also gives a variety of bonuses, such as increased HP or new abilities for your units. Since the player begins each stage with few to no runes or units (depending on the particular level) and all summoned allies start at level 1, each stage is essentially begun as a clean slate. With no grinding or equipping beforehand, it's up to the player to carefully plan for the upcoming battle before they're swarmed by the enemy… At least in the beginning, anyway.

The four magics in GrimGrimoire have a circular relationship, meaning each has a strength and weakness, but overpowered dragons and chimera mean that later in the game, a win is pretty much guaranteed if you're able to spam dragon summons over and over. Though the game gives you an arbitrary max familiar cap for each level in an attempt to deter players from doing this, it was more than a little disappointing to find that little strategy is needed for the later levels when simply summoning the strongest familiar, regardless of its magic type, works so well.

As someone who plays a lot of RPGs but has only dabbled in the tactical subgenre, GrimGrimoire

was a breath of fresh air. The straightforward nature of play has whet my appetite for more, and the fairy tale charm present in every aspect were just the thing for a player like me who's tiring of RPGs with flashy graphics and "epic" stories that still lack punch. Rating: 7.0 out of 10.

Disclosures: This game was obtained via download code from publisher and reviewed on the PS3. Approximately 17 hours of play were devoted to the single-player mode, and the game story mode was completed. There are no multiplayer modes.

Parents: According to the ESRB, this game contains fantasy violence, mild language, mild suggestive themes. Though your summoned creatures fight for you, there is no overt bloody violence. The ghost, demon, and chimera designs would probably scare young children, but then again the game's systems are probably too complicated for children who might be scared by them. There is some sexuality present, though it is generally implied through the dialogue.

Deaf & Hard of Hearing Gamers: All dialogue is subtitled, and any contextual sounds made during battle such as the chime that rings when new units have finished summoning are accompanied by visual cues on screen. Deaf and hard of hearing gamers should have no trouble enjoying this title.

You know, I didn’t have any problem navigating the cursor! There were a number of quick select functions set to the d-pad that allowed for quick and easy selection of different units and groups. It did get a bit eye-straining to drag the cursor around the map after a while, though (cursor is controlled with the left analog stick). All the action pauses when you go into the select mode, so you don’t have to worry about messing up and not being able to select things fast enough.

The little cartoon hand on the screenshot has me a little concerned though. Are you actually navigating a cursor across the screen with a controller? That doesn’t exactly sound player friendly to console gamers :S .