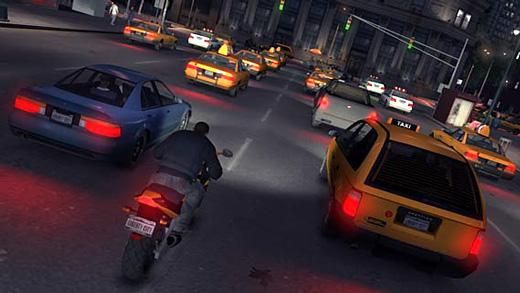 I was never a huge fan of the Grand Theft Auto series. The only one I sort of enjoyed being San Andreas, and I had mixed feeling about that one. However, due to an overwhelming critical response, and the return of the annual spring-summer gaming drought, I decided to give Grand Theft Auto IV (GTA4) a chance. After finally completing it, my feelings toward GTA4 are a mixed bag.

First off, the atmosphere was astonishing. I was amazed by all the little things Rockstar did to bring their created world to life. Things like actually having shows to watch on TV instead of just a picture and sound; being able to choose from a plethora of different radio stations while driving, each with their own variety of music and talk shows; and the way everyone pulls over and moves out of the way when I am driving a police car with the siren on. Rockstar also provided many options in places to go; such as playing pool, throwing darts, and even comedy clubs featuring real life comedians. The player may even date and hang out with friends. In fact, doing so is significant to the gameplay, since friends will offer special services when they like you enough. All these elements combined made me feel as though I was actually living the life of the main character, which is rare for the action adventure genre.

Unfortunately, this is where my compliments end. Everything else about the game became flat and annoying by the time I reached one-fourth completion. Take the story for instance. It started out well enough; with main character Niko Bellic stepping off a boat from Russia and entering Liberty City, where he wanted to live the "American Dream" with his cousin Roman. Well not only did Niko quickly discover that his cousin was not living the dream life, but that he was in debt to the wrong kind of people as well. Follow that up with about ten hours of Sopranos style mob drama, and some dialog about trying to escape the past, and you have the first part of GTA4's story in a nutshell. Unfortunately, everything went to hell when the game hit the quarter mark. At that point the story, once focused and well written, dissolved into an unfocused collection of subplots. The game did try to continue the same storyline, but those plot points were often more than four hours apart from one another.

Filling the gaps were many mission strands in which people hired Niko to be their personal hit man and watch over drug deals. While I did like the stories and characters associated with these missions, they had almost nothing to do with the original plot line and the game did a poor job in tying the different strands together; resulting in them feeling more like mandatory side quests and not part of a cohesive story. Furthermore, the only motivation Niko seemed to have for taking these jobs was needing money, but the game never said why he needed it. He was not trying to earn start-up money for a business, attempting to build a drug empire, or anything. There was not even a single bill that needed paying. Because of this, I never felt like I was achieving anything. I was just plugging away with no goals, only doing things because the game asked me to.

Not helping matters much, the controls could have used some serious tweaking. You would think that a game with "auto" in the name would have decent driving controls, but apparently Rockstar's focus was elsewhere. It seemed like every vehicle Niko tried to operate was without power steering as simply making a turn without hitting something was near impossible—without almost completely stopping the vehicle, that is. Besides that, the vehicle would start sliding and skid off the road any time I applied the brakes; not all the time, but about 40 percent of it. Considering that one of the main gameplay elements of the Grand Theft Auto series is police chases, buggy driving controls are just unacceptable (don't even get me started on the check points).

Even so, I cannot shake the feeling that Grand Theft Auto IV should have been great. The atmosphere of Liberty City is something that Rockstar North should be praised for, and I really liked where the beginning of the story was headed. It is just too bad that the buggy controls and the story's lack of focus kept the game from reaching its full potential. Rating: 6.0 out of 10.

Disclosures: This game was obtained via retail and reviewed on the PS3. Approximately 40 hours of play was devoted to single-player modes (completed 1 time) and 3 hours of play in multiplayer modes.

GTA IV is gamerankings.com s 4th highest rated game of all time. It was universally acclaimed by respectful publishers across the board upon release. The main area in which the journalists heralded was the ground breakingly immersive city. It was genuinely next-gen and If you track back and look at the reviews upon release you will find references to this all over place. The art direction and tone was absorbing. This is the first GTA IV that has a sense of maturity. It lost the silliness at the core of previous GTA games and provided a main character and city… Read more »

I agree almost in everything in this review. When GTA3 come out it was completely fantastic although it’s many flaws. Vice City improved even more and San Adreas was the peek. GTA4, of course has great graphics and some things fantastic (as you mentioned the friendship relations and the distractions – pubs, minigames and shows) but the story is off. I agree it has a good start and objective, but all the turns, twists and side missions seems somehow disconnected. Although I’m PC player I also disliked the driving in GTA4 mainly because of the camera when you turn or… Read more »

IMHO, GTA IV was an incredible experience in terms of environment and playability. It was one of the few games to possess a world that actually felt alive. The graphics in this game, particularly when it was released, were spellbinding. Seriously, this game (arguably) had some of the best rag-doll physics I’d ever seen at the time. I’m not sure entirely clear on what your issue with driving was, since it’s pretty straight-forward. If you drive like a deranged maniac, of course you’re going to hit something. Wouldn’t you expect the same in real life? If you’re still hitting things… Read more »

While I’m with you on lots of the points you raise, I respectfully disagree with you overall opinions about the story and the controls. First and most important things first: the story and characters. Admittedly, if you play GTAIV the way I feel it’s meant to be played (i.e. doing main errands but also side quests, befriending characters, just roaming around raising havoc) the story arc can feel “a little” disjointed. I myself played it in little story chunks (say, three or four missions in a row) and then spent some other time just toying around; so, coming back to… Read more »

Yes- not one reasonable turn radius for any vehicle in the entire game… and that includes Nico himself. He has to run in a 10 foot circle to turn around.