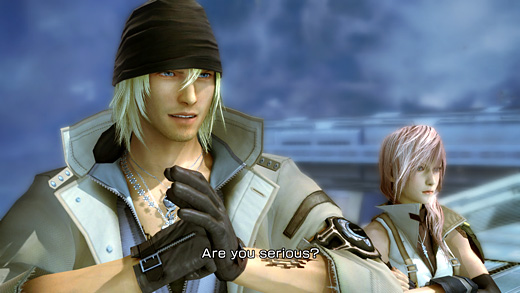 HIGH Finally getting my hands on a new Final Fantasy.

LOW Realizing that the game I was playing only looked like Final Fantasy.

WTF Who ever green-lighted Vanelle's voice acting should retire.

, I think it's safe to say that we have two differing opinions about the game. I say this with the utmost respect and in no way am I trying to discredit his review. On the contrary, I agree with a lot of the points he made.

Like Trent, I too feel that the battle system is the best in the series, and I am also in agreement with the linear, more streamlined, approach. However, here is how our opinions differ: while Trent views Final Fantasy XIII as a step in the right direction for the genre, I see it as the slaughtering of a great franchise.

Final Fantasy has been my favorite game series for a long time. Serving as gamer comfort food, these titles have always been my go-to games for memorable stories and characters, masterfully composed soundtracks, and fully-realized worlds I could be sucked into.

Final Fantasy XIII offers none of this.

The heartfelt melodies that inspired many fan made music videos on YouTube? Gone, and replaced by songs that add little meaning to the situation in which they are used. Fully realized worlds that are easy to be sucked into? Nope. For the most part, Final Fantasy XIII is completely devoid of atmosphere. My party's surroundings was mostly static with little-to-no ambiance, and usually consisted of corridors and narrow pathways. It was not until I reached the 30 hour mark that I came upon a place that was open and teeming with wildlife, but even that proved to be little more than a giant field; then it was back to the tunnels and corridors.

Then there's the story— the part I was the most disappointed with. 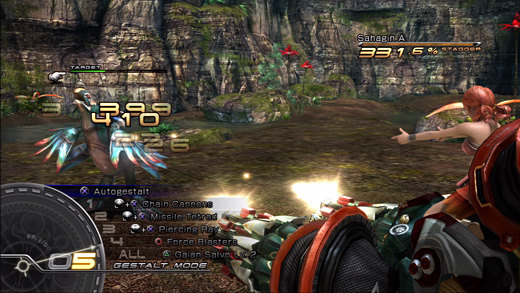 It's not that I didn't understand it (I was fully aware of what was going on thanks to the in-game encyclopedia) it's that I did not care. I wanted to care—hell, I tried my damnedest to care, but it was as if the game was trying to keep me from caring.

Unlike previous Final Fantasy games, I was unable to attach myself to any of the characters emotionally. I contribute this mostly to the fact that the game splits the party up early on, and then bounces the player from group to group every few hours. Any time I was even remotely close to connecting with a character, the game would pull me away. What bit of time I did have with a group was usually filled with overly melodramatic dialog and shallow one-dimensional character personalities. The only character I found the least bit interesting was a man named Sazh, who was fighting to save his son. Unfortunately, like I said earlier, every time I would start to connect, the game pulled me away.

Now, I'm a gamer that places emphasis on atmosphere and story, especially in role-playing games, but a player who does not may be able to overlook these things. However, I don't see them being able to get over the tediousness of the gameplay.

In the introduction of this review, I stated that I liked the idea of a more streamlined approach to the gameplay for the same reasons that Trent did. I stand by that statement. However, if a game is linear, then it needs variety, and this is something that Final Fantasy XIII is severely lacking. Most of my time with the game can be summed up as such: two to three hours of killing random enemies, random boss fight, cut-scene, then repeat. Once I reached the "open" part of the game, there were sidequests that consisted of nothing more than hunt down a specific enemy and killing it. It felt like I was playing a severely dumbed-down version of Demon's Souls with a Final Fantasy covering.

Now, I need to mention that I did not complete the game. I put a little over 40 hours into it before finally reaching the point where I lost all willingness to continue. As a gamer, I found Final Fantasy XIII to be below average, dull, and unable to offer anything to players not already a fan of the franchise. As a die-hard Final Fantasy fan, I am enraged after witnessing something I love so much being gutted before my eyes. If Trent is right, and this becomes the new style for Japanese role-playing games, then I do not want any part of it. Rating: 3.0 out of 10.

Disclosures: This game was obtained via retail store and reviewed on the PS3. Approximately 40 hours of play was devoted to single-player modes (completed 0 times) and there are no multiplayer modes.

By far I have spent nearly 20 hours and i think it is the worst final fantasy id ever played. All the time is the same: a corridor yo have to walk through and fight with the enemgys you find in there. Quite boring in comparison with the others FF. Despite all, I am determined to finish it.

My last hope of reviving my interest in the final fantasy franchise really came to a crashing halt with this one. I’ve read a few comments and reviews and (mutually agreeing that XIII was a let down) was impressed at how people were able to clock in over 20 hours worth of gameplay. I couldn’t get past the 15 hour mark because i just couldn’t tolerate all that terrible dialogue; Falce, pulse etc, it almost felt like every second word was one of those terms. Also, Vanille’s voice was excruciating as well, it was as if she couldn’t decide on… Read more »

I basically had the same experience: I plough through 27 hours in the hope of reaching a point where I would start to enjoy the game but it never came. The whole design philosophy for FXIII seems completely bizarre: streamline the elemental attacks but replace it with something essentially the same. A poorly told story and irritating characters don’t exactly help either. Great article.

I agree with quite a lot of what you said. I’ve never been a huge Final Fantasy fan myself – 8 and 10 were the only games in the series I really enjoyed, and that’s definitely not a common viewpoint – but XIII really did its absolute best to turn me off it. A story comprised of psychobabble and the words ‘L’cie’, ‘Pulse’, ‘Focus’, ‘Leflubble’ and ‘bltrrrfgh’ (for the toddlers out there) really tested my patience with the game. It’s bad, bad times when you spend dozens of hours with a game and neither know nor care about what’s going… Read more »