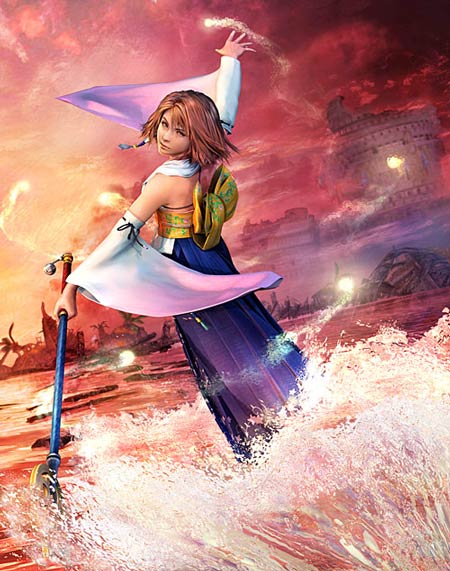 My experience with Final Fantasy X (FFX) has been a long and baffling one. Here is a game that tells an undeniably wonderful story, features a battle system that is fun and intelligent, and that manages to suck you in and involve you in a way that only the best games can. And yet, at the end of the day, I must say, I was disappointed. Frustrating design decisions and rubbish side quests leave FFX seeming like a rough, dented gem and a game that, while great, never quite delivers on the perfection it promises.

I’ve only played one other Final Fantasy, that being FFVI, and from what I can tell, the franchise didn’t change very much in the nine years between the two releases. A mysterious and magical female character, a gang of unlikely heroes teaming up to beat evil, swathes of random battles to tick you off time and time again… been there, done that! However, whilst the core concepts remain for FFX, it seems that for this installment the actual RPG gameplay has taken a major backseat to the narrative, the latter standing as the biggest and best aspect of the game’s makeup.

So, why don’t we chat about that first? The plotline focuses on a blond teenager by the name of Tidus, who finds himself inexplicably transported to the mysterious fantasy world of Spira, with no clue of how he arrived or what to do next. Slowly, Tidus makes his acquaintance with those who will soon become the members of his party: Yuna, a summoner on a quest to rid Spira of a destructive monster, Wakka, Yuna’s bodyguard and all around nice guy, Lulu, a dismissive black mage, and other equally endearing characters. Tidus sets out with this ragtag group of pilgrims, pledging to serve and protect Yuna on her quest, whilst trying to solve the mystery of his arrival in Spira and find a way back home in the meantime.

OK, so it might sound like typical fantasy wankery when written in a game review, but the fact of the matter is that this tale is one you absolutely need to experience. Compelling, emotional and well-paced (well, until a certain point), featuring a cast of characters that manage to rise above being meagre avatars and become real friends, it’s clear that substantial time and effort have gone into the narrative’s creation and execution. There are a variety of little storytelling tricks used to pull the player in, such as voiceovers, flashbacks and flashforwards, and though these would seem quite jarring and amateurish in a film (a flashback is always accompanied by a fade to white and a ‘woosh’ sound, for example), in  FFX, these techniques come across as genuine attempts to inject some subtlety and expositional panache into a medium which rarely experiments with either. 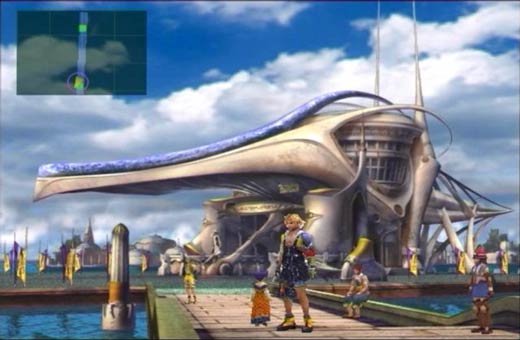 That said, the story possesses a few expositional hiccups, some minor, some major. Occasionally characters react strangely to situations, speaking dialogue that doesn't really work in conjunction with the current event, or responding to a situation in a totally unbelievable manner. Darn Japanese translation, eh? Also, there are a few intriguing questions raised that are never satisfactorily answered. The game also chooses to throw a whole new villain and a significant character development into the mix right before the end, with no build up and woefully inadequate explanations. Perhaps the nerds on gamefaqs.com/ffx were able to piece together enough of the sporadic explanatory dialogue to figure out what the hell was going on, but for me, these developments didn’t make a wink of sense come the ending. Such niggles do sour the experience a teensy bit, but nevertheless the story remains the game’s shining beacon, and is something that I don’t think I’ll be forgetting any time soon.

Being an RPG, the crux of  FFX’s gameplay comes from smacking down baddies in self-contained battle screens, all to a repetitious battle theme. Are the battles any fun this time around? Yes. Very. Squaresoft, probably taking dares from other drunken Japanese businessmen at the time, decided to implement a turn-based battle system for FFX, and the result is a set-up that finally gives you the time to take a break and analyse your options, in order to formulate the best possible strategy for your battle. While the pace is a teensy bit slower now, the turn-based system is still a much better alternative to the Active-Time Battles of old, which invariably forced me to go straight for the strongest attack every turn because I just had no time to consider any other strategies. And besides, the battles are always great fun, and this is the most important thing (after keeping yourself alive and breathing, of course).

Not as fun, however, is the random nature of these battles. Whilst not a deal-breaker, the use of random battles in FFX occasionally make it seriously unpleasant to play. OK, so most of the time the developers skilfully manage to balance its random battle sections with cut-scenes or other such enjoyable rewards, but there are occasions when the game takes the former too far. Every three hours or so, it puts its foot down and firmly tells you, “Now it is time for random battles. You are to trek across a big expansive area, enduring the aforementioned random battles, with no savepoints until you reach the end. We hope you like hearing Uematsu’s battle theme 50 times. GO.”

I got serious headaches from these sections of the game, because I kept playing for well over what my body could endure, hanging on for a savepoint that simply wouldn’t come. I will never forget the instance where, having valiantly fought over a dozen random battles and found all of the area’s items (forcing me to take more steps and thus fight more random battles) for about forty minutes, I died. My zen abilities allowed to control any external outbursts, but, deep inside, I was absolutely furious. The hell if I was going to play this game anymore! All Squaresoft needed to do was add just one more savepoint in these expansive sections, and such nonsense would never had to have been endured. A shame. 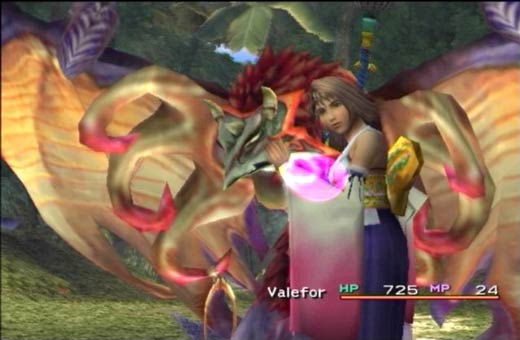 In the end, I did continue playing the game, despite my frustration. I think one of the reasons why I did, and something which is worth mentioning, was the fantastic and mesmerising world the game offered me. I don’t know bully about world design or character design or what have you, but FFX’s Spira is a wonderfully realised fantasy location, packed with natural wonders, magical spirits and towns brimming with life. The colours, the scenery, the sparkles, the music…it all adds up to a living, breathing world that just seems like such a feast for the senses. For me, it’s nice to know that, inside my little FFX: International Edition game disc, lies the amazing world of Spira.

With regards to length, make no mistake, FFX is BIG. The main game took me  roughly 50 hours to finish, and beyond that, there are a ton of things to do after having slayed the final boss. Unfortunately, there is little incentive for any normal player to actually do any of them. Why? Anecdote time! In order to acquire one of the secret summons available in the endgame, I was told me I needed to solve a puzzle in every one of the game's temples that I’d visited thus far. Fair enough. Only problem is that these temples are guarded by almost sexually difficult Dark Summons, that have insane amounts of HP and inflict 99,999 damage with every hit. Apparently, in order to beat these horrors of unfair game design, I needed to acquire every character’s secret weapon, but the rub is that, strangely enough, the only way to get these weapons is to defeat the Dark Summons! The endgame portion of FFX demands dedication but simply isn’t any fun, so only obsessive maniacs will be bothered enough to persist.

So, there are strong goods, and strong bads, and my enjoyment of FFX during the last few weeks depended on precisely which of the two categories I was exposed to at any given time. My opinions were flip-flopping all over the place, but, in the end, I have accepted that the game has acted as a dear friend to me for over a month, and a hated enemy for only several sporadic days. Overall, the goodness comes out on top, and Final Fantasy X will stand out in my memory as an epic, touching masterpiece, hindered, but never stopped, by its various design issues and flaws. Rating 7.5 out of 10

Disclosures: Final Fantasy X: International Edition, a version available only in PAL territories and Japan, was obtained via retail store and reviewed on the PS2. Approximately 55 hours of play was devoted to the main quest and side-missions.

Parents: According to the ESRB, this game contains blood and violence. Though the ESRB claims that FFX features "blood," from what I have seen, there is almost no blood in game at all. That said, there are some moments that are very intense and dark in tone, and these may be scary for younger children.

Deaf & Hard of Hearing: The game offers subtitles for every word of dialogue and there are no major instances where sound influences the ability to play the game.

Sorry for the confusion Aoki. This was one of the first user reviews that we posted as part of our new initiative to publish user reviews. We may or may not change what we call these pieces.

What’s this? Is there a new FF game called FF10 Redux? If not, why is someone writing about a game from a previous console generation. He says nothing new. I didn’t understand the point of this. I’m confused…