As Goes the Heavyweights, So Goes Boxing 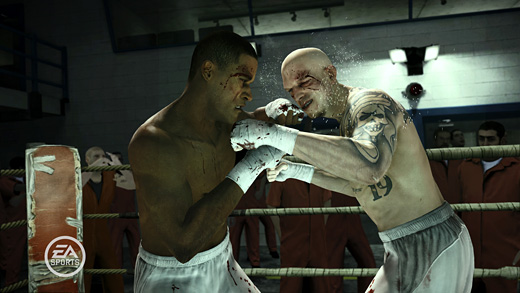 LOW Controlling a fight for nine rounds, only to be instantly knocked out by poor collision detection.

WTF The feeling of watching my boxer, with my face, get pummeled mercilessly into unconsciousness.

"As goes the heavyweights, so goes boxing." It's an old adage often applied when describing the state of boxing. If the heavyweight division is healthy and exciting, then boxing as a whole profits. Looking back at the history of boxing video games, the adage still holds true. The last time everyone paid attention to boxing was when Mike Tyson was champion. And the last time everyone paid attention to a boxing game was when Little Mac was Tyson's challenger. Since then, many champions have attempted to hold the sport with the same exciting dominance; likewise, many boxing games have attempted to rise up as the champion of the sport for video games. EA Sports offers up their latest attempt with Fight Night Champion

Fight Night Champion takes a new approach to the series single player mode. Adding on to the standard, "create-a-boxer" mode from the game's predecessors, FNC introduces the titular "Champion Mode." In a smart move, Champion Mode serves two purposes, one of which is to tell a high-drama tale of the fictional prospect Andre Bishop.

Throughout the story, Andre runs into nearly every boxing stereotype. From the crooked promoter to the sagacious, old trainer, the characters here are nothing new. Luckily, the high production values and quality voice acting at least keep a familiar story arc interesting. Brian Kenny's post-fight boxing updates, ripped straight from ESPN's "Friday Night Fights," give an appreciated dose of realism to the experience. However, while the identifiable boxing personalities and references are entertaining for a boxing fan like myself, the story doesn't really stand on its own. The overall flatness of Andre himself robs the player of the ability to identify with the fighter, and despite our thirst for knockouts and violence, it is the personality and character of a fighter that keeps us boxing fans intrigued.

Fortunately, Champion Mode serves an secondary purpose. Each of Andre's fights are set up around various realistic scenarios that can occur in the ring. Sometimes an opponent has a dynamite punch that can and will drop him at the first blow. Other times, Andre is forced to press for a knockout in order to keep the decision out of the hands of crooked judges. In varying the dynamic of each fight, Champion Mode acts as a training ground in which the player learns to maneuver Andre as a real boxer instead of throwing him headfirst into uppercuts, armed with nothing but button-mashed left hooks. By the end, I had a greater understanding of what techniques and strategies are required to overcome a variety of disadvantages in any match-up. 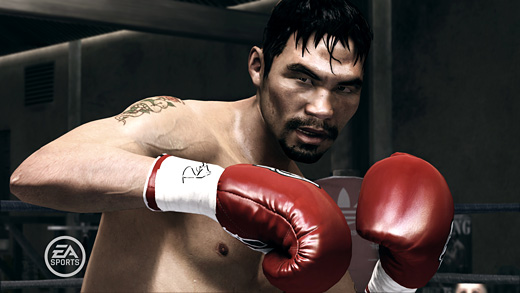 The ability to successfully employ these boxing techniques is likely what EA Sports was going for, and they kind of succeeded. Quick, fluid combos come easier than in previous iterations thanks to revamped punching controls, and they look more realistic than ever, as many of the singular punches look like they belong together when thrown in combination. It's also now possible to punch from a block, so smart brawling is encouraged. Unfortunately, boxing isn't a sport of just brawling. Many boxers ply their craft by controlling distance and befuddling their opponent with footwork, but the mechanics available aren't really conducive to such styles.

This is evident in the difficulty I had in landing straight punches. There were many times when I input a hard straight counter, only for the game to decide that I was too close to my opponent, opting to interpret my input as a short hook that falls way short of where I intended my fist to be. To counter this effect, I would then back up, only to have my fighter take one giant stride away from the opponent, creating a distance in which no punches, not even my gangly jab, could reach my opponent's face.

Such slip-ups are forgivable in the single player, but they create some pretty disastrous results online, where the addition of random, one punch knockouts has turned every fight into a game of roulette, regardless of skill. Often I'd be dominating a fight, overcoming the game's sluggish footwork while gradually grinding away at my opponents stamina when, out of the blue, he lands a random, grazing punch that puts me out cold. It happens in boxing. It doesn't, however, happen 50% of the time.

That's not to say I didn't enjoy myself. I felt great when my online boxer, outfitted with an eerily accurate depiction of my face, was able to box circles around a foe who's relying on that one lucky punch to put me away. Every time I purposely slipped an opponent's punch and returned with a precise, pounding combo, the game reminded me of just how sweet the sweet science can be, more so than any other entry in the Fight Night series. It was easy for me to moan about restricting mechanics when I'd just been laid out, but when everything was working as intended, it was hard not to feel a bit proud when my focused adherence to a game plan culminated in a glorious last round knockout.

In a way, the Fight Night series is a lot like the current heavyweight champ, Wladimir Klitschko. Klitschko has been criticized in the past for being too boring and rigid, and a lack of suitable challengers doesn't help his division; but each time he gets in the ring, he gets closer and closer to what everyone wants him to be. Maybe next time he'll be able to put it all together, and everyone will once again take notice. "As goes the heavyweights, so goes boxing." And boxing games, too. Rating: 7.0 out of 10.

Parents: According to the ESRB, this game contains blood, strong language, suggestive themes, violence. The game contains the violence expected in a realistic boxing game along with language coarse enough to warrant an M rating.

Deaf & Hard of Hearing: No subtitles in either the cut-scenes nor during gameplay. Important gameplay events, such as stunned-states and counter-punch opportunities are indicated visually, so sound cues are not too important. Cornerman advice is typically unimportant, and any important information during Champion mode is given either in the right-hand corner during gameplay, on the pause screen, and also on the game-over/retry screen.

Looks like I’m definitely going to have to try this one.