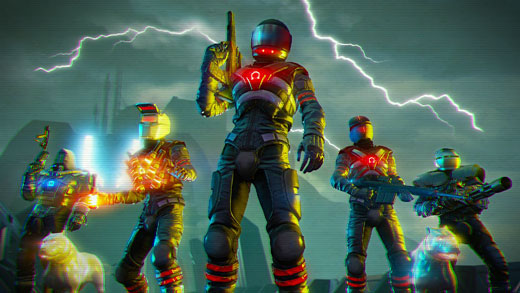 In the far distant future of 2007, Mark IV Cyber Commando Sergeant Rex Power Colt kicks some serious ass. With his cyber eye, bionic arm, and smooth moves with the ladies, there's no post-nuclear disaster he can't extinguish. At least, until a rogue cyber commando plans to reset humanity back to factory zero with dinosaur-blood infused missiles, pushing Rex to the limit of his superhuman abilities in order to save mankind.

Sound ridiculous? It is, and Ubisoft Montreal wants it that way.

takes place in 2007, it's not the year we knew where the Wii had already launched and the first iPhone made its appearance. No, it's a Terminator-meets-Tron 2007 as imagined by people who still watched VHS tapes—an incorrect vision where the planet saw massive nuclear war, lightning storms constantly rage, and where everything is lit by colored fluorescent lights.

Blood Dragon is a download-only, stand-alone, re-skinned Far Cry 3 that does not require Far Cry 3 to be run. The gameplay is nearly identical to its source, for better or worse, and because the campaign is far shorter (4-5 hours) it's concentrated and paced accordingly.

From the start, Colt has a portion of the upgrades that require time and experience to unlock in Far Cry 3 proper. As Colt levels up (which happens frequently) skills unlock themselves, rather than the player having to sort through a tree to decide which ones to spend points on. Blood Dragon's auto-unlocking system worked for me because in Far Cry 3, I'd often have multiple points available to buy skills, but I'd rarely use them for fear that I wouldn't use or need what I’d unlock. Blood Dragon took this hesitation out of the equation, and it's much better for it.

Though the skills are modified, Blood Dragon still features an entire open-world island with multiple side-quests in addition to the main one. It cuts some of Far Cry 3's fat out, though.

The climbable radio towers, syringes, upgradable wallets/ammo belts, second island and other trappings from Far Cry 3 are gone. However, a handful of wild animals, upgradable weapons, explosives, vehicles, scattered collectibles, enemy bases ripe for capture and more are still here. It’s on the short side since I finished the campaign, captured every base, completed all side-quests, found every collectible and earned 16 of 19 achievements in about six hours. With a $15 price tag, I can't complain though.

However, putting all the nuts and bolts aside, the real selling point of Blood Dragon is the crazy re-imagining and irreverence that marks it as a big departure from the base game. Character and attitude are constantly spilling out from Blood Dragon as a first-person shooter (FPS) that pokes fun at FPSs, but not in a pretentious way.

In the opening tutorial, for example, a screen will pop up that asks the player to press a button to show that he or she can read, thereby clearing the screen for the next tutorial pop-up. Meanwhile, Colt can be heard mumbling in the background about how he hates tutorials and just wants to kill things. Additionally, any time a new objective is shown, Colt will audibly ask "HUD" to make a waypoint for him, as if to say that FPSs now can't exist without constantly pointing the player in the right direction. The humor can go both ways, though—the writing is either genuinely hilarious or cliché in a cringeworthy, B-movie vein.

Despite the humor and neon visuals, the bottom line is that Far Cry 3: Blood Dragon

is essentially more Far Cry 3 in a differently-skewed universe. It has all the identical hunting, shooting and exploring thrills 3 had, only now in a shorter, concentrated package. It's fun to see developers and publishers throw caution to the wind and release games injected with attitude and character. It's just a shame that it's more trendy to play it safe and release them as shorter downloadable titles than $60, full-retail games. Rating: 7.0 out of 10.


Disclosures: This game was obtained via digital purchase and reviewed on the Xbox 360. Approximately six and a half hours of play were devoted to the single player campaign. It was completed once and all optional side quests and collectibles were cleared. There are no multiplayer modes.

Parents: According to the ESRB, this game contains violence, blood, sexual content, nudity and strong language. It's main gameplay centers around killing people, cyborgs and animals with guns, knives and explosives. Strong language is liberally used throughout the campaign and there is one sex scene which features male and female nudity.

Deaf & Hard of Hearing: This game rarely uses audio for significant gameplay enhancement. Subtitles are available, and the game features a visual system that shows when enemies almost see the character and when they're fully alerted to his presence.