Violence is a Disease 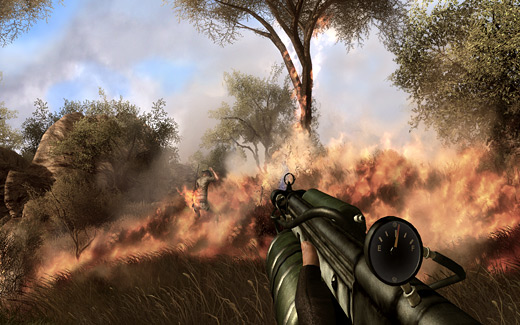 HIGH That revelatory moment when the game's brutal message finally sinks in.

LOW The ending sadly seems to dodge that brutal message more than it should have.

WTF In a late scene set in the prison, your ability to shoot is inexplicably taken away from you.

"Violence is a disease. It infects everything it touches." – The Jackal.

How often have you murdered someone in a video game? Not killed; murdered. While very similar, there is a massive chasm between the two words. The former is impersonal, even flippant, with little emotion attached at all. The second is more heinous, more personal. Killing is mechanical; putting a bullet into someone's head. Murder involves snuffing out someone's very life. What is remarkable about Far Cry 2 is how well it leaps across that chasm, turning the player from a typical killer into a monstrous murderer.

A few basics first: Far Cry 2 is a fairly standard first-person shooter, set in an open world sandbox. The game takes place in an unnamed African country (heavily hinted at being the Congo) and sees the player charged with the assassination of a foreign arms dealer, named The Jackal, who has been arming both sides of an ongoing conflict. This pursuit and the discovery of an increasing ambiguity to the Jackal's motives form the basis of the plot.

And yet this plot vanishes, for large chunks at a time. Most of the missions have nothing to do at all with finding the Jackal. Indeed, many of them have players accomplishing tasks that seem directly counter to their own interests. (For example, blowing up a store of malaria medicine even while the main character suffers from malaria himself.) Other missions endlessly repeat: Arms dealers will always ask the player to blow up a convoy of trucks for them; mysterious phone towers have assassination jobs ready at all times. During these tasks, the majority of the game, the issue of the Jackal vanishes.

Bit by bit, the violence becomes violence for its own sake. Soon, your character is rampaging through the African jungle butchering anyone with the poor fortune to be seen, and the game strips away any sense of heroism or righteousness in these actions. 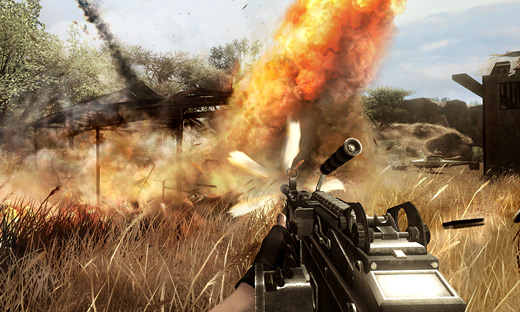 Enemies throughout the game respawn, and there's nobody who isn't hostile. The game wants the player to be paranoid, to see everyone purely as someone needing to be shot, and a threat around every corner. Enemies tumble as bullets spray into them, a second later to be ripped open by a machete, the player looking right into their eyes as they die. When the game began, one may wonder why every jeep rammed them before the enemy even worked out their identity. By the end, smart players will be just like them: Shooting them before they could shoot first. While the game has been (justly) criticized for repeating its mission structures, even this aids the message of the game: To some degree (not completely, I think, but somewhat) this too seems intentional; a desire to train the player to perfect certain brutal skills. At the start, a single car can prove a challenging obstacle. By the end, it's trivial to lay waste to entire convoys.

The game responds to this brutality as well, breeding this monstrosity and highlighting it. A reputation system sees your character's personal legend grow, with enemies who initially bark out contemptuous orders soon turning to screaming in fear and running. The player's only allies, other mercenary "buddies," go about their own (patently horrible) goals and before asking for assistance. That the player could have been any one of them (at the start of the game, any one of the buddies can be selected to play) reinforces the message: You are one of them.

This is what strikes me about Far Cry 2, and why I'm so enamored of it. It's not that it's a well-executed shooter. (Although it is.) It's not that it's a commentary on video game violence. (Although it is that too.) And it's definitely not that it's a perfect game. It isn't. There are flaws throughout: The cut-scenes break the flow of the story and weaken the authority of the player, which the game otherwise does such a good job in maintaining. Late scenes inexplicably limit your ability to act on your own desires. While party intentional, I don't doubt that a bit more mission variety would have been welcome. Mike Doolittle is absolutely right that enemies needed to respond more to gunshot wounds. And the ending is, make no mistake, a cop-out on the message set up throughout the rest of the play.

But that message! The underlying story's method still amazes me. It's the way the story and message are told in minor keys and subtext, through gameplay mechanics and structure, rather than through cut-scenes and dialogue. The dialogue is mostly a red herring, the few cut-scenes merely a way to keep the plot going. The story is all constructed by you, the player. This is a game that inherently rejects the notion that being "an interactive movie" is a good thing. It doesn't want to be cinematic. It wants to explore what kind of art a game can do that no other medium can. It succeeds, even if only partly.

Which is still an impressive achievement, in my opinion. Rating: 8 out of 10.

Disclosures: This game was obtained via retail store and reviewed on the Xbox 360. Approximately 50 hours of play was devoted to single-player modes (completed once) and a couple of rounds at best to its multiplayer mode.

As cinematic as the experience can be, I’m afraid that Far Cry 2 is an excellent example of a game’s art interfering with the gameplay. Someone decided it would be a good idea to cover the African savanna with shrubs and tall grass. This is an excellent idea, since the genuine African savanna does in fact have shrubs and tall grass. However, that same someone forgot to tell the AI programmers that the AI should probably not be able to see through the lush foliage and tall grass, since, after all, most African militiamen and mercenaries are not Superman, and… Read more »

Since writing the review, it’s been completed twice.

Is this game really 50 hours long?

We seem to be on the same page about this game. I was also enthralled by the all-encompassing savagery, the feelings of sheer desperation and physical immediacy. At some point, engaging with the game became so cold, so mechanical… and yet I couldn’t put it down. I had to see it through, and experience the full implications of my actions as a player. Far Cry 2 is indeed quite unique in its own subtle tweaks to the first-person shooter formula, and I can’t wait to see what Clint Hocking does next.