"The absence of death in most people's early years creates a psychic vacuum of sorts. For many, thoughts of a nuclear confrontation are one's first true brush with nonexistence, and because they are the first, they can be the most powerful and indelible." The Wrong Sun, Douglas Coupland. 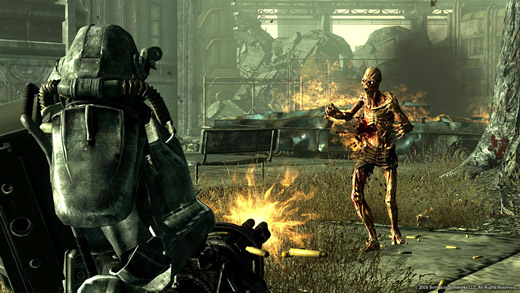 HIGH It's Oblivion... with guns!

LOW It's just—sigh—Oblivion with guns.

WTF How does putting on a lab coat make one better at science?

Nuclear holocaust is never far from people's minds. It is the fear to end all fear—that an advanced civilization might destroy itself through the marriage between science and ego; that a nightmare rain may fall that brings fire and ruin to the Earth, leaving behind nothing of mankind but rubble spattered with raytraced shadows of death. A scenario of such pure dread that people often wonder whether it would be better to die in the initial conflagration than survive and face the uncertain future of endless nuclear harvests. It is into this scorched cradle of a possible tomorrow that the protagonist of Bethesda's Fallout 3 is born, at first consigned to a bunker (Vault 101) in the suburbs of Washington DC, but never destined to remain.

In the alternate history leading up to this event, the Cold War thawed into all-out conflict between the USA and China. The bombs fell. Humanity survived, but rather than starting over and building a utopia, it has sleepwalked into a world of lawless conflict, community clinging on in small clusters, attempting to recreate the forgotten dream of society, never far from a relapse into war. Whether the protagonist becomes a catalyst for collapse or a defender against it is undecided, and it is with this burden of freedom that the player must blink the sunlight out of his or her eyes and leave the womb-like Vault 101 and set out to discover who they are.

Welcome to the Capital Wastelands, a world frozen in a futuristic vision of the 1950s, a charred photograph of the era of DC Comics, Beatniks, and the beginnings of the Civil Rights movement (mutated now into smooth skins versus ghouls), airbrushed with the technology that people those days dreamed of—from nuclear cars to household robots. It is a world steeped in cultural references and nuance. Indeed, each house in the wastelands still standing offers its own story—who were the inhabitants? How did they live? And how did they die? Corpses are to be found curled up in bathtubs, embracing in bed, or inches away from guaranteed survival in a shelter. The world is vast and open, with only the inner regions of what was Washington DC compartmentalised by debris, linked via subway systems. It would be challenging to see everything there is to see, and that is regardless of the existence of downloadable extras. This playfield is richer even than that portrayed by Bethesda in The Elder Scrolls IV: Oblivion, perhaps not as large, but far more impressive in its details and texture.

While publicizing this title, Bethesda distanced themselves from the idea that Fallout 3 was Oblivion with guns, which is funny because that is pretty much how it plays. There are many similarities between Fallout 3 and Oblivion: both offer an open ended world for the player to investigate in the style they see fit; there is a main quest for the player to accomplish, but it is more than possible to forget about that completely and lose oneself amongst the detritus; plus there is usually more than one way to accomplish a goal; Fallout 3 even offers enchanted clothing. On the other hand, of the few differences: a large one in Fallout is that skills are doled out from a central kitty, earned by various achievements, like discovering new places, whereas in Oblivion skills are honed through repeated practise (more realistic perhaps, but leading to ridiculous scenarios where it makes sense to jump up and down on the spot a hundred times to improve one's acrobatics a little). 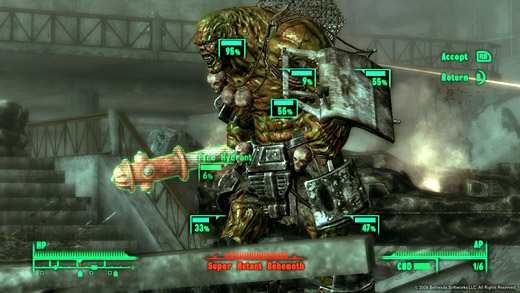 Another change is the introduction of the VATS targeting system, which breaks the action out of real time and allows enemies to be targeted in turn and shots queued up dependent upon a number of action points. It's a nice idea, but the set-up rarely gives a reason to do anything but aim for the head. So rather than each encounter being a Halo-like cat and mouse struggle, it is more a race to freeze time, queue up shots, and sit back as the action plays out. While Fallout 3 was never meant to be all-out action, it seems mired somewhere in the middle between this and role playing: a player is not forced to use VATS at all, but not doing so is a weak option since shooting real time is a huge waste of ammo and highly inaccurate. It would be nice, too, if the stealth approach didn't so often leave the protagonist forced to resort to fighting, not through their own mistakes, understand, but because of the design of the various buildings.

As with any imagined world, it is all too easy to see inconsistencies, and not just the obvious things like how come there is a weird mix of futuristic technology (lasers and robots) alongside 1950's kitsch. It seems that the nuclear war is intended to have occurred years from now, yet how come computers never evolved beyond 1980s terminals? Other subtle things grate, too: in the Fallout 3 world itself people tend to know things as soon as they happen like magic. For instance, a karma system tracks whether a player is good or bad, which is fine, but it breaks the fourth wall when all the non-player characters know right away if the protagonist waltzed into someone's house unseen and stole all of their pots and pans.

What hurts Fallout most, though, is what happens as the protagonist grows in their powers. Fallout 3 apes Oblivion in that when the protagonist increases in level so do all of the enemies in areas that have not yet been visited relevant to the main quest. There are pros and cons to this; mainly, it is a little weird—while the enemies are tweaked to balance the experience, locks and other skill-based checks have fixed values, and often the hardest to open doors and containers have little exciting inside when the player returns to them. Regardless it soon becomes more than possible to deal with any enemy—skills hit the ceiling far before the end if the player indulges in even a little side-questing, and it's then that the VATS system particularly drags. Worse, with no factions to rise to the top of, unlike the guilds in Oblivion, the ultimate purpose of the game soon becomes the completion of the main quest and for reasons probably to do with the coding nightmare of scripting a fallen world back on the road to redemption, after the main quest's completion everything just stops and that's it. The end. It's almost like a nuclear bomb went off. In fact, that would make a better resolution than what is offered here.

Presenting a compelling vision of an alternate future history, Fallout 3 is a memorable experience. That it cannot escape its own limitations is not surprising. Any attempt at a open-ended world without rules through the medium of a computer program, which must necessarily be steeped in rules, cannot work. This problem is perhaps no better illustrated than by an inventive quest that occurs along the main plot line, and is allegorical to our own struggle as beings in this nuclear age: we as flawed creators cannot create that which is without flaw. So in conquering the atom we awaken new fears that mean we must constantly flinch and maybe wonder, albeit fleetingly, if Armageddon is upon us each time lightning crashes over a backdrop of international unrest. Fallout 3 is an imperfect yet important work in documenting humanity's cultural history of fear and is highly recommended. Rating: 8.0 out of 10.

Disclosures: This game was obtained via retail and reviewed on the PS3. Approximately 60 hours of play was devoted to single-player mode (completed 3 times).

Parents: According to the ESRB, this game contains blood and gore, intense violence, sexual themes, strong language, use of drugs. There are some particularly gory action scenes and bad language, plus some missions with goals that parents would likely not consent to their young teens playing through and likely to cause offence. Not suitable for young children at all.

Deaf & Hard of Hearing: Subtitles are present although sometimes some dialog parts are subtitled while others are not during the game. Visual clues are present that tell the player which direction damage is being taken from, though the game is fairly hard to play just relying on these.

FO3 made me cry. FO1 and FO2 made such an impact on me when they came out. This was at best bland and ultimately unforgettable, and at worst really not much fun at all, at least for someone actually expecting sophisticated rp elements in the game. The simple reality is that it is not much like FO1 or FO2, in any aspect of gameplay. It’s true that you couldn’t release a clone of FO1 or FO2 today and expect it to be commercially acceptable, but by the same token there had to be more than a superficial connection between FO3… Read more »

Good analysis…every once in awhile I would catch myself agreeing it was epic, but then again I remembered playing games like EverQuest, Super Mario 64, etc, which all lead in their respective genres.

Ive yet to see a review of Fallout3 that compares it to the original Fallout, and not to Oblivion.

I agree with the first comment here and your review. 8/10 is a very fair score for Fallout 3. Too many gaming magazines and media outlets have hailed this game as ‘revolutionary’ and ‘epic’ when I just don’t see those qualities in it. Fallout 3 is a good game, maybe even a great game, but certainly not an exceptional game.

[quote=Crofto]***(which ism’t the case for 90% of players with Fallout 3 – them believing that the game is a masterpiece which is beyond laughable).[/quote] Why do you believe Fallout 3 isn’t a masterpiece?

***(which ism’t the case for 90% of players with Fallout 3 – them believing that the game is a masterpiece which is beyond laughable).

An 8/10 is certainly the most appropriate score for Fallout 3, and well done on the review.

It’s good to know there are a good few gamers who can still be impartial and know what is actually good and bad in a game; even better to know that some gamers can enjoy a game but still accept that it’s not superb (which is the case for 90% of players with Fallout 3 – them believing that the game is a masterpiece which is beyond laughable).