A Spreadsheet with Great Music 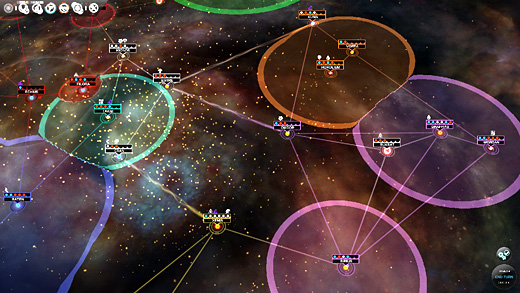 HIGH The soundtrack easily lulled me into the one-more-turn mentality.

LOW The tooltips and tutorials leave much to be desired.

WTF That's how I control my fleet of galactic destruction?

Being Lord Diva, Her Holiness Supreme of the Sophon empire is a grand position.

It is also lonely.

Court musicians strum lovely orchestrations that keep me busy picking over the electronic ledgers in front of me. My home solar system has finished building my latest fleet, and while I could install a governor to take care of its individual whims and pressing concerns, it is this minutiae that soothes me.

These things define my position and grant me the title of Lord Diva, Her Holiness Supreme of the Sophon empire, and I exist in Endless Space.

It is the future. There is a currency called Dust that rules everything, and all require its use to unlock the mysteries of existence, as given to us by the Endless.

As is typical in a space-type 4X strategy game, the goal is to rule over the entirety of known existence. Become The One by exploring, expanding, exploiting, and exterminating. Ascend to the elite. Call the crème de la crème of galactic society your home, and charge speaking fees after you've retired.

…Or, at least, that's the ostensible goal. In reality, there's not much of a story behind Endless Space

Strategy games that act as glorified spreadsheets do not necessarily require stories, but it is the lack of interacting with anyone or anything close to sentient that makes Endless Space seem a hollow experience: instead of having talking heads or even citizens represented by a symbol, I am left wondering if I am the only person in the entire known galaxy. In essence, I am a child playing alone with LEGO spaceships and planets, confined by rules, and talking to myself constantly.

An excellent soundtrack riffed behind me as I sank in hours at a time, though never quite sure what pressed me on in the first place.

Battles are a rock-paper-scissors game of picking cards that will trump the other player or AI, but has no actual input from me. Diplomacy is a list of actions to take, but possessing no real flavor text, nor giving any impression that I am actually interacting with anyone.

After winning my games and achieving different victory conditions, I was greeted with graphs of how I performed in varying avenues—I earned a cookie for first place here, while perhaps not doing as well over in this other score metric over there. There was no story told, however. While I was introduced with a small intro video on my race, my victory was only so much fluff: an inevitable end that I could ignore wholly if I desired.

Explore. Expand. Exploit. Exterminate. For what, however?

Strangely, I can't say that I disliked this empty experience. I would easily sit down and not notice that five, six, or even seven hours had gone by. Mechanically everything fits. The bones of a good 4X game are here, it's just that playing feels like staring into an endless void, with no real shape to the experience of what I am gawking. It was easy to lull myself into a rhythm since there was nothing actively wrong, but there was also nothing drawing me in. It was simply Space before me.

Given enough puzzle pieces and the proper setup, I can motivate myself to get through a dry, underdeveloped RPG. Given Endless Space

, I build a fanciful world where I am a formerly brilliant scientist of the Sophons, now gone insane and reclusive, while reenacting the Lord Diva, Her Holiness Supreme's ascension to power, forever trapped with my own voice echoing in my head. Rating: 6.0 out of 10.

Parents: At the time this review was written, a final ESRB rating was not available. There are depictions of ship battles played out, though they do not show the beings controlling these ships, so the violence is general. Invasions and other aggressive actions are handled in a purely perfunctory factor. Everything in the tech tree has to do with the generalities of improving life and commerce, rather than getting into specifics.

Deaf & Hard of Hearing: The sounds in this game can be turned off with little to no effect on gameplay. Notifications pop up regardless, and there is nothing where sounds are required to inform the player that is not covered via other options.