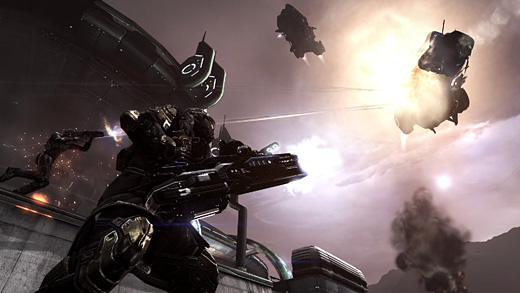 The term "Space Marine" has always been something of a misnomer. For all the "space" implied in the name, the vast majority of space marines do their fighting on good old terra firma. And while that same basic contradiction is true for Dust 514, there's no denying that its success, in this case, could connect gamers to the stars in one of the most ambitious ways imaginable.

Coming from CCP, the makers of the notorious sandbox space-MMO EVE Online, the PlayStation 3-exclusive Dust 514 represents the company's first foray both into action-game territory as well as the "walled garden" of the console market. For a company whose main claim to fame is derided by some players as "spreadsheets in space," the transition to the crowded fields of first-person shooting seems a very strange one indeed.

In truth, though, it isn't that strange. Anyone familiar with EVE Online, even just through the stories its players generate, will know that it's come about as close as anyone has yet to that ideal of a truly massive "massive multiplayer game," the seeming pipe-dream of a truly "emergent" world that players truly inhabit, influencing each other as well as the world at large. More than most of its genre peers, EVE Online feels real. And CCP knows that fact well enough that "EVE Is Real" is the company's tagline.

Except, how "real" could EVE's universe be if its would-be conquerors, its inhabitants, were permanently stuck in orbit? That's where Dust 514 comes in. It is the battle-scarred face of all those pretty planets that were little more than scenery to EVE Online's space pilots, and a way to expand that universe's reach from the stars to the ground under armored boots.

That connection from earth to orbit is the key. While EVE isn't the first game to spawn a related game of a differing genre, Dust 514 is no mere "spin-off." The immortal clone footsoldiers of Dust 514's mercenaries may be playing on the PlayStation 3 while the immortal clone starship captains of EVE play on the PC, but their worlds are closely linked in ways that are (to date) unprecedented, giving both audiences a glimpse of CCP's vision. It's a vision that promises Dust 514's console-bound players will feel like—and actually be—part of something bigger than themselves, an emergent, living universe full of unique, you-had-to-be-there stories of conflict, betrayal, cooperation, and profit. It's a universe where drama isn't baked into a rote questing treadmill or ephemeral scripted rollercoaster campaign. 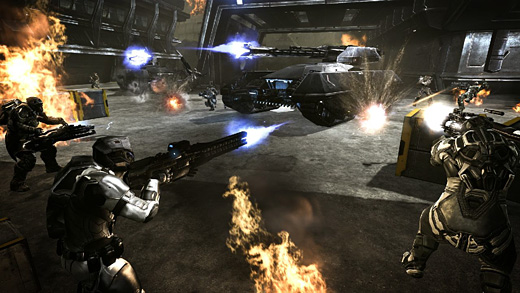 That's the idea, at least. To a new player, one entering Dust 514's world sight-unseen, possibly drawn by the game's free-to-play business model, the appeal isn't immediately apparent. Though Dust 514's embrace of iron sights and shooting men is generally a more "accessible" set of mechanics than the heavily menu-driven systems of EVE, CCP's approach to first-person shooting ends up in some ways almost as intimidating as its approach to space travel.

Upon starting the game players are asked to make a number of choices virtually blind, then dropped almost straight into the deep end, materializing in the equivalent of a space-lounge to find themselves a fight. But before that they'll have to configure things like skills, equipment, and their dropsuit, in highly granular detail. In a fashion that's distressingly similar to the in-universe concept of players being clone mercenaries, starting out in Dust 514 almost feels like actually starting a career.

That may be what CCP is going for, in truth. Just as EVE itself is almost opaque to a player attempting to start on their lonesome, Dust 514 is at its best when you're working with others as part of a mercenary company, ideally attached to one of EVE's player-run corporations. The whole idea—and incentive—for EVE players to engage with Dust 514 players is that the EVE players hire them out to conquer planets that actually exist on EVE's star maps, and can be exploited for resources and regional control. For their trouble, Dust 514 players gain funding they can use to upgrade, as well as some direct support in the form of massive artillery strikes, available from friendly EVE players sitting in orbit.

Furthering the career aspect, Dust 514 players are encouraged to set "schedules" by which they can regularly defend territories they've conquered, to preserve bonuses that come from holding them. Dust 514 corporations fight each other and make war by first setting terms of engagement and "contracts" in a manner that's akin to gambling with the in-game currency, ISK. Winners of conflicts take the pot and funnel the earnings into growth.

Rather than the typical incentives of more experience points or periodic unlocks, Dust 514's rewards are at times more abstract. On occasion it's not easy to see an immediate concrete result for a given match, besides the knowledge that you've helped your comrades (and hindered your enemies). Of course, there is money, but earning a paycheck doesn't feel quite the same as the familiar Call of Duty level-up guitar riff and the like. It takes more time and dedication to appreciate the way Dust 514 raises the stakes. 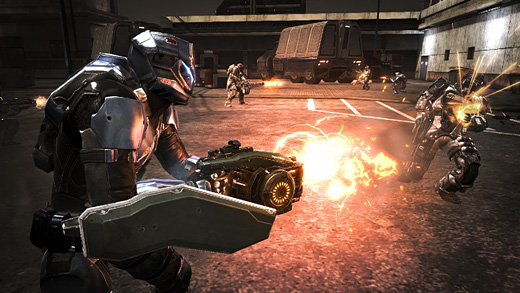 It's all fascinating, and truly engaging once you get immersed, but Dust 514's biggest challenge is grabbing the larger, less-informed mass of players just out to play space-soldier and turning them into career veterans. At the moment, those still-murky opening hours are, to the soloist, a potential turn-off. Dust 514 asks for commitment but has the frustrating tendency to play it coy when it comes to what that price nets. As with its spaceborn big sibling, one can't overemphasize the benefits of finding a crowd of friendlies to roll with early on.

Despite all this ambitious meta-gaming and cross-platform integration, much of CCP's efforts would be for naught if Dust 514 fell flat in its foundational gameplay. It's fortunate, then, that it hasn't. Not completely, at any rate.

Thanks to the Uprising launch update, a massive graphical overhaul and content tweak that seemed to mirror CCP's penchant for large, free expansions to EVE, Dust can just barely hold its own in a crowded field. It doesn't quite approach the refined compulsions of Call of Duty and the large-scale bombast of Battlefield (thanks to numerous vehicles Dust 514 is closer to the latter than the former), but the rough edges are smoothed somewhat by the low cost of entry. If you own a PlayStation 3 and have an internet connection, you can theoretically hook up to Dust 514. CCP is counting on that open-armed approach to help newbies get over the initial hump of learning the ropes and keep them playing long enough to get them hooked on the meta-game, and hopefully not repelled by a microtransaction-based business model that at times borders on sleazy.

The catch is that while players can buy nearly anything in Dust 514 with ISK earned through play, much of those things, like vehicles, advanced armor and weapons, or special attacks are single-use items, and in some cases are lost as soon as a player dies. And they're expensive, with some items costing several rounds' worth of earnings to purchase. Players can opt to spend Aurum (currency bought with real money) to buy self-replenishing "blueprints," to skirt this annoyance, as well as special item bundles, but it can't help but feel somewhat dirty, especially for a player unfamiliar with EVE's cutthroat market philosophy. On paper this is a fascinating way to raise the stakes and encourage a form of accountability, but in practice it's a rare game that can make balancing a budget fun, and despite its best efforts, Dust 514 isn't it.

Once again, this underscores the importance of getting with the community, who at the time of this writing have dived headfirst into the game, their corporations offering training, free items, and comfortable hierarchies to newbies. Just as with EVE, it seems, a life as a lone wolf in Dust 514 isn't much life at all.

But there is hope. Under intimidating façade and beyond the still-unrefined mechanics lies unparalleled ambition and glittering potential. It's going to take time and commitment to get Dust 514 to the peak of where CCP hopes it will reach, but more than any other company out there, that's what CCP seems to have. Its soldiers can take comfort in that, at least.