A Great Concept Marred by a Flawed Execution 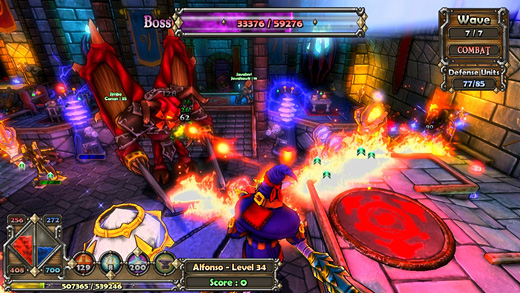 HIGH Finding a great piece of equipment and then making it even better with upgrades.

LOW Going through a level with ease, only to get crushed by the final wave.

Role-playing games (RPGs) are my favorite genre and tower defense is my second, so it was with great anticipation that I awaited the release of a hybrid blending them, Dungeon Defenders

. I finally got a chance to play it, and was sadly disappointed with the finished product. I greatly disliked the game from the first few minutes, and though my opinion improved to "moderately entertaining" after trying the multiplayer and leveling up a bit, all I could think was that it was a waste of a great concept!

So what went wrong?

For starters, the game does a horrible job of welcoming new players. Rather than having an interactive tutorial along with a quick reference guide like most games, Dungeon Defenders's only tool for educating new players is a dense, four-minute-long tutorial video. It's a horrible way to start off, and it's intimidating for casual players to be given so much information in such a short period of time. Even experienced players may find it to be a bit too much to take in all at once.

After the tutorial video, the player picks one of four playable classes and gets down to the business of defending dungeons. Enemies advance towards the player's crystal and it's up to them to stop them via towers (each class eventually gets several to choose from) and direct attacks (melee, ranged, and special). Between levels, the player can visit a tavern to purchase and upgrade equipment, change the difficulty level, and try a number of optional challenges like beating a level by only using towers.

The going can be rough early on. Some of the character classes are woefully underequipped to handle low level play (the Monk doesn't even start out with a damage dealing tower or trap!) and even if the player chooses a class that's decent from the start (like the Squire) early levels aren't very entertaining due to a lack of options and low maximum mana, necessitating the need to make repeated trips between gathering mana crystals and placing traps and towers.

The single player mode can be horribly tedious—the game has obviously been designed for multiplayer. The build phase requires too much time to run around collecting mana/treasure and setting up defenses on the large maps. Players can switch between characters during the build phase (if building up XP for them separately isn't a concern) but that requires even more running around since mana doesn't carry over between characters, and characters can only be switched at the point the player is trying to defend. 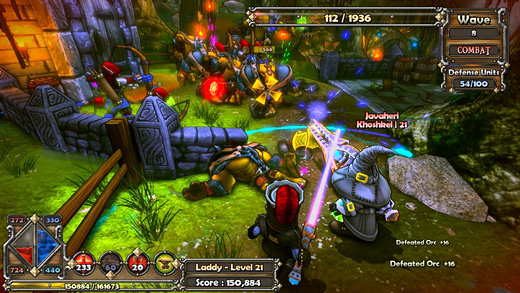 The multiplayer mode has its own share of problems. Beyond the general issues inherent with most multiplayer RPGs, the game has strong potential for griefing because any player can sell any other player's tower and gain mana from it. Since players gain XP and points based on how well they and their towers perform, this means that not only can other players destroy another's hard work with ease, but they even get rewarded for doing so! Players had better hope they have a group of close, gentlemanly friends to play with.

Dungeon Defenders also has a number of other flaws that annoyed me. I never liked any of the camera options, and the camera is even worse when trying to place towers. There's no mini-map or compass, so I constantly needed to open the full map to see what was happening and where I should be going—especially annoying when playing split-screen multiplayer since the map fills the entire screen, not just my own portion.

There are only 4 hotkey slots—woefully inadequate when each character has several towers, upgrade, repair, heal, and special attacks to use. The final wave of each map is drastically harder than the previous ones, so there'd often be maps where I snoozed my way through only to get devastated by the final wave and have to start over from the beginning. There's no bestiary to study enemies, it's more difficult to pick up items than it should be (players must be standing in just the right place) and there's a delay to see the item's stats and how they compare to existing stats.

Furthermore, unlike most tower defense games, it seems that some enemies immune to certain attack types will randomly spawn, making it difficult to plan things out. Melee combat is dreadfully simple (mash on the attack button) and ranged combat is frustratingly random (there's no reliable way to choose who to aim at). Once a level is completed, the only option is to go to the next level—there's no choice to go back to the tavern without starting the next level and quitting. So on, and so on, and so on. Taken individually, these annoyances aren't necessarily dealbreakers, but with so many of them, my enjoyment of the game was significantly hampered.

However, Dungeon Defenders isn't all bad. Once past the rocky start, making characters more and more powerful can be quite entertaining. Not only can stats be fully customized, but individual pieces of equipment can be permanently upgraded in a similar fashion by pumping mana into them. With several slots for equipment as well as a pet slot (which attacks and also gives massive boosts to character stats) there's a lot to enjoy for the person who likes to chase ever-increasing numbers. I especially liked how a could piece of equipment could be "locked in" at the store for purchase later—that's a feature I'd love to see in all RPGs with randomized loot.

Though the core idea is great, too many things bugged me while playing Dungeon Defenders

. Others may not be quite as picky, but as a tower defense game I feel it fails. As a hack & slash loot-based RPG with a few tower defense elements, it's not bad. If players with a close group of friends are looking for a variant on Diablo or Torchlight, go ahead and add a point to the score since the multiplayer can be good times (but not with randoms) and the loot and leveling are well done. For those planning to stay single player, drop a point from the score since Dungeon Defenders just isn't designed for it. Rating: 6.0 out of 10.

Parents: According to the ESRB, this game contains alcohol references, animated blood, and fantasy violence. The player's base of operations is a tavern but the most objectionable thing in the game is the Huntress's behind. Both the violence and language are very tame.

Deaf & Hard of Hearing: Not a problem. The story is told via text (with a voice over reading as well) and all gameplay cues are visual or text-based.

I completely agree This review sums up all the issues I had with the game concisely, but despite all of that, I still rather enjoyed it. As I had put 20+ hours into the multiplayer mode and completed the game, I can attest that it does not get any better as you progress. Maps of the latter levels are even more confusing and you’d eventually need to protect more than one crystals (which is this game’s equivalent of the base/tower). Since I played the game on PC, I didn’t have as many problems with the hotkey slots as you did,… Read more »