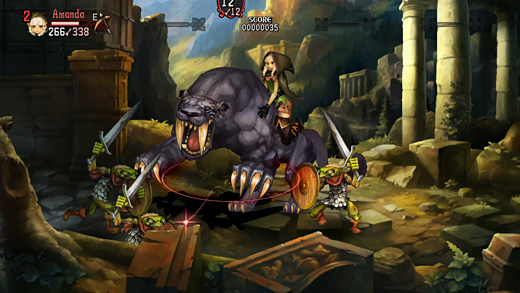 HIGH So. Many. Renaissance. Painting. References!!

LOW Being able to touch NPCs with a hand cursor (and elicit reactions) during certain story scenes.

WTF Mermaid butt. Think about it.

A true homage acknowledges its predecessors while still finding ways to differentiate from and improve upon an established formula. An even better game, however, strives to break away from convention by adding its own unique twist, maintaining a delicate balance between the classic and the new. Dragon's Crown

is such a game—not only does it firmly plant itself amongst the leagues of beat-'em-ups that once ruled arcades, it also adds a dash of role-playing game (RPG) and some modern conveniences. Altogether, it's one of the most innovative entries into the genre in years.

That said, unlike Brad, who found it difficult to find fault with the game, I couldn't help but notice some niggling issues that detracted from the overall experience, albeit minimally.

Before getting to any concerns, it must be said that the most striking thing about Dragon's Crown is the luscious, detailed aesthetics. Each and every screenshot looks like its own work of art, and it's hard to believe the game looks as good as it does until actually seen in motion. Unfortunately, the Vita version does experience the occasional bit of slowdown during more chaotic segments of gameplay, but those who remember Odin Sphere can breathe a sigh of relief—it's nowhere near that bad. In-game visual references that span classic Disney to religious imagery and Renaissance paintings to Western fantasy and classic games are the icing on Dragon's Crown's gorgeous cake.

Still, there is one major trend in the game's art direction that I can't overlook—the characters are exaggerated caricatures of common fantasy fixtures, but for every pinheaded macho man, there're five open-mouthed, half-naked women, and I will be the first to admit that it gets tiresome quickly.

With all the heated controversy surrounding the game, I feel it necessary to qualify that statement by saying that George Kamitani is an immensely talented artist, and I'm not asserting that there's anything wrong with the sexualized aspects of Dragon Crown's art style or people who enjoy it. The game is clearly inspired by high fantasy of the 80s and games such as Golden Axe and Dungeons & Dragons (which Kamitani himself worked on), both aesthetically and gameplay-wise, and I firmly believe that Dragon's Crown is an expertly-crafted homage that may even be using its exaggerated designs to poke fun at the fantasy tropes it utilizes. However, I cannot in good conscience give a critical analysis of the game without at least acknowledging my discomfort with its depiction of women. High fantasy T&A may be a selling point for some, but it isn't for me.

The art isn't the only sexy thing about Dragon's Crown, however. The real meat of the game lies in its easy-to-learn, addictive gameplay. Executing combos and special attacks with three other characters on the screen is often chaotic (as a good beat-'em-up should be) but it's satisfying mayhem that's a joy to behold, although I did often feel that the action was so out of control that I wasn't really a part of it. 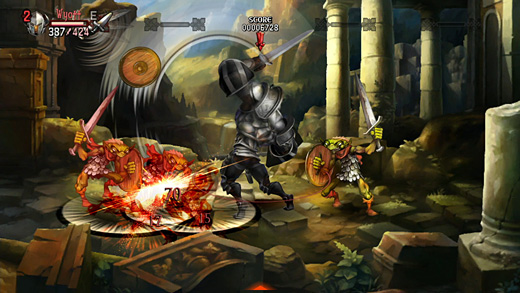 I began the game with the somewhat blasé Fighter, who turned out to be surprisingly competent at juggling enemies in the air despite his unbearably heavy-looking armor. While he doesn't exactly take much finesse to use, it's extremely satisfying to pound one's way through enemies with little regard to what's hitting what.

In fact, all of the heavy-hitting characters are unbelievably nimble on the battlefield, making gameplay fast-paced and exciting, no matter what character players choose. The downside to this is that it's very easy to get into a state of frantic button mashing when enemy numbers ramp up, making my thoughtfully-chosen equipment and skills feel like they had little impact on how I fared during the first few hours of the game.

After the game's nine main stages are unlocked is when things truly open up and the difficulty ramps up to the point where mere button mashing won't get one very far unless accompanied by some skilled friends. Luckily, it's possible to enlist fighters whose bones have been salvaged from the dungeons and reanimated for a paltry fee. These AI partners aren't all that bright, however, and they never level up, meaning that they'll be used for a level or two before being swapped out for more powerful reanimated AI puppets. A bit creepy, no?

I also had a bit of an issue with the way the game locks multiplayer away for the first few hours. While I understand the choice to force players to experience the game to get the hang of things before the option opens up, it's frustrating to not be able to immediately start off with friends in a game that screams "multiplayer fun!" It's also worth noting Dragon's Crown's time limit on levels makes it particularly difficult to coordinate a successful run with random partners because it's difficult to communicate with them and tell them to haul ass.

Finally, I should mention that like all Vanillaware titles, Dragon's Crown suffers from an unfortunate case of recycle-itis.

As mentioned previously, there are nine distinct levels in the game, and after multiplayer becomes available, players are forced to go back and revisit those same levels over and over again. Considering the amount of replayability the game has, it's a shame that the gorgeous and unique levels have to become old hat so quickly. While switching up characters offers enough changes to keep things fresh, even then, the game forces players back to the beginning of the narrative when a new character campaign is selected.

This all may sound overly negative considering the deep praise given by Brad, but I think it's important to highlight Dragon's Crown's few flaws, even if they are slight.

Still, I put 15 hours into this in-your-face sexy side-scroller and would happily go back for more, which is saying something coming from someone who has no nostalgia for the era Dragon's Crown

honors. Vanillaware has finally reached a level of substance to match their striking visuals, making Dragon's Crown by far the most accessible game in their catalogue, and that's definitely something worth high praise. Rating: 8.0 out of 10.

Disclosures: The game was obtained via publisher and reviewed on the Vita. Approximately 15 hours of play was devoted to the single-player mode across two characters, and the game was not completed. One hour was spent on multiplayer.