The First (But Not Only) Rule of Survival 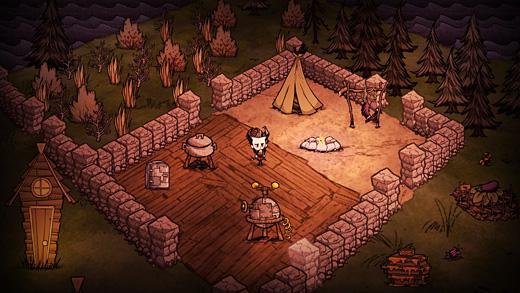 HIGH Exploring a dangerous world, learning its mysteries, and succeeding where you've failed before.

LOW Dying and restarting a life that was going so well only moments ago.

WTF Purple tentacles grow from the ground and smack you in the face.

These components, perhaps not in this particular order, are the rules of the day in Klei Entertainment's Don't Starve

—a self-published project the studio describes as a wilderness survival and systems exploration game.

See? It's not always about eating.

Surviving while lost in the wilderness with nothing but one's wits and nature's gifts to live off of is no easy task, and Don't Starve conveys that difficulty with a myriad of ways to meet one's demise. Along with starvation, as the title suggests, insanity, hypothermia, food poisoning, tribal warfare, and winding up on some other creature's dinner plate can all spell doom.

Death is permanent here, meaning it's back to square one—no tools, no treasures, no pig-man allies—when this happens. To stave off such threats, players must first gather resources like sticks, logs, stones, and grass, then craft the essential tools to make this virtual life in the bush more livable.

From a simple axe and shovel, to a "science machine" and "alchemy engine" that grant the ability to create more complex items and structures, the path to a remotely civilized existence is long, but rewarding. There are also magical items to discover, like the resurrection amulet and the elemental magic rods, as well as other mysteries to explore, including ghosts, phantoms of the night, and unexplained objects scattered throughout the world.

The influences of dark fairy tales and Burton-esque fiction in Don't Starve are clearly evident. German expressionism, also an inspiration for Tim Burton, is most evident in the heavy, sketchy lines in the game's dark, pen-drawn art style, which is beautiful in its simplicity, especially in motion. 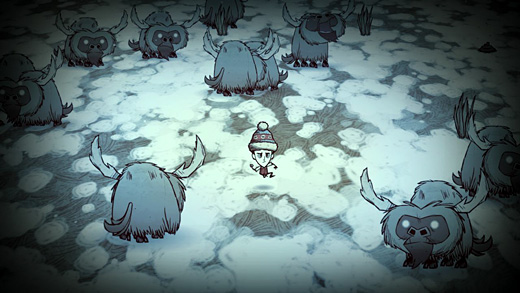 Playing Don't Starve can be stressful or meditative, depending on one's approach. Running around and flooding the limited inventory space without clear goals in mind can leave a player unprepared when hunger, winter, or a wild monster-dog strikes. Methodically tending to one's basic needs by setting up defensible camp walls near renewable resources, and planning ahead with farm plots and means for food-preservation will provide a safe foundation upon which to base exploration.

This isn't to say that there is a definitive "right way" to play Don't Starve. On the contrary, much of the game's beauty is in its openness to player experimentation. Similar to many Roguelike games, a failed run in Don't Starve equates to increased knowledge and perhaps new ideas about what constitutes successful strategy. Each attempt also nets experience points that add up to new playable characters with different quirks and characteristics, as well. Fancy playing as a robot that can eat spoiled food, or a little girl with the power to spontaneously ignite a magical flame? Don't Starve can and will deliver.

Even after many characters' lives have run their courses over many in-game days, there will still be plenty to learn about and toy with. As was the case during an extensive pre-release open-beta period, Klei continues to add to the game with post-launch updates and other enhancements. Future updates will continue to expand the experience at least until the end of June 2013.

Important components of modern gaming are the personal and shared narratives that accompany play. While Don't Starve authors very little, if any, story for its audience to consume, adventures in the game's world yield sentimental tales that define the experience and keep players returning to create new stories. I'll never forget the time a freak lightning bolt burned down my entire farm, or the day a tree stood up and chased me clear across the map… until I planted a pine cone within its line of sight. The game also includes an objective-based adventure mode, but players will have to explore the standard survival mode thoroughly in order to access it.

is all but alone in the landscape of wilderness survival games; the closest and most notable analog is the wildly popular Minecraft. Don't Starve, however, adds greater depth and consequence to its world than its blocky counterpart does. The game's realistic rules of logic infused with pseudo-scientific magic and occult tones also make the world more engaging. Although it's possible to hit a wall in terms of progress, the exploration, discovery, and stories that go hand-in-hand with the experience will be enjoyable, rewarding, and long-lasting for gamers who seek to invest in their virtual enterprises. Rating: 8.0 out of 10.


Disclosures: This game was obtained via publisher and reviewed on the PC (Steam). Approximately 20 hours of play were devoted to the single-player mode, and the game does not have a definitive ending. There are no multiplayer modes.

Parents: The ESRB has not rated this game.

Deaf & Hard of Hearing Gamers: All dialogue is text-based. There is no closed-caption equivalent for other game audio (environment and monsters).