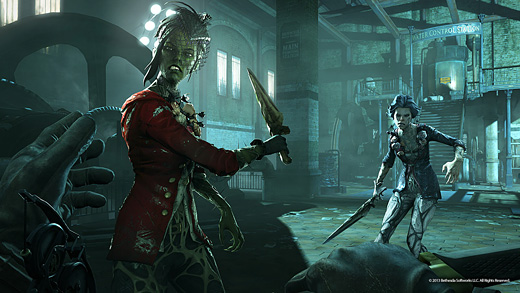 The most important thing to know about Dishonored's newest add-on, The Brigmore Witches

, is that it's just more Dishonored. Depending on a player's feelings toward it, that's either a good or bad thing.

The Brigmore Witches picks up shortly after the previous downloadable content (DLC), The Knife of Dunwall, ends. I won't spoil anything, but the player is still in the shoes of Daud, the enemy assassin from Dishonored's main campaign, and he's in search of a witch named Delilah. This DLC features a brief prologue chapter followed by three main missions, and wraps up Daud's story at the end.

Compared to Knife of Dunwall, Brigmore Witches is underwhelming. Technically it's on par win every way—it's about as long, about as difficult, and about as interesting. This parity is exactly why it isn't impressive. It's too safe, and doesn't stray from the Dishonored formula.

On the other hand, just because something's not impressive doesn't mean it's not enjoyable. The Brigmore Witches brings absolutely nothing new to Dishonored, but as a fan of the game, I was content to get more of what I liked—all its fast teleporting, sneaking and killing thrills are still welcome, despite no variation. It's also worth noting that some of the levels are in the Brigmore Witches are impressively large. One area has several sections filled with city blocks and buildings with multiple floors to explore. Arkane definitely didn't skimp on girth for this last DLC pack.

Unfortunately, while the gameplay is still solid, the script was not. Daud is an interesting character (as is the Outsider, who pops up here and there) but I often asked myself what the story was trying to say. Honestly, I don't know. Daud's adventures don't have much to do with the main campaign, but the play was still solid enough to keep me engaged until the end.

is a textbook case of more-of-the-same, and offers nothing that hasn't been seen before. Because I liked Dishonored proper, I enjoyed both of Daud's DLC episodes, and they were released far enough apart from each other to prevent me from being burned out on its first-person stealth formula, and there's not much more to say—It's just more Dishonored. That's it. Rating: 8.0 out of 10.


Disclosures: This game was obtained via publisher and was reviewed on the Xbox 360. Approximately 10 hours of gameplay were devoted to the single-player add-on, and it was completed twice. There are no multiplayer additions.

Parents: According to the ESRB this game contains blood and gore, intense violence, sexual themes and strong language. Depending on how the player approaches the game, a drop of blood might not be spilled, but the possibility exists. It's best to keep this game to mature players.

Deaf & Hard of Hearing: Subtitles are available and visual cues are present for when enemies are alerted to the player's presence. The game might be more difficult to play for hard of hearing individuals since some enemy locations are telegraphed by sound, but it's certainly not impossible.