The Aesthetics of Ruthlessness 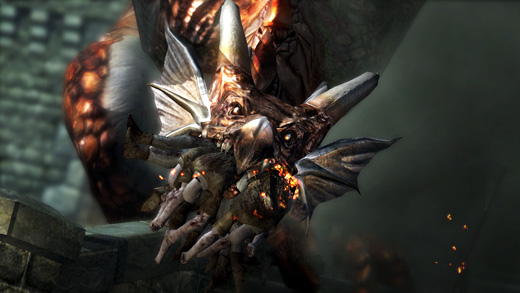 WTF Dead enemies getting stuck to the player's shoe?

Demon's Souls is the Gravity's Rainbow of video gaming: a big, esoteric monster whose infamy seems fueled mostly by its own infamy. To wit: People are talking about how much other people are talking about how hard this game is. And make no mistake, the game is brutal. It thrives on your death; it is not a game where the player enters an avatar and fights some scurrilous, pre-ordained enemy. The player is not fighting demons, she is fighting the game itself—the developers' very mercilessness. The player will die, ignominiously and repeatedly. She will despair.

After all, to extend the metaphor, one does not read Gravity's Rainbow, one conquers it absolutely. One brags about it, carries around a dog-eared copy, underlined and tamed. Demon's Souls demands the same devotion and nothing less. That I and so many other critics can only seem to talk about the game's difficulty is correct. We are not critics without insight: there is one thing to write about, and it is this blank, unfeeling impenetrability. It spikes in unexpected ways and times, jarring the player ever out of sync. Both at its core and through to its very exterior, Demon's Souls is an intentionally terrifying exploration of video game difficulty. Its conclusions point to a fundamental reevaluation of what our entertainment should be.

But first, that remarkable exterior. The game's pitch-black art direction carries with it exactly zero in the way of levity. This is black-metal bleak, its only safe spot a surreal, purgatorial cathedral called the Nexus housing a few NPCs whose demeanors range from mournful to nasty. Here you level up, fortify weapons, and listen to the dire maunderings of the upperworld's scavengers. The levels themselves—five, ostensibly, but with wildly varying sub-levels—are arch dark fantasy, finding new inspiration in tired castles and dungeons by richly detailing their rubble and ash chars, by relishing the darkness of the hallways and the greyness of their skies. This is the deep, macabre darkness of Francis Bacon, Burzum and David Lynch, using the leash of fantasy to constrain its imagination. But it works, writhing within its genre. A decaying pope sits atop a mountain of upturned chairs. Titanic intestines hang, suspended by iron chains. Lunging warrior skeletons carry no cartoonish ancestry—meat clumps to their bones, and they feel once-human. 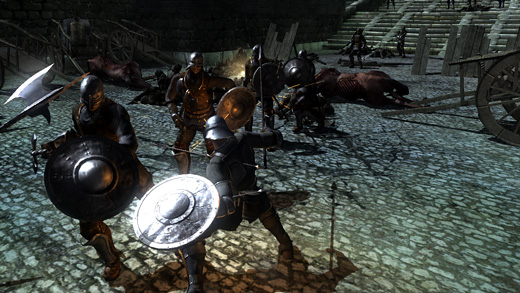 The game reeks of death. It is most abrasive in its intentions in its opening hours, wherein the player will die hundreds of times, figuring the game out death-by-death. Each inch gained is rewarded by a new frustration. It is rare to the point of unprecedented that a modern video game would play hard-to-get with its user, that it would beguile through disinterest, but that is exactly what Demon's Souls does in its three-hour tutorial-by-fire. It is fantastic looking, intuitively controlled, and it does not care for you one iota. Go ahead, it says in its opening hours. Don't play me.

Perhaps most brilliantly, it makes note that its world would continue on without you. Even the game's online components are a graceful addendum to its difficulty. Other players on the server can leave elliptical hints scattered throughout the gameworld, and their ghostly white phantoms skirt through the field of vision, dashing onward. They make no difference in your world, but their deaths do leave a bloodsplatter within it. These are intended as warnings, there to show you how to play better. But they also function as cheeky reminder and as belt-tightening encouragement. Everyone else is dying, too, they seem to say. Press on.

Because after those maddening first few hours, the gameplay's architecture is revealed to be as elegant and time-honored as the tropes of castles and caves used in the art design. This is a loot game driven to its barest essence. Here there is only one loot, one impetus, one universal currency: the titular demon's souls, gained from each enemy defeated. The combat, too, is straightforward, a game of sharp reflexes and parries and of patterns slowly recognized and adapted to different geographies. The player grasps, eventually, that there is order to the brutality, that you actually can grind, reassuringly, you can level up and come back to the same foes and find that, after all, your dodges are swift enough, and your sword can in fact cleave a once-impossible path. Grinding has long been a JRPG crutch to stretch gameplay past the crucial 50-hour mark. The gamer comes to regard it here as a breath of fresh air.

And then, with a grimace, the difficulty spikes again, and the game stretches impossibly forward. The player stares once again forlornly at those white phantoms falling to their deaths. The game's obstinacy is brilliant and its brilliance is obstinate. It is a convenience of fate that a game so diametrically opposite to this was released with fanfare concurrently, because the triumphs of this game and of Uncharted 2 are directly inverted. Naughty Dog's blockbuster grabs the player's hand and ushers them through a funhouse, with generous respawns and "show me how" buttons. The player yearns only to keep the scenery coming. But for all its storytelling bravado, the player never truly cares about that game's smirking bro and his mutant Rasputin nemesis. The controller rests on the player's lap during cut-scenes, while he takes a sip of beer and waits for the next explosion or vista. In Demon's Souls, when the game deigns to wrest control from the player—a liberty it doesn't even take during the pause screen—the player grips the controller tighter, braced, vividly within the space of his too-weakly armored character and utterly alive at the possibility of a brand new defeat. And he will despair of the certainty with which he will be hacking once again to this point to try and fail again, try and fail again, all his effort just a bloodspatter in another player's quest. Rating: 9.0 out of 10.

This game was so good, haha. I love the idea of death as forewarning. You capture the appeal elegantly and coherently.

After reading this I want to go home and play it again.

“all his effort just a bloodspatter in another player’s quest.”

A very good review that captures the feelings one has when playing this game.