This Merc's Mouth Is His Best Feature 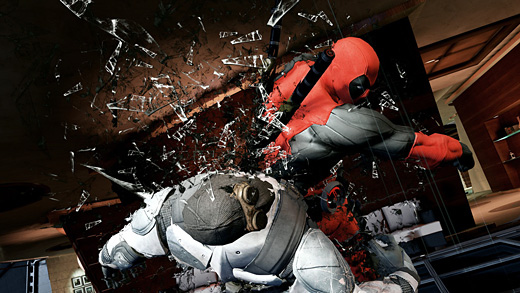 HIGH This is the funniest Deadpool story Daniel Way's ever written.

WTF "And if any of you nerds are puffy about Rogue being able to fly in this game when she can't fly in the comics right now, take a bath, move out of your parents' basement and maybe you'll get to kiss a REAL girl." Hey game, you know what? F**********ck you.

I'm what you might call "an enthusiast" when it comes to Rob Liefeld and Fabian Nicieza's comics creation, Deadpool.

comics has signatures from folks like Nicieza, Joe Kelly, Gail Simone, Jimmy Palmiotti, Buddy Scalera, Frank Tieri, Daniel Way, Alvin Lee, Jim Calafiore, and other people whose names you wouldn't know unless you were one of "those" fans, and when it comes to Deadpool, I am definitely one of  those fans.

However, I lowered my expectations for High Moon's crack at Deadpool. Although Way was involved, his 65-issue run on the title was oftentimes sloppy and repetitive, despite having an excellent arc its first year. Way introduced a dueling caption boxes device (one's a rational voice inside Deadpool's head, the other not so much) in lieu of a supporting cast, which was something that stopped being funny real quick. The mercenary searching for redemption was replaced by a goofy clown.

To be fair, it's not that Way's portrayal was necessarily out of character or wrong, just that he had very little to say with it, and it was difficult to invest in. Way recently said of Deadpool "I could almost write it in my sleep." Dude, you aren't the only one that came to that conclusion. Of course, with my luck, Way's run also accompanied the most commercially successful period in the character's history, so it makes total sense that High Moon Studios would go to him for the project.

So with all this taken into account, I was surprised (and pleased!) to discover that Way and the writers High Moon supported him with have crafted an entertaining story that had me in stitches.

Wade Wilson, the merc with the mouth, is hired to kidnap a media mogul. Before he can nail the guy, perennial X-Baddie Mr. Sinister kills him, because he doesn't need him any more for his plot to use the energy of the destroyed mutant colony of  Genosha to… well, I'm not really sure, since Deadpool can't be bothered to focus on the game's plot. Whenever a character attempts to explain it to him, we never learn what the plan is. Deadpool just wants to hurt Sinister bad for messing up a payday. 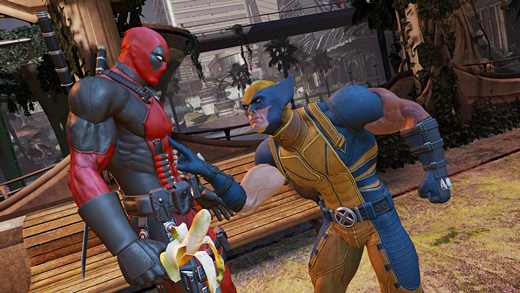 The opening sequence invites players to clomp around Deadpool's apartment discovering things only the fanniest of fanboys were ever meant to know. Afterwards, the writers start with nonstop in-jokes and break the fourth wall without reservation, coming to the edge of being obnoxious without quite tipping over. The game just never stops throwing ridiculous stuff in, and High Moon doesn't shy away from attacking video games, either—things go goofy 8-bit style whenever Deadpool forces the game to go over budget.

It's also worth noting that players who love Nolan North will be in hog heaven. North clearly relishes this character, possibly more than Nathan Drake, and even the canned quips Deadpool spouts during the action manage to elicit a smile after the hundredth time. With North speaking his lines, Way's take on Deadpool finally comes to life in a way that it never did on the printed page, and hearing the captions (as opposed to just reading them) changes a lot.

As a fan, I'd say that Deadpool achieves a balance between fanservice and a story that's actually good. I'd almost say that fans of the character would do well to check it out… except then they'd actually have to play it. I really wish I could say I enjoyed playing Deadpool as much as I did watching it, but I didn't.

Gameplay starts off well enough. There's a classic weak/strong melee combo system that incorporates a dodge using Deadpool's teleportation device. Players pound X and Y for weak and strong attacks, then pound on the right trigger to fire his gun. This is all solid, but the problems begin when gunplay is implemented. When firing, the game switches to an over-the-shoulder view, requiring players to tap the right trigger to get the crosshair to appear, and then to tap again to actually shoot.

As the game goes on, more and more waves of bad guys attack Deadpool up close and far away at the same time, and this delay between stabbing and shooting becomes lethal. The game makes up for this with a "gunkata" move that merges with the dodge, but even that can become difficult to use in frenetic sections. The more claustrophobic and challenging the game becomes, the more broken it feels, and battles seem to be won more by luck than any kind of skill.

Somewhere around the middle of the campaign, the environments get duller, the enemies get samey, and the creativity is limited to the cut-scenes and the writing. At this point, Deadpool could pass for any number of tired third-person shooters set in endless piles of rubble. Adding insult to injury, the last section is an endless arena battle against clones of previous bosses, and ends so abruptly that High Moon must have gotten a letter from the publisher telling them to wrap it up because it's gotta ship.

High Moon obviously had love and care for the character, and they deserve credit for helping Way refine his vision into something that's actually funny, but Deadpool

just doesn't play well and feels like a chore by the end. Deadpool may be a crazy lunatic on the surface, but the trick to the character is that there's something of substance underneath all the snark and jokes. Here's hoping High Moon or another developer somewhere down the line can craft some gameplay that's as good as the writing. Rating: 6.5 out of 10.

Disclosures: This game was obtained via retail purchase and reviewed on the Xbox 360. Approximately eight hours of play were devoted to the single player mode, and the game was completed. There are no multiplayer modes.

Parents: According to the ESRB, the game contains blood and gore, intense violence, mature humor, sexual content, strong language. The game is pretty dang violent, with a lot of F-bombs and extremely juvenile humor. Maybe steer the kiddies away from this one.

Deaf and Hard of Hearing: Standard captions are provided for the dialogue, though it must be said a good deal of the game's appeal comes from experiencing the performances. Without the ability to hear them, expect a lackluster experience.