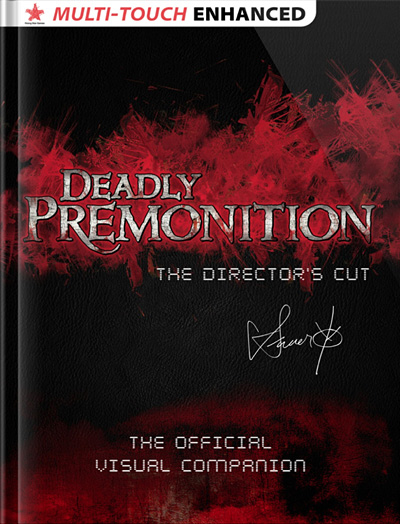 I'm certain there's a great story to be told about the troubled six-year development of Deadly Premonition, and I'm even more certain that this interactive guide isn't the place to find it. It does, however, offer a degree of insight into the mindset of the man behind its madness, Hidetaka "Swery" Suehiro, and in places is every bit as esoteric as the game itself.

Take, for example, the "Welcome to Greenvale" chapter, the first after a brief preface from Swery himself. First, readers will see a blurry, discoloured photograph of the entrance to the town, followed by a map, with key locations highlighted with icons depicting a zombie's hand emerging from a cup of coffee holding a seed. Tap on the first of these and you'll be treated to a loop of the game's instantly familiar acoustic theme, "Life Is Beautiful." Select the others and you'll get a picture of the lake, an audio clip of the Sinner's Sandwich scene, a very brief description of York's arrival in Greenvale, and two very brief and aggressively edited clips that play up the game's horror elements. Weird and entirely inconsistent, it's Deadly Premonition to a T.

Elsewhere, it's a little more conventional. There are biographies of each of the key characters (along with optional spoiler sections for those who've finished the game), while one section offers an interactive map, with descriptions and locations for all of those hard-to-find trading cards. Concept art reveals some character concepts—there's an alternative York with lighter hair and a more prominent scar—while the location design documents are an interesting visual showcase for Greenvale's most prominent buildings, including photos of the real world locations that inspired them. 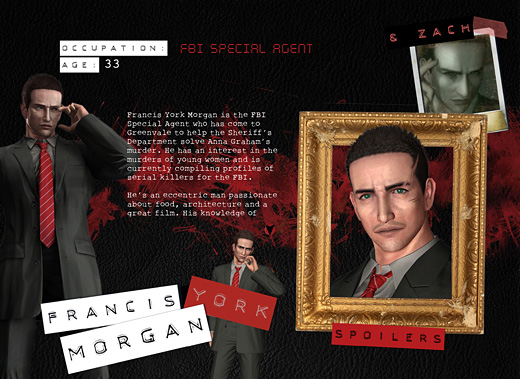 The later stages of this iBook are reserved for a gallery of some impressive fan art, a pair of trailers for the Director's Cut, and a suite of games, including a tricky multiple-choice quiz, perhaps the easiest word search ever compiled (all but two of the words appear horizontally in the grid), a brief and bizarre maze game, and an interactive diorama which allows you to place and scale character models against a Greenvale backdrop. There's even a soundboard, which, in typical Deadly Premonition style, doesn't highlight Francis York Morgan's most memorable quotes, but instead plays out entire dialogue sequences, some of which are over a minute long.

The most interesting chapter, and simultaneously the most frustrating, is the Inside Access section. Here you'll find an annoyingly brief bio of Swery himself, alongside a clutch of storyboards. These give a little insight into his creative process—there's a glimpse of the game's title sequence, drawn by the director himself, and a longer, albeit sketchy, take on the late-game encounter with Forrest Kaysen. But there are no annotations that let us know what's written in the Japanese characters alongside the pictures.

The same goes for Swery's notebooks, with potentially fascinating plans and ideas hidden behind a wall of kanji. Yet the words are accompanied by doodles, diagrams, maps and flow charts, and through the drawings in particular you begin to get a sense of a vision coming into sharper focus. There are pictures and poses here that fans will recognize from the game (including a sketch of the second murder scene) and, strangest of all, a page of English words covering every letter of the alphabet, with a large "PEACE" in red ink in the centre. It's oddly fitting that the next sheet should be a drawing of cherry pie and ice cream.

In many respects, it's the perfect companion to the game—sometimes baffling, sometimes frustrating, and sometimes enlightening, a guide as enigmatic as the game and the man whose brainchild it was. It's perhaps best summed up by the brief clip of Swery driving by Snoqualmie Falls in Washington, the original inspiration for Deadly Premonition, as he cheerfully whistles the refrain from "Life Is Beautiful." Naturally, he's slightly off-key. Rating: 6.5 out of 10.


Disclaimer: This content is only available on iPad, and was reviewed on an iPad Mini.

Sigh. I hope this is a free download. I don’t own any kind of “i” pad, tablet, whatever, but if I did, I’d be mighty cheesed to have paid for both (a) the Xbox version of DP (which is awesome), and (b) the PS3 version (since I gave my Xbox to my nephew and loved the game dearly, though now, not so much) and they pay for THIS. SWERY’s really milking this cow, with diminishing returns on its charm.