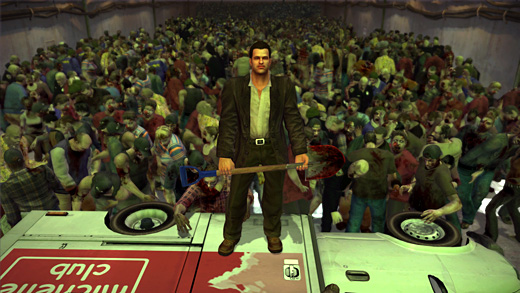 So what exactly is a zombie anyway? A good starting point might be a little historical and etymological context on the species. The word zombie derives from the West-African Nzumbi, an evil spirit and popular character in a rich mythology. The zombie's roots are tied to Voodoo: a Haitian religion which is basically a free-form amalgam of Catholicism and various African beliefs based on the realm of spirits. In its original form, a zombie is a person revived by a priest to serve him. He is an empty shell with neither a soul nor a will of his own. His only purpose lies in fulfilling the tasks that his master gives him. Obviously, a myth which is heavily influenced by the experience of slavery.

The modern zombie as we know him is flesh-eating, aggressive and contagious; part of a larger mob, haunting farmlands, small towns and abandoned warehouses. This version wasn't in existence until George Romero created him in his 1968 classic Night of the Living Dead. With an army of dead persons marching towards a certain apocalypse, every loss for the poor surviving humans means one more combatant in the ranks of the smelly stumblers. A truly vicious strategy for conquest. Besides the aforementioned habitats, the zombie feels at home in large shopping malls, a phenomenon first established by Romero's next part of his Dead-quadrilogy, Dawn of the Dead. It is here that the zombie becomes the ultimate metaphor for consumerism. A mob of indifferent, insatiable buyers/feeders. An ugly image, but not necessarily too far off target.

The shopping mall and its metaphor get us directly to the zombies in Keiji Inafune's Dead Rising. Developed and published by Capcom, the game lets the player take the part of Frank West, a big-mouthed reporter on the lookout for the next big story. His search leads him to the small town of Willamette, right in the middle of a zombie infested shopping mall. Over the course of the game, Frank's main objective is to survive the next 72 hours and solve the mystery. Besides that, he can engage in a large variety of side-quests like saving survivors or killing people who snapped at the sight of the living dead. (Which, by the way, accords to a meme which governs most casualties in modern zombie movies to result from irrational or incompetent behaviour on part of the humans and not from a direct influence by the undead.) 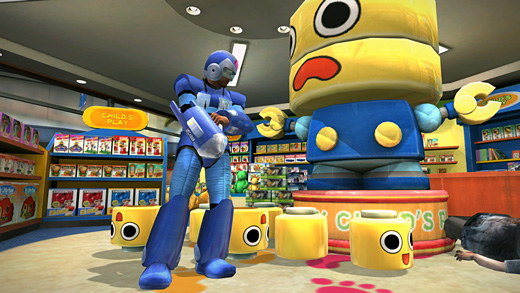 So what are the zombies like? Well, first of all they're slow. But what they lack in speed they make up for in number. It is truly a next-gen quality of Dead Rising to render such a large amount of creatures on-screen and an essential part of its gameplay mechanic. Due to the vastness of the mall, such slow enemies would not pose a threat if there weren't literally hundreds of hungry, rotten undead waiting for the player to make the big mistake of maneuvering himself into a too-crowded place. Dead Rising draws a lot of its tension and creepiness from this layout. While the zombies are quite dumb and Frank has a variety of every-day items to defeat them (ranging from things like chainsaws, toy light sabers, giant stuffed teddy-bears to pre-heated frying pans), things get nasty very fast if he is outnumbered in a tight spot.

Frank gets information on the sidequests I mentioned via the obnoxious janitor Otis, who has the terrible habit of calling in on his walkie talkie at the worst times possible. In general, timing (or the lack of it), is a very crucial element of Dead Rising's game-play mechanic. While the layout of the mall invites the player to experiment and explore, his mission schedule doesn't. Handling multiple main- and side-quests simultaneously while making sure to not run out of health items and weapons demands a great deal of decision making and clever prioritizing on part of the player. So, while I was aware of the potential fun to be had here and there, I was usually far too busy to actually play around a little. Dead Rising is far less open-ended and free then it appears to be at a quick glance. But that is not necessarily a bad thing. What the game-play lacks in freedom it makes up for in tension and the rewarding feeling of excitement when a plan calculated down to the last minute really turns out to work.

The only problem is that the living are as dumb as the dead. Time and time again the very limited AI the undead sport grabs a hold of the survivors Frank must accompany to a save place as well. As if the task of guiding a handful of people barely capable of defending themselves through a sea of zombies by itself weren't tedious enough. Taking into equation that large parts of the game have the player running against the clock, the inferior AI can be one of Dead Rising's biggest sources of frustration. My survivors repeatedly got either eaten or left behind due to their weak pathfinding or their inability to decide which of them should walk first though the doorway I just cleared. 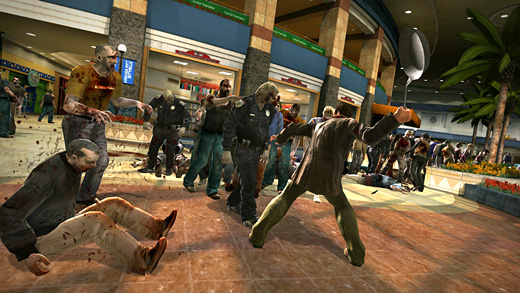 Another actually not-so-small drawback is the save system Capcom got so ferociously attacked for by gamers. Dead Rising grants its players one save and one save only per game. Furthermore Frank must save at one of the rather scarce savepoints. This can lead to great frustration. For example, a save that in retrospect turns out to not leave enough time to finish the next storyline plot point can force players to restart their game all over. And while Dead Rising emphasises multiple runs through it, such a strict policy is not exactly what one would call player-friendly. At least the system keeps track of Frank's status and level, so that it is possible to start all over with already enhanced stats and useful items in the inventory. But while it's nice to restart with a more powerful version of Frank voluntarily or after finishing the game, it's a small consolation if the game practically forces you to start from scratch.

But as much as Capcom screwed up on the save system, they nailed another aspect perfectly well, dare I say almost brillantly. Achievements are handled exactly like they should be. There are 50 of them, each giving you 20 gamer points, no matter if you played through the game or just knocked over ten zombies with a bowling ball. This way, a look at a friend's Dead Rising sheet not only reveals how professional a gamer he is, but also how he approached the game. Did he fool around at first and try zany stuff like putting novelty masks on zombies, or did he go straight for the ending? Capcom prooves that achievement points can be more than a mere status symbol, and a fun way of keeping track of your game time, almost like a diary describing Frank's digital adventures.

With Dead Rising, Inafune enhances his reputation as one of the most talented game producers currently working and Capcom strengthens its standing as a leading developer of strong original titles. Except for the mentioned flaws it is spot on design-wise and and the enjoyable zombie theme and a tasteful art direction accompanied by a good soundtrack ranging from creepy keyboard-tunes to spot on wishy-washy mall muzak helps to propel a great atmosphere, which is just satirical enough to avoid taking itself too seriously. The zombies themselves are presented like they should be: slow, dumb, many and a spot on metaphor for the vagrant consumerism of the western hemisphere. As far as the sentiments of modern zombies in Willamette and elsewhere are concerned, they can be happy that finally a video game was able to accurately depict their kin the way the great George Romero once imagined it. Rating is 8.0 out of 10.

According to ESRB, this game contains: Blood and Gore, Intense Violence, Language, Partial Nudity and Use of Alcohol

Parents, don't even think about it. The game features a special move called "disembowelment, suggestive themes and detailed animations of what happens when various tools are applied to living dead people.

Friends of the zombie, other horror hounds and fans of George Romero and/or Peter Jackson's early work will be very very happy with this game. Atmosphere, gore, soundtrack, story, everything comes together to offer you the zombie game you dreamt of since you first saw either Dawn of the Dead or Braindead. If you are not convinced yet, remember: The game features a special move called "disembowelment", suggestive themes and detailed animations of what happens when various tools are applied to living dead people.

Attention people not owning a 360 yet. I know those are big words, but Dead Rising is not the worst argument to purchase this console, especially with Lost Planet, Ianfune's next 360 exclusive title, announced for early 2007.

Deaf and Hard of Hearing players should be aware that Capcom is responsible for a major screwup concerning the games subtitles, which effectively prevented me from giving this game a better score. According to them they didn't test Dead Rising on SDTV's at all, resulting in almost unreadable subtitles containing very important information regarding side-quests and the main story on said standard definition televisions. If it eases your pain a little at least half the text is not accompanied by voice-acting, so basically we are all screwed. Personally I was able to get a picture I could at least play the game with, by buying a better cable than the one that came with the 360 by default. But still it is not very nice to make me buy something for an extra 20$ to be able to play a game which cost me 60$ to begin with. I seriously hope this is a one time incident. Otherwise Capcom might quickly lose its growing credibility.