Days of Futures Past 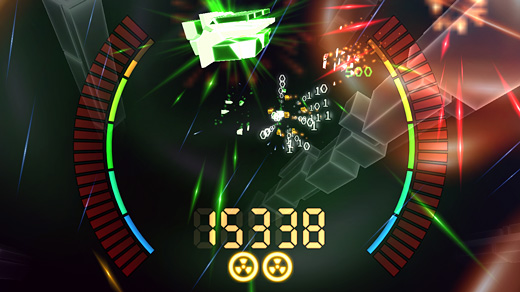 LOW Ineffective UI cues and the lack of hit recovery can sink the player in seconds flat.

WTF The game may not have an ESRB rating, but the random level content may inspire some rage that qualifies as "mature."

As I slide across the icy lanes of the bitstream, listening to the cold, synthetic hum of nearby data packets reverberate around me, it's clear that I'm racing through a memory.  Before social media and smartphones grew to prominence, our collective view of the internet took form as The Information Highway; a much more linear expanse of possibilities than the cloud of asynchronous transactions that hold our attention today. Gliding down this neon highway was the scruffy cyberpunk ideal—the Hacker, searching for code to crack and precious data to "liberate" to the highest bidder.

With its winding, digital thoroughfares and wireframe landscapes, long-time independent developers Digital Eel evoke those ghosts of cyberspace past with Data Jammers: FastForward, their latest self-published release for the PC.  This atavistic sensibility doesn't stop with the visuals—Data Jammers presents itself as an arcade-style score chase, complete with a simple premise and accessible controls, but does the game's simplicity lead to a satisfying experience?

Data Jammers' marketing materials describe it as "breakneck virtual racing," but the game actually steers much closer to Audiosurf (another indie PC favorite) than Wipeout.

Both Data Jammers and Audiosurf feature multi-lane traversals through a virtual world and pursuits of a higher leaderboard ranking, rather than the finish line. In addition, dynamic content creation also figures prominently in both games: Audiosurf summons its tracks from the potentially-endless library of music on a player's PC, while Data Jammers applies content randomization to a more confined set of fifteen levels, spread across three chapters. Those similarities end once the structure binding those levels is examined, however, as Data Jammers unites all of its content under a narrative conceit, albeit a simple one.

The player's mission is clear: traverse the bitstream and uncover the terrible secrets of Ouroboros, a hacker group who stands to threaten society as we know it.  It's a thin save-the-world premise, but Digital Eel deftly applies it with a light touch, sprinkling the theme across various aspects of the game (casting enemies as "rejection algorithms" that do damage through "packet loss") rather than bombarding the player with exposition.

The visuals also convey the theme effectively, carrying the player along twisting, undulating tunnels of virtual light, set upon a glorious landscape of luminescent geometry. These environments are more captivating in motion than in screenshots and it's a refreshing reminder that imaginative art direction can trump sheer graphical horsepower every time.

Once the gameplay begins, however, the thematic momentum begins to fizzle.  Data Jammers provides a relatively small set of "verbs" or actions to take within the world. Players can move horizontally and vertically over the track and, if nearby enemies pose a threat, can activate a single-use bomb to destroy everything in the immediate proximity. A number of power-ups such as extra bombs and a "burn" power that lets the player destroy enemies by running into them will temporarily augment the ship, but otherwise, the player must use wit to eliminate enemies throughout the game. 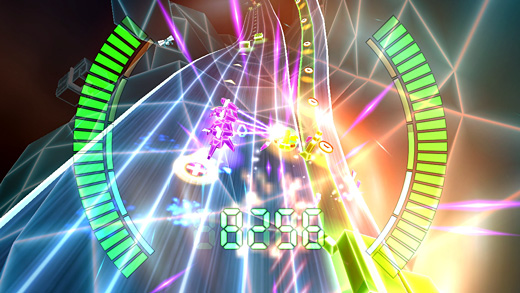 By affording such a shallow set of interactions, Data Jammers becomes easy to pick up…but it also lacks any kind of nuance that could lead to more skillful play once players become fluent with its systems.  When Digital Eel pairs that limited interactivity with an increased presence of enemies and obstacles, problems start to emerge.

Frequently, it felt like Data Jammers was a shoot-em-up where my ship had run out of bullets. Thanks to the limited supply of bombs, I typically traced a circle around the playfield, hoping that enemies would collide and take each other out.  (Oddly enough, the only time I was not on the run was during the boss battles that punctuated each chapter; one such boss battle actually required me to grab a "burn" power-up and let the boss smash me to deal damage to it.)  On top of that, there is a surprising lack of any kind of hit recovery: if I ran into an enemy, I would continually rack up damage without any kind of knockback or temporary invincibility.

To make matters worse, the UI is occasionally more of an obstacle than a resource. The HUD, which remains on screen at all times, displays the point total in large, bright numbers that can easily obstruct enemies on the bottom of the playfield; the circular life bar, on the other hand, barely brightens up when taking damage, failing to contrast effectively from both the UI's normal state and the game's energetic environments. When this lack of visual contrast pairs with the lack of hit recovery mentioned above, it can leads to surprising deaths and untimely setbacks.

These frustrating elements in Data Jammers are only compounded by the game's dynamic content generation, which fills out its static track designs with random placements of power-ups, enemies, and rings to collect for bonus points. On paper, this is an appealing idea: multiple runs through the same level follow the same track structure every time—identical turns, lane splits, and jumps—but the placement of decorations upon that track structure is different every time, providing a fresh experience for each successive playthrough.

Unfortunately, this approach to dynamic content leads to aggravation far too often, as the outcomes that emerge are almost always out of step with other aspects of the game. For casual players, bad enemy placement can lead to sudden and seemingly arbitrary difficulty spikes, moments where the player is immediately flanked by two or more enemies at once with little time to react.  And high-level players, who will ideally be playing these levels over and over in pursuit of a better score, will be just as frustrated when a long row of rings spawns on an inaccessible track segment, effectively torpedoing their run at the leaderboard.

In the end, Data Jammers: FastForward seems to be at war with itself. It's a score chase that doesn't allow for a great deal of skillful play, a cyberspace trip with elegant visuals, but a cumbersome UI. Digital Eel has shown a willingness to chip away at the edges of these problems through patches—one update in particular added lives to the game, which did alleviate some of the frustrating setbacks I experienced in my playtime—but the game's fundamental aspects never work together to create anything more than a superficially engaging experience. Rating: 4.0 out of 10.

Disclosures: This game was obtained via publisher and reviewed on the PC (Steam). Approximately seven hours of play were devoted to the single-player mode (v1.1.0), and the game was completed. There are no multiplayer modes.

Parents: At the time of this review, Data Jammers does not have an ESRB rating, and it contains no questionable content.

Deaf & Hard of Hearing: No audio cues are required to experience all of the content in the game, though some audio cues for enemy attacks can be useful for high-level play.