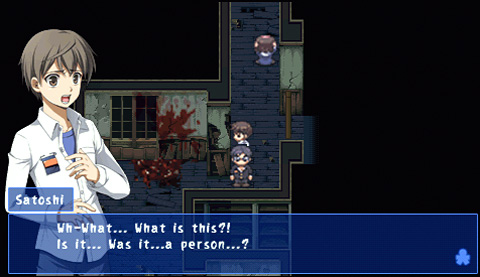 LOW No ability to skip scenes.

WTF Butter up my pooper.

is a very niche game. It's only one step removed from a visual novel, has a very strong anime and Japanese style, features retro 2D visuals, and is full of death and mutilation. It's not destined for mainstream success—and to be honest, I was more than a little surprised that XSeed Games took a chance and released it in the US at all. I'm glad they did though—for horror fans, Corpse Party is one of the best games of the year.

Corpse Party begins with seven Japanese high school students telling ghost stories to each other late at night. One of the students is being transferred to a new school, so another classmate suggests that they all participate in an occult charm of friendship that will let them stay together even when far apart. The charm goes wrong, the students (along with their home room teacher and a student's younger sister) are transported into a Hellish version of their high school, and players spend the rest of the game trying to figure out what's going on and trying to escape.

One of the great things about Corpse Party is that there isn't really a main protagonist. The playable characters change from chapter to chapter (and even within the same chapter) so the player is never exactly sure who's going to make it out alive and who's doomed. Each of the five main chapters has one "true" ending (which unlocks the next chapter) and several bad endings, but don't be fooled—even the true endings aren't necessarily good ones.

When the player isn't watching events unfold, they can explore the cursed high school and search for items and clues. The exploration segments are set up like an old SNES RPG in visuals and style, however there is no combat. There are a few simple puzzles here and there (nothing that complicated) and some chase sequences where players have to run away from evil spirits or other enemies.

Wandering around until a story scene is triggered or an item is found may sound boring (and occasionally it was), but for the most part, the story and characters were so compelling that I didn't mind. If anything, the true gameplay of Corpse Party isn't to be found in the video game mechanics, but instead in the meta-game of trying to figure out what's happening and why.  There are some great revelations and plot twists later in the game that really put a new spin on the player's understanding of earlier events.

Though the graphics are low tech (16-bit exploration with the occasional 2D anime still-frame for important scenes), the audio is anything but. Not only does the game feature some fantastic music, sound effects, and voice acting (Japanese only), but the game also has binaural audio. That essentially means players wearing regular headphones will find it sounds like the game is in surround sound. Corpse Party might not look very scary in screenshots, but when a ghost suddenly whispers right next to you, it's plenty creepy. After a while, the low tech graphics even work in the game's favor as the player starts filling in the gaps and imagining things far worse than graphics could convey.

Although I loved the game's story and suspense, Corpse Party is not without its faults. Especially early on, it can be confusing to keep the various Japanese names straight—not helped by the fact that characters will sometimes refer to others by their first name and sometimes by their last name. Additionally, although the text speed is fast, there's no way to outright skip scenes which can be annoying when replaying sections to get a different ending. Also, if players happen to miss an important story trigger or item, it can be annoying to have to search the school for it.

It's a testament to the game's story and writing that even when the game annoyed me, I still couldn't put it down. It should take the average player about 10-15 hours to complete the game (most chapters should take a couple hours to finish the first time, but the final chapter is noticeably longer and more complex than the others) but for those who want to get all of the endings and unlock all 10 bonus chapters, add several hours to that.

For players who enjoy a good mystery and love horror, pull up a chair, turn off the lights, and pop in some headphones. It's time for a Corpse Party. Rating: 9.0 out of 10.


Disclosures: This game was obtained via paid download and reviewed on the PSP. Approximately 15 hours of play were devoted to the single-player mode, and the game was completed. There are no multiplayer modes.

Parents: According to the ESRB, this game contains strong language, blood and gore, partial nudity, intense violence, sexual content. The vast majority of the disturbing imagery isn't animated and many of the worst events aren't depicted visually at all (just text and sound effects), but make no mistakes—Corpse Party is definitely not for the young or easily scared.

Deaf & Hard of Hearing: There are subtitles for all the dialogue in the game; however, the game relies heavily on audio for immersion and mood and so is not recommended for deaf or hard of hearing gamers.