You'll Wish This Was Just a Book 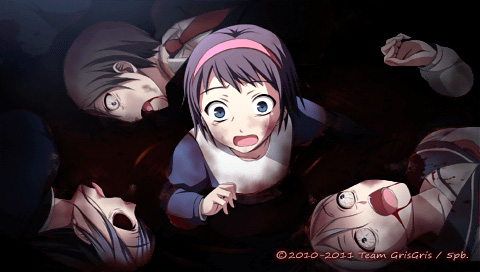 HIGH It's got some of the better writing out there.

LOW Replaying the same, long sequences after each bad ending.

Both horror games and visual novels are in interesting places right now. Players have seen much of both, gotten used to their tricks, and very quickly started looking for something more. Corpse Party: Book of Shadows provides a unique cross-section of these genres, attempting to take the best of both worlds and provide a compelling experience, but this game is definitely made for the fans; genre conventions are in full effect and offer little explanation for those unfamiliar.

The premise of Corpse Party centers around a botched seance performed by some high schoolers. They're transported to a haunted school in another dimension where murderous monsters and ghosts pursue them. The player goes through different chapters of this experience, switching characters and moving through time to see different angles of the situation. Each chapter has multiple endings—a good one that grants progress, and several death scenes that require a retry. As with most visual novels, there are a bunch of features to scratch completionist urges and to encourage replaying through the chapters, like a library of the artwork the player encounters, and audio diaries from the voice actors.

Playing is mostly a reading affair, watching scenes between characters and seeing how the stories connect. Corpse Party is also part adventure game, with the player taking control of a character and moving through a "board game" rendition of the school. Between scenes, the aim is usually to get items for the ultimate goal of trying to find a friend or escape the school. Events are changed by a "Darkening" feature—a number that raises whenever the player enters particularly creepy rooms or witnesses something horrific. This adds a certain sense of randomness to the game one would expect out of a haunted house, and also adds some scare factor as creepier things happen when the Darkening is high.

Though it has a good base, Corpse Party has trouble utilizing its genres for maximum effect. The biggest sign is its attempt to explain the structure of the game as a narrative device. 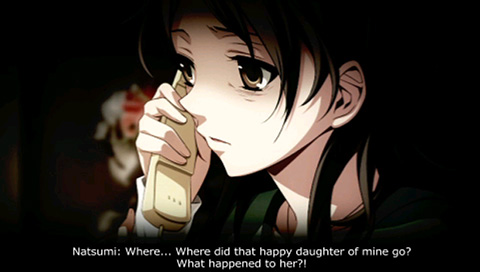 Early on, it's implied that the characters are revisiting the same moment over and over again, which ties into the usual way a player interacts with a visual novel. This idea, however, is dropped after the first chapter and we don't get much of this meta commentary to help rationalize why we restart the chapters. This is important to note because players will be repeating in order to advance, and will often have to fast forward through cut-scenes, rediscover all the items and such.

There are various tricks to this (such as saving before every choice) and other tactics those familiar with visual novels will employ, but at the same time, many of the endings aren't that interesting. A character will often die, but since little is shown, nothing special or noteworthy comes of it. This will still be enjoyable for those who savor the usual visual novel structure, but for those like me who are looking for something more, Corpse Party doesn't add much new to the palette. In particular, the main drag for me was the lack of dramatic tension, since every chapter stars a different character. Sometimes there's insight on past chapters and the game goes to various locales to switch things up,  but for most of the game it felt like I was being thrown around in the dark with little substance to it.

This leads me to the horror aspect of Corpse Party. There are some genuinely frightening moments, usually of the jump-scare variety. However, most of the horror centers around the various terrible things that only seem to happen to the girls in the cast, including gruesome accounts of disfigurement, abuse, and murder. Much of the art in the game avoids showing it graphically, so a player's mileage may vary on how much this is actually capable of inducing the creeps. I found that the game was weightless because it ostensibly contains "intense gore," but doesn't make the player witness it.  And really, some scenes just aren't convincing—nothing's scary about having the screen flash red while playing an attack sound effect most likely heard in another game.

The game would have done better relying on ambient horror instead. There were a few sequences when the player character is running away from or trying to avoid spirits that will kill them. It made going into rooms that extra scary, especially when random, mysterious dialogue would appear on the screen, hinting to the overall story and creating a lot of tension.

There is something to be said about a horror visual novel on a portable platform—it's nice to switch between playing Corpse Party on the train and hoping no one catches sight, to trying to complete a chapter before bed and freaking myself out a bit. The content can get a little convoluted and fan servicey in the way anime can get, especially with its treatment of girls and women. It will at least provide an interesting inbetween pastime, even if it's not really something that will blow your mind. Rating: 5.0 out of 10.

Disclosures: This game was obtained via paid download and reviewed on the PSP. Approximately 10 hours of play were devoted to the single-player mode, and the game was not completed. There are no multiplayer modes.

Parents: According to the ESRB, this game contains intense violence, blood and gore, sexual themes, and strong language.

Deaf & Hard of Hearing: There is text for most dialogue, though some parts of the game has ambient speaking and music without textual aid.