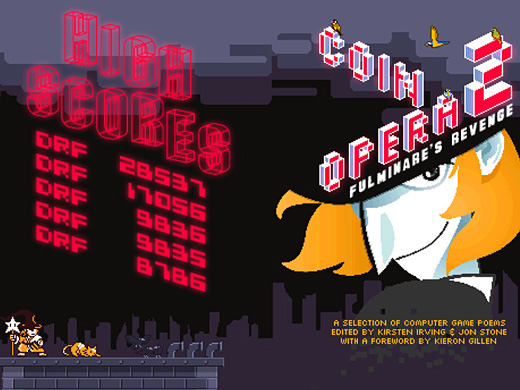 There have been some great games made out of films, but the statement seldom holds the other way round. There are some novelizations based around the more successful sagas, but these rarely reach out to an audience beyond the original fans. Other than that, few books are written which communicate with the gaming world.

We may blame this on the unique narrative structure that is inherent to software-based interaction, but at least part of the problem is that video games still hold a somewhat dubious reputation in contemporary culture. It may be for this reason that games, in their half a century of history, have practically never been in contact with what may be considered the loftiest and most elevated of the arts—poetry.

It is on these grounds that the upcoming release of Coin Opera 2: Fulminare's Revenge in the UK (see the press release) should be considered something of a milestone in the cultural history of the medium. Scheduled for publication this August, the book is a collaborative anthology of poems linked to video games—not only in the sense that they may be about video games, but also in that they are built and structured in manners that reflect, mimic, consider, comment on and (obviously) play with the structures and forms of games themselves. It is also—as the title suggests—a sequel, with an interesting conceptual history behind it.

The original Coin Opera (2009) was the very first publication of Sidekicks Press, a small independent publisher based in London founded by two of the most promising young British poets today, Jon Stone and Kirsten Irving. It was a small, hand-made anthology comprising verse about video games, put together via other artists they met through university. That first book was a matter of tentative experimentation, but the results suggested to the editors that poetry and games had a lot to say to each other—that they shared many similarities in the form of rules and restrictions underpinning them, and the importance of rhythm and repetition in the spacial architecture. Games are ripe for poetic exploration because they create their own rich worlds within and around them, while poetry, with its attentiveness to details and its eagerness to look at things from unusual angles, breathes extended life into games by suggesting new ways of seeing and experiencing them. 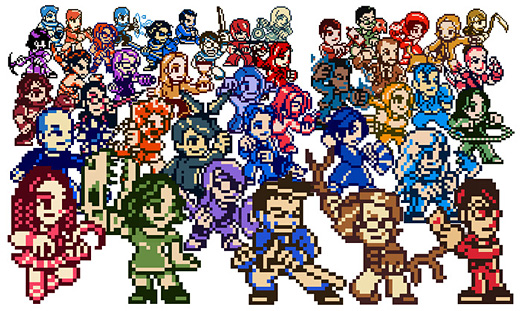 I was present at the release and I recall the editors—who are both gamers and poets themselves—discussing these aspects quite extensively. The strong connecting theme in the poems they compiled—and that they went on compiling towards this sequel—was always play or playfulness. Most of the poems in Coin Opera 2 are based on commercial or classic games over the last few decades, but many demonstrate an engagement with them that goes beyond a lyrical ode and might be viewed as an alternative form of hacking or emergent play—meddling with the world of the game in imaginative ways and using parts of them to inform and subvert typical literary tropes and topics. For example, Claire Trevien imports Braid's time-reversal mechanic into a mediation on a relationship. Editor Jon Stone drops the Roman emperor Caligula into Final Fantasy IV, making him genre-aware and hungry for a starring role. Ross Sutherland writes to each of the protagonists of Gauntlet in the voice of whatever cruel god trapped them in an infinite loop of labyrinthine levels. Francine Rubin imagines the world as if we existed inside a game of Tetris, but also allows Tetris shapes to infect the shape and rhythm of her poem, and Harry Man recontextualises in-game chat from Minecraft as a series of existential queries. Meanwhile, the two-player poems attempt to replicate, in simplified terms, some of the mechanics of certain game genres as a poetry generation kit.

Part of the thinking that informs the project is that the way we experience games is influenced by the way we talk about them, and that a poetic engagement—a creative-critical reading, if you will—suggests and opens up new ways of understanding the games themselves. It's not enough to simply expect games to assert themselves as art—for them to be widely recognised as such requires artful interaction from the audience, and from artists in other mediums. The book, therefore, aims to reveal to a literary audience a glimpse of the hidden riches in games and gaming, while demonstrating to a gaming audience how poetry is a medium for further and deeper exploration of games.

That, and of course the sheer number of young poetry stars that come into their list of contributors, makes the anthology one of the most interesting cross-overs between gaming and another culture that have been attempted to date. It is all the more remarkable if you consider that, like all ventures in the unprofitable world of poetry, it is being produced with very modest means (and on that note, if you feel that you'd like to contribute and/or pre-order a copy, you can take part in their Kickstarter campaign.

I've had the pleasure of working with Stone and Irving in my own work in criticism, and while articles such as those they are publishing on poetry in video games or gender in games already do much to exemplify their approach, I think the most revealing statement is one that Jon Stone made to me in private (quoted with permission): "We want to convince gamers that poetry has a unique role to play in how we continue to talk about and understand games, and we want to convince poetry readers—and a more general audience—that there is so much more to games than escapist entertainment. That's our mission with Coin Opera 2."

And to my knowledge, that's one mission that no-one has undertaken before, not with such seriousness, and certainly not with a project so congruent and of such a scale.

… just by the japanese.

Street fighter 2 : The animated movie was a movie very close to the feel of the videogame world SF2 created.

Then look at the space also below that “customers that bought this also bought”.