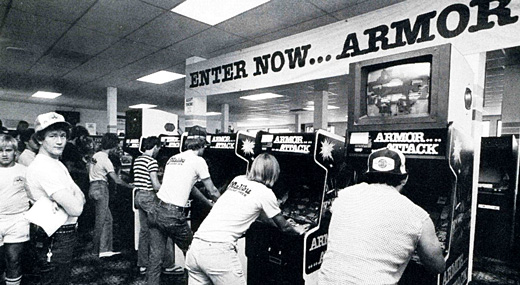 is a documentary focused on the 80's heyday of arcades, and a great companion piece to The King of Kong: A Fistful of Quarters. It focuses on Twin Galaxies' founder Walter Day, and many of the infamous players from that era that make appearances in King of Kong. Also profiled are some lesser known heroes from that time period, such as Ben Gold, Joel West, Sam Blackburn, and more. Overall about a dozen are mentioned, all of which are well known in the tight knit retro-game record-holder community. Most specifically, it focuses on the members involved in the 1982 photo shoot where Twin Galaxies record holders were photographed for Life Magazine.

In-depth interviews are offered with these individuals, and it's here where the film truly shines. The high score champions discuss their favorite games and why they are, practically drooling over them in the process. Basic rules of each game are explained with fancy CG, so those unfamiliar with the games will understand the gameplay.

The cast is OCD and odd enough to intrigue anyone, from the guy who collects hundreds of spiders to the guy who lives with his obese tabby cat. Their personalities are as over-the-top as most rock stars, which is intriguing as many of them were treated as rock stars during the arcade craze of the 1980s. If you find it hard to believe that men who held world records for games such as Donkey Kong, Frogger or Pac-Man had groupies, Chasing Ghosts will prove you wrong.

There is a lot of great footage taken from the 80s, everything from high score runs to Walter Day's television appearances. It's pretty impressive how much of it has been crammed into the film. I was amazed by just how absurd the arcade craze was back then, even in Walter Day's small town of Ottumwa, Iowa.

The saddest part of Chasing Ghosts is the last leg of the film, in which the decline of arcade games is discussed. Hearing how quickly the fame and sponsorships dried up for the record holders was surprisingly moving. Much like star athletes whose careers are suddenly ended with an injury, their fall from video game stardom was meteoric. This, of course, is largely attributed to the rise of home video game consoles, but Chasing Ghosts touches on other problems as well: games with less creativity, and violence in the arcades from gangs. Many of the arcades were also affected by the video game crash of 1983, and either closed down the same year or shortly thereafter.

The biggest gripe I have about Chasing Ghosts: Beyond the Arcade

is also its biggest draw: this is a movie for video game enthusiasts. If you have only a passing interest in the medium, Chasing Ghosts won't interest you much, nor will it be likely to convert you into a bigger nerd. Of course if you're into video games at all it's a must see—partly because the games themselves are interesting, and partly because the people portrayed in it are equally interesting. Viewers after info about one specific game might not be satisfied since it paints the arcade scene with a broad brush, but for those who want to know a little bit about each and every title back then, Chasing Ghosts is a different story. Rating: 8.0 out of 10.