This is What Happens When the Mario Brothers Study Classic Literature. 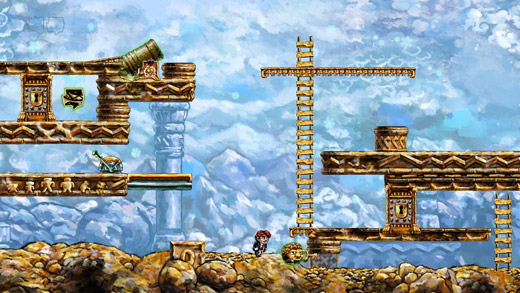 LOW Suffering self-inflicted baldness while trying to figure out how to complete World Six.

WTF The mind twister that is the game's ending.

In my opinion, this generation of gaming hasn't been that great when compared to the previous one. It seems to me that major developers have forgone innovation, and the majority of games being released are comprised of sequels and copycat titles. While there have been a few innovative titles (and there seems to be more and more as time passes), there is still a lot of catching up to do.

However, the one thing this generation holds above it's predecessor is the rise of independent games. Thanks to online services like Xbox Live and PSN, these small games offer a much needed break from the build-up of sequels and first-person shooters that currently clog the market place. While considerably smaller in stature than their big budget brethren, some of these games have provided me with fun and memorable experiences.

Braid is one of the most memorable independent games I've had the pleasure of experiencing this gaming generation. Originally released on Xbox Live before making its way onto PC and PSN, Braid offers it's players an aesthetically pleasing atmosphere with its use of water color graphics and Celtic music, while also satisfying any feelings of nostalgia thanks to a unique take on old-school 2D platforming and puzzle solving.

The gameplay consists of collecting jigsaw puzzle pieces from the game's six different worlds by solving platforming/timing puzzles through the use of different time manipulation mechanics such as rewinding and pausing time. Figuring out how to collect the pieces requires serious critical thinking and astute attention to detail. While this can sometimes become frustrating, there is a nice feeling of reward and accomplishment after finally grabbing each piece and assembling the puzzle before moving on to the next world (even after multiple playthroughs.)

Artistic presentation and clever puzzles aside, the one aspect of Braid that truly makes for a memorable game is the story and the way it's presented. Before entering each world, the player will pass by a series of books. When standing in front of a book, a passage from the book is displayed on screen. The first series of books the player comes across tells about a man named Tim who is trying to find a princess who was kidnapped by a monster because he made a mistake.

After reading through all of the texts in each world, it becomes clear that "the princess" is actually a metaphor for something else. It's through the use of these metaphors, along with quotes from various works of literature, that makes the story one of Braid's most clever puzzles. While I myself feel as though I have a pretty good understanding of the meaning behind the story (none of which I will reveal due to potential spoilers), one can never be one hundred percent certain; and it's that small percentage of uncertainty that allows Braid to linger in the back of the mind long after completion.

While the meaning of Braid may not be crystal clear, the artistic genius of Jonathan Blow (Braid's creator) shines brighter than a lighthouse through the fog. If his next creation comes anywhere near matching the quality of Braid, then the game industry might have found its next great auteur. Rating: 8.5 out of 10.

Parents: According to the ESRB, this game contains language, mild cartoon violence. There is no questionable content of any kind present in the game.

Deaf & Hard of Hearing: All story is presented in text form.