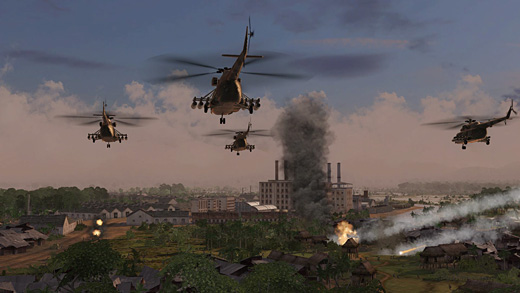 Air Conflicts: Vietnam hopes to buck the trend of mediocre Vietnam games by taking the action from the sweltering jungles of Southeast Asia to the hostile skies above them.

Set in 1962 at the start of America's involvement in the Vietnam War through the '68 Tet Offensive and beyond, the third installment of the Air Conflicts series follows the hardships of naval ensign Joe Thompson as he leads his fighter squadron against the Soviet and North Vietnamese forces. 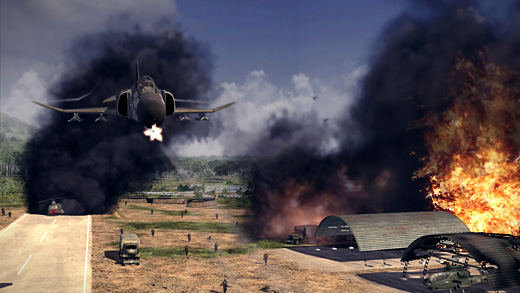 Developer Games Farm is focusing on the more arcade-like qualities of this flight title. It's definitely more Ace Combat than Jane's Combat Simulation, but that isn't a bad thing.

Instead of realistic damage, each plane has a lifebar, and like most console-based entries in this genre, the controls have been simplified to fit the limitations of a basic hand-held controller. That doesn't mean the game is bad, however—there’s definitely a place for arcade-style flight alongside the more complex options. 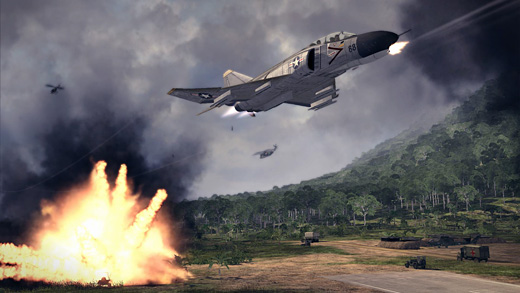 The others in the squadron accompanying Joe can be fully customized with different load-outs, ensuring access to a wide variety of destructive weaponry. With the ability to take control over the other members of his squad at a touch of a button, there should never be a situation where Joe doesn't have the right tool for the right job. Going on a bombing run with heavy air defense? Simply outfit one plane with several Sidewinders to deal with the bogies and another with a full complement of bombs to use after the skies are clear of threats.

Those pilots accompanying Thompson's side are more than just cannon fodder, though. Each one has its own experience system that levels up, allowing them to become more effective in their duties as the game progresses. Letting these allies get shot down will quickly find Joe supported by a squad of rookies. If the worst does happen and a pilot is forced to bail out of his aircraft, there is a chance to recover the helpless soul with a rescue side mission. If unsuccessful, he becomes a P.O.W. and is effectively removed from the game. 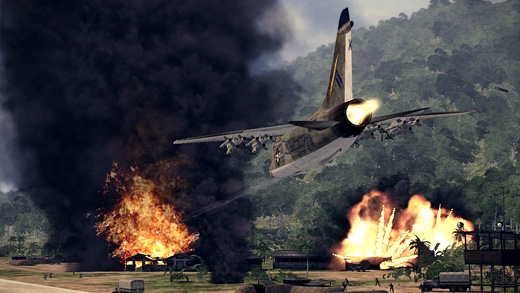 Air Conflicts has standard multiplayer with all the traditional fixings. Up to eight players can use over 20 different US, Soviet, and NVA aircraft in the traditional deathmatch, team deathmatch, and capture-the-flag settings. In addition, there are single-player skirmish maps where the player can set the number and type of enemies, as well as a variety of weather conditions. A sunny day will play completely differently than a thunderstorm and serves as excellent practice for when someone goes up against other players.

Air Conflicts: Vietnam isn't going to be a game that changes the world. The story isn't groundbreaking and the visuals aren't pretty, but it can still be an entertaining, albeit dated, game that is worth sinking a few hours into. Those with a soft spot for Ace Combat or Blazing Angels in particular should keep an eye out for it.

Disclaimer: Hands-on coverage for this article was provided at a press event sponsored by the publisher.