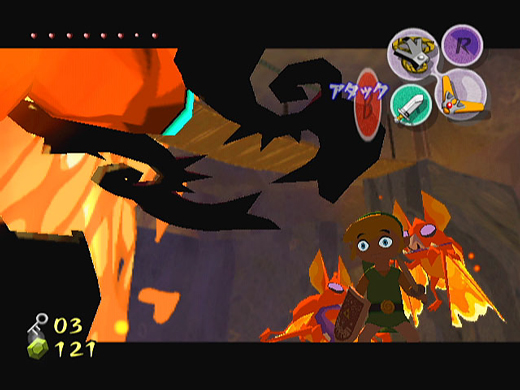 As a child, I was scared of a lot of things. I'm sure if I were 11 years old and playing The Legend of Zelda: The Wind Waker, the manic look on a moblin's face would haunt my nights. Some of the bosses are positively menacing. Even the thunderstorms in the game would make me think about how scary storm winds and lighting really are. That's if I was 11 years old.

As a full-grown adult, I find the images and themes in Wind Waker to be fearful. An adult's fear has less to do with ugly monsters, loud noises and scary faces; nothing incited by images or sounds. The kind of fear I'm talking about is that of anguish, lingering in your soul. It's consuming and taxing, forcing you to ask yourself questions you might be afraid to answer. What do you do when it's time to leave home and become independent? What do you do when the loved one you leave behind suffers because of your newfound freedom?

On Link's birthday, his grandmother makes preparations to celebrate the event, as well as the anniversary of the fabled Hero of Time, from The Legend of Zelda: Ocarina of Time, defeating the forces of evil. Link is dressed up in the traditional green garb, until a sudden turn of events results in his beloved little sister being kidnapped.

When Link leaves his home island for his adventure in a world drowned in an ocean, his grandmother is visibly distressed. Upon returning to the island after some time, the situation would have grown direr, and that's when it hit me. It's been a long time since I have spoken with my own grandmother, the woman who raised me in childhood and single-handedly ignited my videogame habit by buying me a Nintendo Entertainment System.

That realization may not have been possible without the controversial cel-shading style of Wind Waker, the ninth installment in what has become the premier series in the history of videogames. There are several achievements made within this game, least of all the game's near-flawless design and impeccable sense of pacing and progression, believe it or not. Wind Waker succeeds on levels no other game has crossed before.

The game builds upon the template Ocarina of Time laid out so many years ago, when it was once hailed the Citizen Kane of videogames. But much like the Beatles' Sgt. Pepper's Lonely Hearts Club Band is a refinement of the revolution introduced in Revolver, Wind Waker refines what was already a solid engine, including the much-imitated "Z-targeting," now appropriately called "L-targeting" because of the new controller. The camera can also be manually controlled, and is very obedient at most times, sometimes going a little crazy during battles, however never to the point of no return. Gamecritics.com's Dale Weir details fully the rest of the groundwork for the gameplay in his Ocarina of Time review. 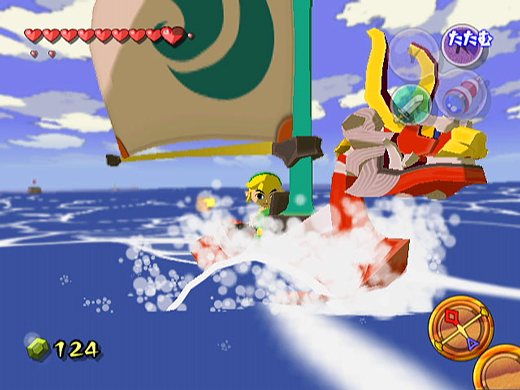 New additions to the gameplay include a stealth mode (the game heavily focuses on this at the beginning) and sidling against a wall. Link's primary method of transportation is by boat. Once you get a sail and the Wind Waker baton, you can control the winds and sail around the huge 7-by-7 grid map. In later levels, the focus will switch to Link working with a partner (via mind control) to solve the ingenious and perfectly logical puzzles within the dungeons. As Link gains new tools, he'll soon be able to test them out extensively. And every challenge you encounter can be conquered so long as you have the right tools.

One of the biggest surprises in Wind Waker is how the combat has been done. By pressing A at the right moment (usually before an enemy strikes), Link will parry the enemies' attack and possibly even disarm them. There are two different counterattacks, both of which look amazing in a heated fight. And while these moves (along with his standard roll, backflips and sidesteps) are available in the beginning of the game, the latter portions will depend on these moves heavily. The amazing thing is that the sudden increase in battles gives the illusion that Link has suddenly become a formidable foe in the midst of all his adventuring. Combine his increased arsenal of moves with the surprisingly clever enemy artificial intelligence and the ability to use enemies' weapons, and his tools make for some very pretty battles. Watching Link roll and flip around a barrage of swings and stabs while he slashes up his enemy's cape is a sight to behold.

The sailing portion (which is a hefty amount) has unpredictably overshadowed the graphics as the game's most talked-about subject. Sailing does make sense within the game's focus on exploration and wonder, and it works most of the time. A looming silhouette far off in the ocean will pique anyone's curiosity. And there are countless oddities and anomalies to find on and in the ocean, sometimes frightening, sometimes pleasant, while the player gets more and more curious.

However pretty the ocean and its detailed movements may be, it does get tiring sailing from here to there, with little bits of action peppered about. Although there is a spell that makes it possible that any destination is at least two grids away from you, sailing still requires the Wind Waker to conduct the direction of the wind. And it would've been less frustrating if you were able to skip the animation for the 'wind waking' action.

Even disregarding all that praise, Wind Waker is an amazing achievement based on the many subtle things the designers have implemented. Ocarina of Time pioneered the use of music in videogames, and that revolution continues here with the staccato notes that ring whenever you hit an enemy with your sword. Each consecutive slash plays a higher note, leading to a crescendo where the enemy disappears in a puff of smoke. The method is extremely effective, livening up lesser battles against small enemies, and magnifying the scale of a grand sword fight between you and your mortal enemies. It's almost as if a live symphony plays right alongside you, timing the music with the action on-screen. Composer Koji Kondo is undeniable in his ability to come up with compelling and catchy music, making him the most consistent music composer in videogames. He also makes excellent use of his previous work. When Wind Waker begins to allude towards a previous game in the series, Kondo knows exactly what theme from his catalogue to use. While the graphics in the game may impress, it's the music that completes the uniqueness of Wind Waker's art direction. 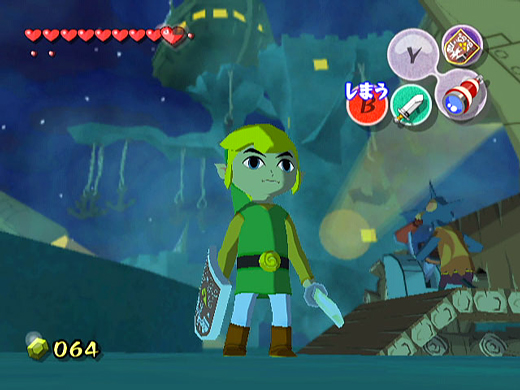 Wind Waker's key achievement lies with how its controversial graphics were put to use. Simply put, no other game has been able to as accurately capture human emotions as Link's latest adventure. When Tidus of Final Fantasy X began to wince as he laughed for the first time, I seriously thought he was in pain. Ryo Hazuki of the Shenmue series looks like the only thing he feels is dull anger, signified by a small frown and tightening of the eyebrows. When a character in Metal Gear Solid cries, all there is to see is an empty and decrepit shell of polygons, textures and code, folding under the weight of their creator's frustration to accurately convey an emotion as complex as despair.

When Link's grandmother misses him, the lines and dots that form her sad face compelled me to remember my own grandmother. Therein lies the game's true worth for me. Never before have videogame characters been so convincing with their minimalist yet exaggerated expressions. Link's eyes also follow the action, signaling the impression and urgency that the player is controlling an avatar, or a child, with a spirit that needs your guidance to survive.

When I talk about the game inducing fear, I mean more than just the scary monsters: the fear of leaving home someday with nothing but the clothes on your back, whether it's for college or to take down an evil overlord; the fear that the loved one you left behind may be irreparably damaged because of your departure. These fears are all too real within our world, or at least with my grandmother and mine. These are the kind of fears a child may have difficulty in understanding, which is why it is represented in the game in such a subdued manner. How could a child like Link know that his grandmother would be in a state of self-deprivation when he left? Do I even know if my own grandmother feels similarly?

Childhood is a time for being carefree and curious, which the game also accurately portrays, but also it's a time for deep paranoia and terror, especially in the times we're living in. In a world that constantly questions morality, children need a parent's guidance to survive, and they need definable boundaries to keep sane in a world that stubbornly refuses to keep it simple.

The Legend of Zelda: The Wind Waker is more than just a prime example of excellent, near-flawless game design and beautifully expressive art direction. It's the vessel in which you become a hero in a world where the lines between good and evil are clearly drawn. It's where the terrifying and the heartening can be found in easily identifiable landmarks, from a volcano to home where grandma's soup is boiling hot for you. It's where any challenge can be overcome with the abilities you have. It's a lot like being 11 years old again, except that I'm playing it as a 21-year-old man. Because of the game's subtle tributes to the deeper complexities in life, the game is no less compelling than if I were playing it as a child. The difference is that as an adult, I can herald it as a true work of beauty. Rating: 10 out of 10

Parents should actually encourage their children to play this. The game's graphics are very kid-friendly, but they also have plenty of mind-exercising puzzles that are never too difficult. And thanks to the added Game Boy Advance connectivity feature of the Tingle Tuner (which has one player play the game while the other navigates, bombs and uncovers secrets with the GBA), it's ideal for a parent/child bonding activity.

Fans of Zelda games probably already own this, loving every moment. Fans of RPGs will like the increased emphasis on the plot, especially in explaining the mythology of the entire series.

Fans of action-oriented games will love the pumped-up combat engine, which makes for some very visceral thrills as the game progresses.

Prospective Zelda fans would have no trouble using this as their introduction.

Deaf and Hard of Hearing gamers can rely on text boxes to read the story, however a lot of the game relies on audio cues that aren't necessary to beat the game.