This game earns and justifies every inch of virtual real estate in it. If Gears of War is anything at all, it is compelling evidence that videogames can be enjoyed purely as a visual and aural experience. Don't get me wrong, it's also a fun, frenzied shooter. But the one thing that sticks out in most people's minds about this game is the presentation, and that's precisely where its triumphs lie.

No other console game has provided this much detail, that many visible alien pores, this many expended clips, that many shiny intestines and this much buckets of thick, syrupy blood coating the screen. Say what you will about the game's vapid story, violence and its prevalent "Fuck yeah" attitude. But this is great interior and exterior videogame designing.

Lead Designer Cliff Bleszinski has dubbed the style destroyed beauty. Stand in the midst of all that destroyed beauty-of crumbled nongeographically European buildings and infrastructure-and you'll notice that no textures are repeated or glossed over. Or if you could pop your head up from your cover, try staring into the muzzle flashes from guns blasting in a darkened building across the street. It's there where you will find the game's heart-flashes of brilliance in an otherwise mundane setting. 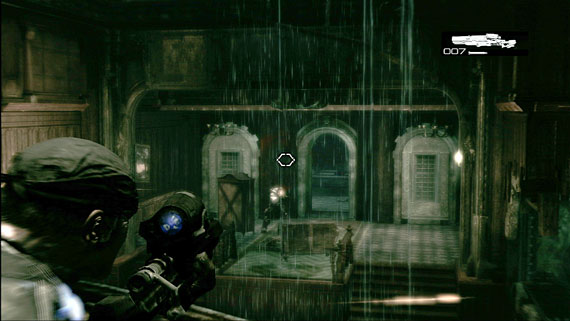 Outside of the presentation, the game is everything we've all seen before. In a thinly veiled critique of the current Middle Eastern conflicts and a realization of every environmentalist's nightmare, aliens from under the planet Sera's crust rise up and retaliate against humans using and fighting over a precious fuel source. The vaunted stop ‘n' pop gameplay is only a refined version of what we've seen in shooters in the past decade or so. The protagonists appear to be nothing but former linebackers, one of them voiced by a parody of linebackers, Office Linebacker Terry Tate. All of them are smart alecks, but none would exactly make great dinner conversation (i.e. "Eat shit and die," "Shit yeah," and "That's my kinda shit").

In the multiplayer modes, weapon balance issues pop up. The much-ballyhooed chainsaw lives up to the hype, but go against another chainsaw and it's really luck of the draw. Not exactly what you'd want to hear regarding a skill-based shooting game. Players can also melee each other with grenades, which result in instant kills. There's little to guard against this. There's also major hit detection issues (e.g. players die from a chainsaw even though they were able to roll away, or being able to "tag" people with grenades from several feet away).

Despite the developers' name, I also couldn't shake the feeling how decidedly "un-epic" this game felt. It mostly is a result of a design decision to keep big fights to a minimum, leaving most of the action to street corner skirmishes. Another problem is a lack of compelling context. Exactly how does main character Marcus Fenix feel about revisiting the decrepit home of his father, who was killed during the conflict? How important is it that the soldiers hold their position or push forward? What lives are at stake besides their own?

But enough of that. The game looks, feels and sounds great, that's all that anyone really needs to care about. I'm not being facetious. Even during the multiplayer, it's fun just watching people play the game. And that's where Gears of War's lasting legacy is-debuting the third Unreal Engine, which will be utilized by dozens of other architects in the near future. We've never seen anything like this game, but we'll be seeing plenty of its DNA very soon. Rating: 8.5 out of 10

Incidentally, the debut of the Unreal Engine 3 was actually on a little-known but well-received PC title called RoboBlitz.