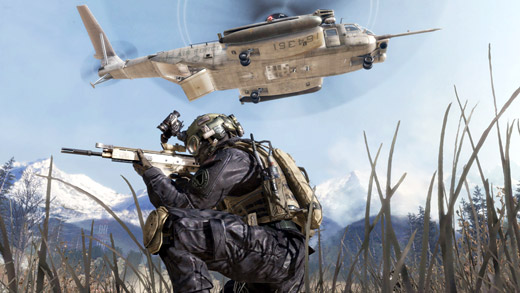 In my review of Call of Duty: Modern Warfare 2, I disagree with my peers that the game is not a compelling example for games as art, rather it's perfect for a sports argument. Take 36-year-old David Dague of Chicago. When interviewed by The Associated Press, he said the game's launch is like the start of football season for a sports fan, and the comparison couldn't be more fitting.

But there's another, more obvious landmark the game reaches in the form of its controversial level, "No Russian."

In it, the game allows you to play an American implant into the Ultranationalist Russian terror cell, forced to take part in an all-out assault on a civilian airport in Russia, beginning with an assault rifle attack at a security checkpoint.

It's the game groping for an argument that games can be affecting and relevant art. In the end, Modern Warfare 2 is definitely art, but it's as confused, awkward and juvenile as several other titles you can mention.

Still, I believe it was a brave decision on Infinity Ward's part to portray this horrific act ripped straight from the headlines. Today it evokes most recently the tragic shooting at Fort Hood, where a seemingly disgruntled Muslim Army major opened fire at dozens similarly lined up as in the game, killing 13 people.

It also evokes most recently the shattering Mumbai attacks last year. And it mirrors the 1985 simultaneous attack in airports in Italy and Austria. The Abu Nidal Organization laid claim for that attack involving assault rifles and grenades, which killed 19 total people.

In this new level, it appears the player, despite playing a terrorist, is held hostage to the narrative. They are being forced to kill dozens of innocents. This is no sandbox. Infinity Ward has a figurative gun to your head.

It made me think naturally back to the Columbine shooting, and the video game that incident spawned, indie-created Super Columbine Massacre RPG! Its creator, Danny Ledonne, drew international fire for the creation, despite its intention to force a question on players. He was blamed on CNN for being a part of a subculture that worships terrorists. But his intent was only to ask players hard questions, something he feels gamers are prepared for.

"Frankly I think video games are ready for anti-war video games, and by that I don't mean a game designed by Ian Bogost about protesting outside city hall," he said in an interview with me. "I mean a game, like film such as Born on the Fourth of July or All's Quiet on the Western Front, challenges players to view the moral failure that war constitutes, to become the disillusioned soldier who refuses to deploy." 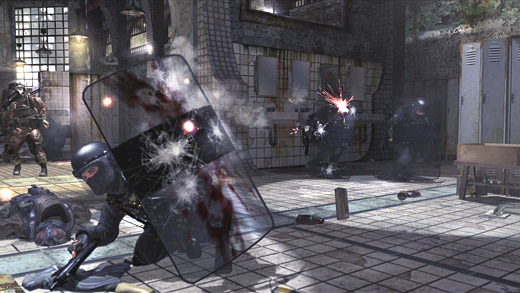 Although he had not yet heard about the Modern Warfare 2 level, he believes many military shooters like the Call of Duty series "dignifies war-marking and exalts organized violence when executed by the correct factions." It's not surprising, then, that the American military uses first-person shooters to condition its troops.

"SCMRPG calls this violence and its origins into question, forcing the player to introspect into the purpose and meaning of such violence, rather than legitimizing it in the conventional context that Call of Duty does," he says.

It's baffling to him that critics of the Grand Theft Auto series keep silent on military shooters, because they promulgate a pro-military, sanctioned violence ideology. "It is clear that violence can be justified in the minds of some when represented through a certain cultural lens. I look forward to games that challenge that, as some indie Flash games such as Border Patrol, September 12 or Muslim Massacre have by satirizing the neoconservative's position on border security and U.S. foreign policy."

Ledonne goes on to hope for games where you're faced with decisions on whether to follow orders. In the airport scene, there is no such choice. You either watch the horror, or take part, but the only reason why the player's character doesn't just off the terror leader right then and there is to prolong the story.

"Would you rape an Iraqi woman if the rest of your squad was?" he asks. "Would you hook electrodes up to a hooded detainee's genitals if it were deemed standard operating procedure? Would you drop white phosphorous from a helicopter or indiscriminately blow up a building from a predator drone if it were 'just following orders?' Would you tell your wife about any of it when you returned home? These are the questions modern war games should be asking players."

I agree. But first I think there needs to be that first step. As deplorable as it may sound to advocate a simulation of reality-based slaughter, it's a conversation starter, and the conversation needs to be had before video games can address the issues Ledonne advocates. He made a bold statement through his game, and he was reviled for it.

As clumsy as it is, Modern Warfare 2 has too broken the taboo that player-controlled terror attacks can't be done, at least in mainstream, high-budget titles. Infinity Ward and Activision shrink away from the controversy a bit, giving the player an option to skip the scene and making the obvious "American undercover" plot point.

But it's a start, and I applaud Infinity Ward for decision regardless. This level alone has assured the game's place in history, and the taboo needed to be put out there. Now that the door has been opened, I can only hope another developer can evoke that similarly chilling feeling, without having to evoke the TV serial dramas the game is so obviously and embarrassingly influenced by.

One thing that no one has pointed out is that you can play the stage without killing any civs. Like you said in your review Gene, is that playing MW2 is like controlling the camera of a movie. This scene wouldn’t of had as much of an impact if it were played back in a news reel fashion (although they should have had that option for people who skipped the level). Seeing the massacre while standing along the side of the bad guy is the most horrific sight I have played in any game. Two more things to point out… Read more »

Interesting post. I haven’t played MW2 and don’t plan on it, but my thoughts on the issue in general are very mixed. However, I take serious issue with the idea that “Muslim Massacre” is somehow a satire of US foreign policy, especially in light of this: http://forums.theirisnetwork.org/viewtopic.php?f=15&t=1316