Caught in a Bad Bromance 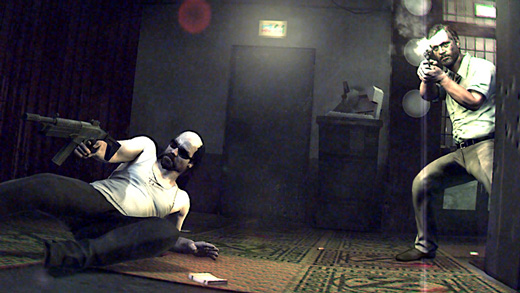 WTF: The level where you run around naked with more open bloody wounds than Jesus in Mel Gibson's The Passion of the Christ.

Hideously profane and nearly devoid of any thrills, the only highlight of Io Interactive's Kane & Lynch followup is the camera work and visual style, aping a YouTube look to give the entire game a documentary flair.

That was not easy for me to write, only because of my personal affinity for Io Interactive's flagship Hitman series. Hitman is so breathlessly innovative, the rest of the industry has yet to catch up to its courageous pacificism. The games discourage kills and emphasize logical brain work and finesse, but nothing as complimentary can be said about  Dog Days. Players have probably already seen several games far better than this. I feel bad even mentioning Gears of War in the same paragraph.

Try this: imagine playing Mass Effect 2, with its so-so cover system, penchant for forecasting a gunfight by crowding a room with chest-high cover, and not-so-great enemy artificial intelligence. Now, take away the super powers that added some diversity to the battles, the sometimes necessary teamplay mechanic, solid aiming, and guns that felt heavy and great. Oh, and remove the promise of great dialogue and an intriguing and operatic high-stakes plot.

Dog Days is what's left over. 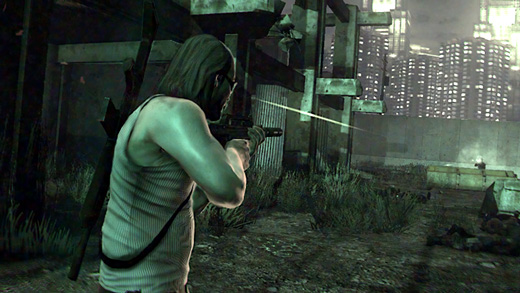 Astonishingly, the ill-received prequel to Dog Days had a wider variety of gameplay. In the first game, an early level was a bank heist that felt multi-tiered, and the game had squad mechanics that added a semblance of strategy to the proceedings. This time around, players can't control AI partner Kane—he is mostly noticeable when his avatar is clipping into Lynch's, or when sharing the same cover.

Shanghai is represented well here, with evocative neon lights and an appropriate amount of grime. Can't say much about its people though. I know the stereotype: all Asians look the same. I never thought I'd see it taken quite so literally, though. Cop A has the exact same face as Cop B through Z.

Lynch's girlfriend Xiu is classic sexism at work. We never find out anything about her other than that she "means a lot" to Lynch. She ends up getting killed halfway through the adventure to set off a pathetic revenge plot that begins with Kane and Lynch running through an entire chapter completely naked in the rain with dozens of open bloody wounds, their cocks pixelated out, cursing and whimpering the whole way while fighting more cops and thugs.

Yes the paragraph above is a spoiler, but the scene I described wasn't so much shocking as it was just disappointing, sad and discomforting. Please take it as less of a spoiler, and more as a warning.

The game's online component is at least somewhat interesting, turning online griefing and team killing into a gameplay rule. As with anything, the game gets a bit more enjoyable when played with other people and the YouTube aesthetic works a lot better without the thinly veiled homoeroticism of Kane and Lynch muttering such insights as, "I've got a bad feeling about this," and "What the f**k."

There isn't much else to say about the four-hour experience. Kane & Lynch 2: Dog Days would probably feel like a better game if many other games never happened, including its own prequel. Gameplay like what's on display here has happened—and was perfected—years ago. Intellectually, even things like the relatively primitive Grand Theft Auto III have provided better insight into our culture of violence and crime. With this series, Io Interactive continues to be caught up in a bad bromance they need to leave behind. Rating: 1.0 out of 10.

Disclosures: This game was obtained via publisher and reviewed on the Xbox 360. About four hours of play was spent in the single-player campaign, and two hours in multiplayer modes.

Parents: According to the ESRB, the game is rating Mature, with blood, drug reference, intense violence, partial nudity and strong language. The game is very offensive and is laced with profanity. Two women are killed in the game, one of whom is naked and the other is implied to be raped as well. The game is completely unsuitable for nonadults.

Deaf & Hard of Hearing: The game's dialogue is subtitled. There are no audio clues necessary for gameplay.

I couldn’t even finish the demo, because I got motion sickness from all the “youtube”-effects. With the effects and filters switched off I noticed how ugly looking the world actually was. The gameplay didn’t thrill me either and the heavy cursing was just juvenile.

Brilliant review. Entertaining, insightful, and it’s saved me about three quid as I WON’T be buying it from Gamestation’s discount section in about a month’s time.

I never played the original, either, but the storyline had an interesting premise, and I’m still tempted to try it. The sequal sounds like it doesn’t even have that.