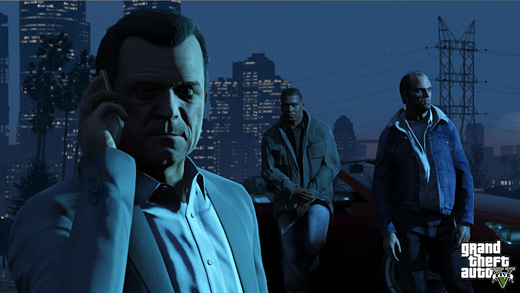 HIGH The drive from Blaine County back to Los Santos, and seeing the skyline for the first time. It was only then that I began to grasp just how much larger the map was compared to any other game.

LOW Trevor and Michael fighting over the same thing for the fifteenth time.

(GTA5) encapsulates the cynical tale that follows it.

"Well, a sense of overriding futility is a vital part of the process," says a psychiatrist to one of the game's three main characters, Michael De Santa. "Embrace it."

From a narrative standpoint, GTA5 is an exercise in futility. The story is not its strongest point, nor is it the strongest in the series. Although much of the dialogue is well-written and the plot engaging enough to plow through, none of it contains any real sense of joy or beauty. Instead, what we get is oppressive nihilism embodied in the three main characters: Michael, Franklin Clinton and Trevor Phillips.

Like many narratives in Rockstar's groundbreaking series, its protagonists are locked in a cycle of deprivation they seem incapable of leaving behind, or even disliking. Instead, they embrace it. Michael, Franklin Clinton and Trevor Phillips are not heroes or antiheroes. They are villains, they're in it for themselves with disregard for anyone else; even for each other. It's hard to tell whether any of them go through any real changes over the course of what ends up being similar to a 40-hour TV series full of heists starring three dysfunctional, bickering men.

However, GTA5 is not a game created in vain, thanks to a welcome return to the more outlandish and multi-tiered mission structure of the seminal Grand Theft Auto: San Andreas. Remember that title's thrilling climax involving a fire truck and a freeway chase? GTA5 matches that vigor and exuberance within the first hour. More importantly, playing through a mission between three different perspectives is haphazardly brilliant. 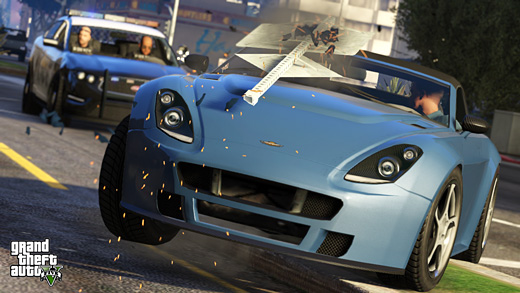 During a nighttime raid of a ship, it's a bit of a revelation to almost instantly switch from sniping gameplay support fire with one character to surprisingly competent stealth with another character who's sneaking in. When it works, it clicks, and it feels like playing a cooperative game all by yourself while experiencing three different gameplay and narrative moments happening at the same time.

When left to its own devices, the AI of the other main characters can handle their own as well. There's no babysitting. If you choose to stealth it all the way through as the character creeping aboard the ship, the AI sniper will work efficiently to take out targets whenever appropriate. It's exceptional to see it hum so smoothly when it comes together. During those glorious moments during a heist, it feels like GTA creators Dan and Sam Houser were successful in trying to make a new kind of open-world game.

On the other hand, those glorious moments are fleeting. Missions often funnel players into being a specific character for narrative purposes, even though there are two other moving parts. It's a problem similar to what GTA games have long struggled with—offering an immersive open world, yet directing players down whatever rabbit hole they want at that moment. For example, the devs still haven't gotten rid of the notorious exposition expeditions that have players driving to the start of a mission while the characters banter back and forth.

Likewise, the momentum building up to the big heists are sometimes exciting, but often they break the pace by forcing players to fetch supplies in preparation. In an ill-advised, late-game mission, the player is meant to fetch three cars from three separate locations, using photos and geo-tagging sent via the in-game cell phone. The cars weren't difficult to find, but they were definitely boring to find. It's also a concern that so much of the game is dominated by the same old GTA gameplay of driving here, killing folks there.

Mechanically speaking, it's a fact that this is the most competent of all the GTA games. The cover system isn't so finicky anymore. Checkpoints are scattered liberally throughout missions, and if players fail too many times, they can skip ahead to the next checkpoint. Cabs are now available almost any time. The user interface is beautiful and easy to use. Cars here are not as floaty as GTA4's, but retain their heft to make races as thrilling as they are challenging. After playing this, it seems clear that parts of Red Dead Redemption and Max Payne 3 were dry runs for GTA5. 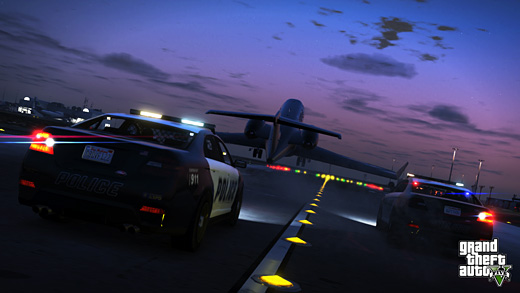 It's also important to note that the in-game score—a first for the series—is perhaps the greatest ever written for a crime action game. If some missions are reminiscent of the heist scenes in Michael Mann's crime epic Heat (and one is nearly a frame-by-frame remake) the syncopated score is similarly unnerving.

In addition to the improvements, there are a few surprising and disappointing changes. The character customization is surprisingly limited (although that will surely be fixed in the online portion released in October). Melee combat is as boring as ever, and the side missions, while plentiful, are a tremendous step back from San Andreas's perpetual turf war, gym fights and robbery missions. It was also surprising that after so many years, the GTA series still has a disappointing lack of interior areas.

As mentioned earlier, the characters also lack dynamism. If Franklin represents the player starting out in a GTA game and Michael represents one who's finished, Trevor is most certainly representing the player who's completely lost the plot, and is content with mayhem and destruction. He kills indiscriminately. His temper flares up with no warning. He tests the boundaries of the world he lives in. He is basically anyone who picks up a controller to screw around in a GTA game. Imagine Heath Ledger's Joker character acted by Jack Nicholson, and that's close to imagining how unpredictable and intimidating he can be.

Unfortunately, Rockstar doesn't really go anywhere with Trevor, the other two, nor the plot in general. Every conversation between Trevor and Michael feels the same from start to finish, constantly bickering about issues that most grown men would handle over a beer. Franklin has potential (and I loved the relationship with his best pal Lamar) but he's given so little backstory, I found it hard to care for him as well.

Even with as many downs as ups, Grand Theft Auto V

is still a significant achievement in design. Playing missions from multiple perspectives is a creative spark that will surely light up the next generation, and I'm confident the Housers have even bigger ambitions. They'll keep building upon this template and inch tantalizingly closer to creating their perfect game. GTA5 isn't it, but its flashes of brilliance will endure. Rating: 8.0 out of 10.

Parents: According to the ESRB, this game contains: blood and gore, intense violence, mature humor, nudity, strong language, strong sexual content, use of drugs and alcohol. It's Grand Theft Auto. People are killed, tortured, there's full-frontal nudity, and the developers show a worrying intimacy with cocaine. So… it's definitely NOT for kids, then.

Deaf & Hard of Hearing: Subtitles are available, and when attacked, there are no directional indicators although enemies do appear on the mini-map. Otherwise, sound cues are not necessary throughout the game's main storyline.

Excellent review of the single-player portion, though the characters being villains is something I enjoy. They didn’t go back to San Andreas levels of customization and options for fun, but the game resolves a lot of the things I disliked about the otherwise excellent GTA IV. The online portion, however, is a mess. It’s time for the gaming press to do its goddamn job and get some consumer warnings out there. Despite a 2 week delay, two patches and almost a week of what is basically a $60 beta test, the game is in a state in which you lose… Read more »

Good review, but you got some things wrong:

1. There’s a tone of clothing customization, you just need to find the items by doing specific actions.
2. There are perpetual missions everywhere, from random events to tons of replayable side missions and minigames.
3. Melee combat is actually a big step up from any of the previous GTA games, even IV.

change clothes doesn’t mean costumizable character. You have like 3 beards and hair cut for each character.

Gold review but i dont agree with your complaints about it being too much drive to a, kill x and having too much exposition. That’s like singling out Mario for being jumpy, IMO. Driving and shooting is the core gameplay and the exposition keeps it going and injects a bit of meaning to the proceedings. It’s what I like about the game. If you don’t like either element then you’re going to have a hard time with the game just like I have a hard time with hardcore RPGs. I think even then GTA V has plenty of distractions to… Read more »