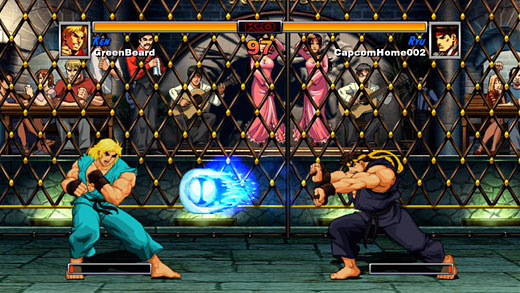 Two articles (linked to below) touch on the subject of experience behind a game critic. The most recent example is MTV's Stephen Totilo not being adept at basic moves for Street Fighter II, a heralded and historically important game series.

As video games mature, so does its criticism. Totilo and N'Gai Croal (also linked below) bring a certain air of legitimacy in the mainstream media that many other writers in the industry lack.

However to maintain a level of balance and fairness, a critic needs to be very well rounded.

Doing a hurricane kick in Street Fighter is as basic for a gamer as what a film lover would do in citing a movie like Annie Hall or Citizen Kane.

Sure a gamer need not necessarily need to grow up in that era, or be heavily involved in the culture.

But imagine if a movie critic knew nothing of Annie Hall? Or Raging Bull? Imagine a videogame critic not even knowing how to do the most basic move in fighting games?
As long as the critic is forthcoming about it, I don't think any credibility would be lost.

However, and more importantly, I would know who to trust less.

The examples he cites are true, but most critics or commentators are required to have a certain requisite amount of knowledge in their field. A young woman was just hired to be the weather anchor for a major TV news outlet in Hawaii. I don't know her well enough yet, but I don't believe she has a deep background in meteorology.

This brings me to another question: What exactly is the "requisite" experience for a game critic? How steeped in knowledge should he/she be?

For game criticism to break through the mainstream while maintaining credibility with its core audience, a critic or columnist must be well versed in all genres. Specifically for something like fighting games, Street Fighter II would be a must.

And why not try out some of the more rudimentary moves for that game? Is there no desire to learn? Where is the sense of discovery in mining a hobby's past? Are archaic graphics and gameplay systems that much of a barrier in a critic's responsibility to experience and taste all there could be? A music critic would never bookend his experience with his first album to his last. A proper critic would reach into decades of rich history, to obtain a larger understanding of the industry as well as context.

Sure games are a far greater timesink than an LP or Blu-Ray disc. But the games industry is working hard for mainstream legitimacy. Game critics, in turn, should work that much harder.

At the age of 19 I am just beginning to set out as a games reviewer. Ever since I laid hands on an Atari and sat for hours playing Rainbow islands I have always known that I had a passion for games. I have played hundreds of titles over several console generations, but that alone doesn’t give me the ammunition to critique. What does is what everybody has, an opinion. It may not be the generalist view, but being able to articulate an idea into allowing people to read it, understand it, oppose it, support it or agree with it… Read more »

If for a critic to have an authoritative opinion about a game it is necessary they know something about the game or genre history, would it be fair to suggest that a critic’s opinions on a game’s production be rendered suspicious if they themselves have no background in game development? I think this is a closer analogy to David Stone’s observation about the lack of pro player experience from most sports broadcasters. You’ll often hear a critic comment upon the quality of a game’s level design, but how often do they actually describe what is good or bad about it,… Read more »

extraordinary post, Reharl… it’s incisive and (IMO) quite accurate. I’d have to say i agree with nearly everything you said.

When sampling someone’s structured opinion, I am generally more interested in their residual impressions than the strength of the contextualization they may be able to bring to the subject. As long as the writer is able to describe what he has felt or thought, and why that particular content assumed a degree of significance to him, I am content – and require nothing more of the person who has competently penned such opinion. Having said this, there is no denying that experience molds perception. The glee a person extracts from a game can become significantly diminished in another person who… Read more »

To demand that game critics should be “well versed in all genres” seems rather extreme. Most reviewers (regardless of whether they’re working for mainstream magazines or niche websites) have more than one genre of expertise, and at the very least also have some superficial knowledge about most types of games available. But why would their writing improve significantly – and also be of greater interest to the general public and/or more well-established critics – if they were demanded by their editors to acquire extensive knowledge about ALL genres? It’s unclear to me exactly why, to take just one example, a… Read more »

To illustrate your point Gene, Street Fighter-style games are based on the perception of martial arts created from Enter the Dragon and Blood Sport. With the current rise in prominance of MMA and UFC, the very definition of martial arts is changing and as I tried to point out in my review of Virtua Fighter 4, fighting games have failed to evolve with reality of what a fighting has become. Its our role as critics to point out these discrepancies, otherwise, the medium as a whole ends up looking silly to the rest of the world and we become limited… Read more »

The question I have is: Does he not know how to pull off such a move, or can he just not do it reliably? Lord knows I still can’t pull off a dragon punch reliably, but I know Street Fighter well enough to comment on it.

Hi, Gene, Thanks for the thought-provoking post. I love video games. With lots of time and practice, I’ve completed lots of them. With even more time and practice, I can get gold medal rankings (in Shadow of Rome, for instance). However, I’m not good at them. Enthusiasm and perseverance serve me better in some game genres than in others, especially games that are slower-paced and full of text. That doesn’t mean I don’t like, play, and complete fast-paced action games, or other kinds of games in general–just that a turn-based RPG fits very well with the set of skills I… Read more »

Great blog, Gene. Hope we see more of these. I think the one thing that hasn’t been answered is the one question you posed. What are Totilo’s credentials? What games has he completed? I didn’t even hear about him at all until last year, when MTV started to get serious about having a gaming blog. I still say we shouldn’t judge Totilo until we know these answers. And I still stand by the idea that gaming is both skill and art, and having the theoretical knowledge of a skill doesn’t automatically mean it can be performed. Just ask any practicing… Read more »

Where are these links of which you speak?