What if God was One of Us… Specifically, Lady Gaga? 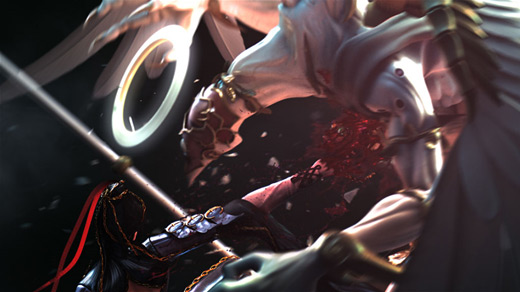 WTF This game teaches us that even angels engage in pedophilia.

Imagine a woman with the devil-may-care sassiness of millennial fashionista Lady Gaga, but with powers that make her literally stronger than God. Toss her in a game with some Devil May Cry mechanics, and that's Bayonetta in a nutshell.

Where we may see a crowded action-adventure genre, video game auteur and Devil May Cry creator Hideki Kamiya sees only a catwalk for his runway model to strut her stuff on. She saunters in —spotlights and all—with the poise, abandon and exaggerated sexuality of a drag queen. "I feel like a fucking celebrity in this town," she coos to a Zeppelin-sized enemy from the heavens, before a bus comes crashing down in front of her with the force of a rock'n'roll power chord. And man, if walking in heels is a lost art for some, Bayonetta does it like pop art with hand cannons strapped to her stilettos.

The very idea of femininity as a dominating force lends Bayonetta a unique voice. Everything from her shoes to her hair is a force of nature. When she throws a punch, a huge demonic fist of hair mimics it. She can conjure up iron maidens and guillotines out of thin air, and forget about Rose McGowan's M4 Carbine leg from Robert Rodriguez's Planet Terror. Bayonetta gets two rocket launchers, plus she gets to keep her lean legs.

The visuals are clean, crisp and highly stylized until you actually start the fighting, which happens within half a millisecond of taking control of the character. The battle that commences is like an on-screen personification of noise art. Audio and visual cues usually warn the player of incoming attacks, and the player has to make sense of all the magical explosions, the blaring score, and all the hair tossing enemies violently across the screen. It's tough to make out and may be an acquired taste, but to say that's a bad thing is like calling a Sonic Youth record nothing but squiggly noises and feedback.

If all of that sounded familiar though, that's because it is. The electrifying and wacky aesthetic is just hair and makeup for gameplay that's essentially a mash-up of Kamiya's curriculum vitae. Visual and audio cues before dodging an enemy attack, and then making the whole world (except you) move in slow motion? That's a hat tip to Viewtiful Joe from Kamiya's former and now-defunct studio, Clover. Two-button combos basing much on timing? Dante did it. Switching up weapons in the middle of a juggling combo? Dante did do that too. 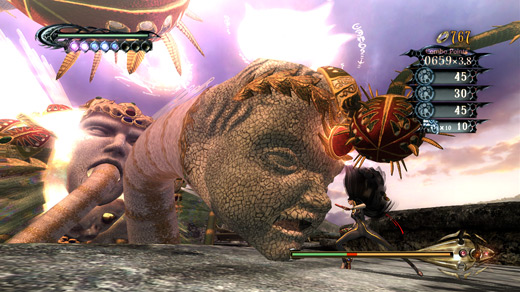 So what didn't Dante do? Well for one thing, he doesn't have any Mario in his DNA. Bayonetta is from the Super Mario Galaxy level design school of spatial loopiness, even during its boss battles. The screen can twist around as Bayonetta runs up an enemy's arm, or tongue, or whatever appendage she's aiming to crush under her 50-caliber stilettos. Holding down attack buttons also allows Bayonetta to shoot out her hands and feet. The bullets ricochet off walls, ceilings and floors, magically tracking enemies. It adds to that feeling of Bayonetta being an onslaught to be reckoned with.

Dante also didn't slap on old-school gaming tributes that run for eight minutes too long. There is a tribute to Sega's Space Harrier that is amusing and cute for about two minutes. You're then quickly reminded why these games have faded into history.

Some people may say that Bayonetta is too crazy for them. Really? I wanted crazier. The wacky plot is off the wall for the first few levels, but toward the middle of the game, I started to wonder whether things were becoming less crazy, or if I was just becoming numb to all the Dadaist non-sequiturs that were being thrown out.

In the end, I decided the writers tried too hard to make sense out of the whole thing. The plot's something about an ancient group of witches fighting with the biblical Heaven and a bunch of sages, and something about eyes or whatever. The game has a surprising number of cut-scenes, and outside of Hideo Kojima-esque buffoonery, I would never begrudge a game for them. However, the unnecessary exposition and constant flashbacks seem at odds with the game's otherwise nonchalant approach to logic and reason.

Another bone to pick: the boss fights. Critic Trent Fingland made an excellent analogy on how uninvolving the epic, screen-filling bosses can feel. To him, they felt like scoldings or lectures from someone bigger than you. In contrast, battles with enemies who have skill sets similar to your character can feel like a well-fought argument, where the enemy engages and reacts to you, instead of relying on patterns that can be learned and worn out. The game's secondary character Jeanne provides much of these "argument" battles. Easily the game's highlight, these fights are among the best animated and most visually intense gaming has offered. Unfortunately, they're too few and far between. Even worse, the best fight against her is directly after the tiresome "Space Harrier" segment.

Take away some of its flaws, and the bar would've been raised higher than most games could ever hope to surpass. In lieu of that, we have Kamiya's latest, a breakneck, top-tier example of the 3-D action brawler. It's currently the one to beat, and that does include Kratos and co.

Life, for Bayonetta, is a cabaret, my friends. Let's consider ourselves lucky we get to watch (and play) along.Rating: 8.5 out of 10

Disclosures: This game was obtained via retail store and reviewed on the Xbox 360. Approximately 40 hours of play were devoted to the game, including complete run-throughs of the game's second playable character.

Parents: According to the ESRB, this game contains blood and gore, intense violence, partial nudity, strong language and suggestive themes. The game features rampant sexual innuendo, but no full-frontal nudity. Some of the main character's attacks are influenced by bondage culture, which is extremely violent.

Deaf & Hard of Hearing: Audio cues are necessary to avoid attacks in the game. This is somewhat alleviated by the game's easier difficulty levels, where the player would dodge attacks, and counterattack by pressing a single button. Subtitles are provided for cut-scenes, and there is little to no in-game dialogue.

[quote=Gene Park]In contrast, battles with enemies who have skill sets similar to your character can feel like a well-fought argument, where the enemy engages and reacts to you, instead of relying on patterns that can be learned and worn out.[/quote]

That’s a good analogy. I also fully agree about the large-scale bosses. I’ve found that very few games can pull those off well, including my short time with the Bayonetta demo.

Agreed on the comments about the lipservice. It seems many of those who could offer real insight into the character and world of Bayonetta have pre-judged the content and haven’t bothered to play it, which is a shame.

Also your suggestion that the game’s pulling-of-punches renders it thematically challenged is some real food for thought. I’ll have to chew on that one for a while.

[quote=RandomRob]I think alot of lipservice is getting paid to this game being a masturbatory gravure-fest, mostly by people who haven’t played the game. If anything, Bayonetta is so PC about not rocking the boat that it comes off as thematically-challenged. I wanted this game to be WAYYY more over the top and tongue in cheek than it was. I wanted the gameplay to be more diverse, and it wasn’t. 9 hours in I was seriously not interested in the game at all and the space harrier segment was the nail in the coffin.[/quote] The developers were probably scared that it’d… Read more »

“I am an old man now (relatively speaking) and anything that reinforces the stereotype of gamers as single, pubescent losers turns me right off.” Fair point. It’s a shame that what you say actually applies to Bayonetta, since otherwise, as a game, it’s pretty solid. It’s weird because where-as some games do something good to highlight why gaming should sit alongside films and music, they typically do something else that ruins the momentum and keeps it grounded. Heavy Rain, another recent example, attempts to offer cutting-edge and authentic story-telling, but is subsequently pushed back into place due to plot-holes, bad… Read more »

I am an old man now (relatively speaking) and anything that reinforces the stereotype of gamers as single, pubescent losers turns me right off.

Not sure femininity and Bayonetta belong in the same webpage, either.

I think alot of lipservice is getting paid to this game being a masturbatory gravure-fest, mostly by people who haven’t played the game. If anything, Bayonetta is so PC about not rocking the boat that it comes off as thematically-challenged. I wanted this game to be WAYYY more over the top and tongue in cheek than it was. I wanted the gameplay to be more diverse, and it wasn’t. 9 hours in I was seriously not interested in the game at all and the space harrier segment was the nail in the coffin.

and I put 9 hours into Bayonetta and didnt see where this game as meant to be some sort of masturbatory gravure movie w/game sections. It’s a solid arcade game, but it wasn’t nearly as campy and irreverent as it should have been (I agree with the writer that the designers seemed hellbent on making everything make “sense” for no conceivable reason), and the gameplay reallllly repetitious, with those repetitions only magnified massively by the long load times (even patched) on the PS3. I’d like to try it on the 360.