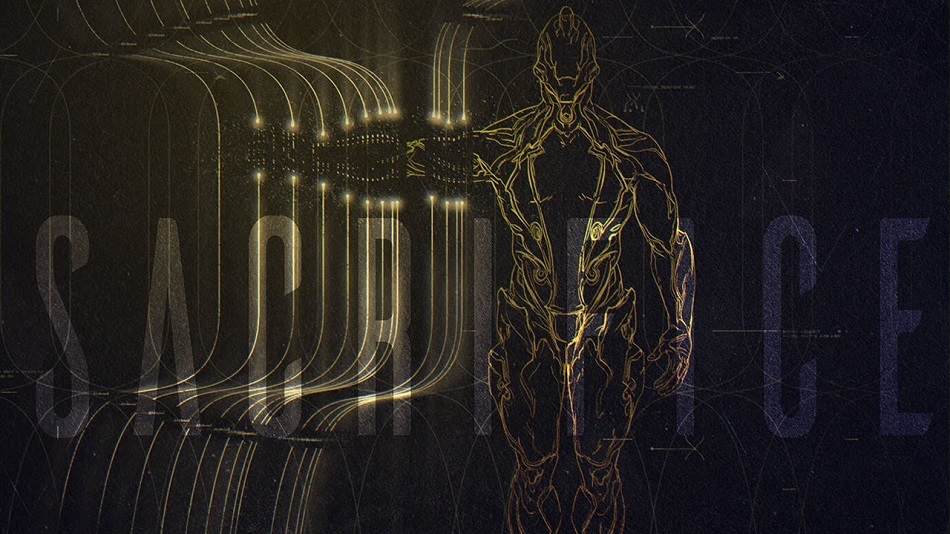 This article will be discussing the events of The Sacrifice’s story in detail. In order to avoid spoilers, we have placed all narrative content at the end of this article, preceded by another warning. Players who have not completed the Natah, Second Dream, War Within, Chains of Harrow, Octavia’s Anthem, and Apostasy Prologue quests should avoid this information.

The developers played a thirty minute demo of Fortuna on the Tennocon stage and showed the titular town area, which is a grungy underground bunker filled with neon and scrap. Up above on Venus’ surface, battles rage between opposing factions. Players will be able to zip between installations on brand-new hoverboards, or stop to track native monsters. They showed off a system of hunting where the player imitates an animal’s call to lure it close, then trap it for rewards. These are all exciting and fresh mechanics, but the real star was revealed at the very end — the players board a four-person craft and fly through the clouds to fight in space. 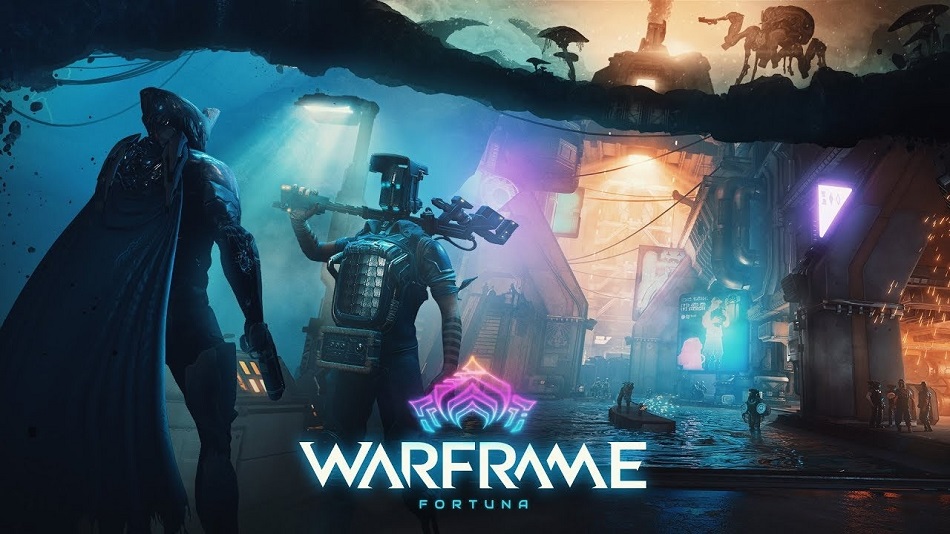 In an explosive eight-minute firefight, the Warframe team showed off their new ship-to-ship combat mission type. The devs manned navigation, gunnery, and hacking stations to deploy various weapons against the enemy fleet. With Interceptors swarming, boarding parties trading back and forth, and fire breaking out on both ships, it was absolute chaos!

To end the fight, they sent a team member onboard the enemy ship to paint a locator on its reactor for the finishing artillery fire. Of course, there was a dramatic “run out of the exploding ship” part at the end. If this all sounds like a lot of action at once, you’re right — it looked frenetic and challenging in an exciting way. Warframe fans across the world started clamoring immediately for the Fortuna update after the conference.

This latest story quest and the new upcoming content for Warframe exemplifies what makes Digital Extremes special. MMOs overrun the modern games market, varying wildly in quality. What sets Warframe apart? This team keeps exercising a shocking level of creativity in expanding their world. Fortuna breaks the the game’s own rules and gives veterans and new players alike exciting new experiences — Warframe evolves into a better experience every day!

Want to see the Fortuna demo from Tennocon? Click here!

Just want to see the ship combat? That’s cool too. click here instead!

SPOILER WARNING: STORY CONTENT FOUND IN “THE SACRIFICE” BELOW 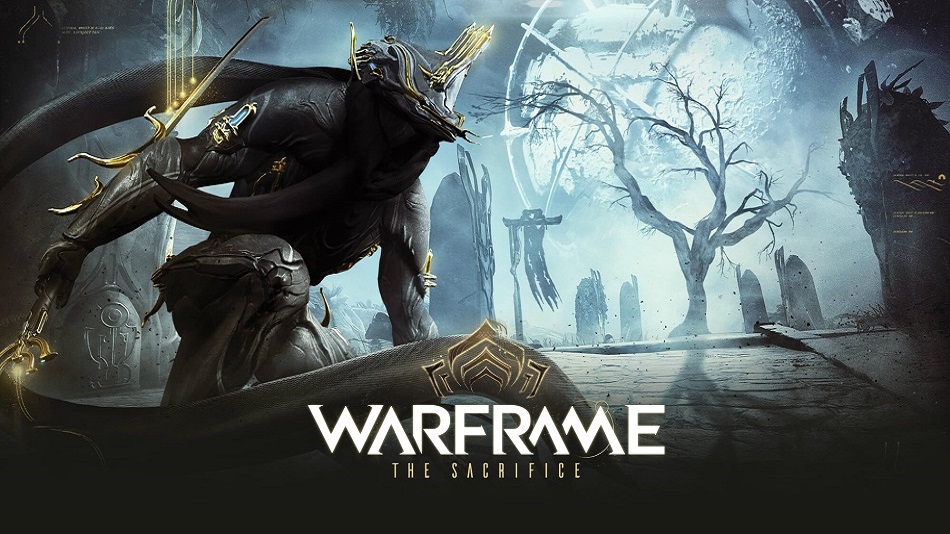 The Sacrifice starts with a vision of the new Warframe, Umbra. He’s fighting Ballas, the Orokin who stole the Lotus away in the last story quest. A huge, unknown Sentient appears, destroying Umbra instantly. Desperate for any clues about Ballas’ whereabouts, your Operator tracks the Frame’s remains to Lua.

Several surprises wait for you on the moon, including an ancient Orokin holding cell and a whole new puzzle minigame. There’s also one new enemy type, the Mimic. These Sentients take the shape of objects in the environment and pop out to attack when you get too close.

Eventually in the holding cell you find an artifact, a record of times before the Old War. It contains the secrets of the Warframes’ creation.

Pushed to the brink of extinction by the threat of the Sentients, the Orokin got desperate. We’ve learned before that Sentient can commandeer any advanced technology they face. So, they bent the Infested to their purposes and created specialized strains of the virus. Orokin citizens were exposed, and the resultant mutation twisted them into bizarre, hardened creatures of steel. More flesh and bone than circuits, these monsters could fight the Sentient. They eventually came to be known as Warframes. All this information is awarded to you throughout the quest in bits in between missions. All the while, you continue tracking Umbra.

Eventually you find the data to reconstruct Umbra’s body. You craft him on your forge like any other frame, and equip it in search of answers. Shockingly, he breaks free of control (within the UI of the game) and attacks your character. 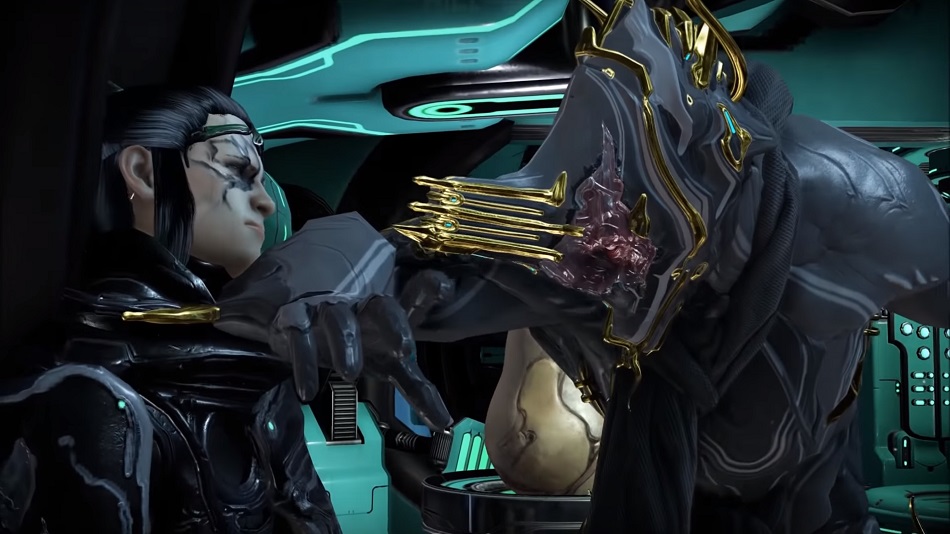 Your operator tries to gain control, forcing your way into his mind. You catch a glimpse of Umbra’s memories and then he flees. You chase Umbra across several missions to make contact again. After each battle you’ll get a continuation of the same memory, Umbra’s last human moments.

Umbra’s flashback shows a tense scene with Ballas, a paralyzed Umbra, and his son. The Orokin plays at friendship outwardly for the son, all the while whispering evil to you. Each time you get another flashback, the scenery gets subtly more twisted, more infested. 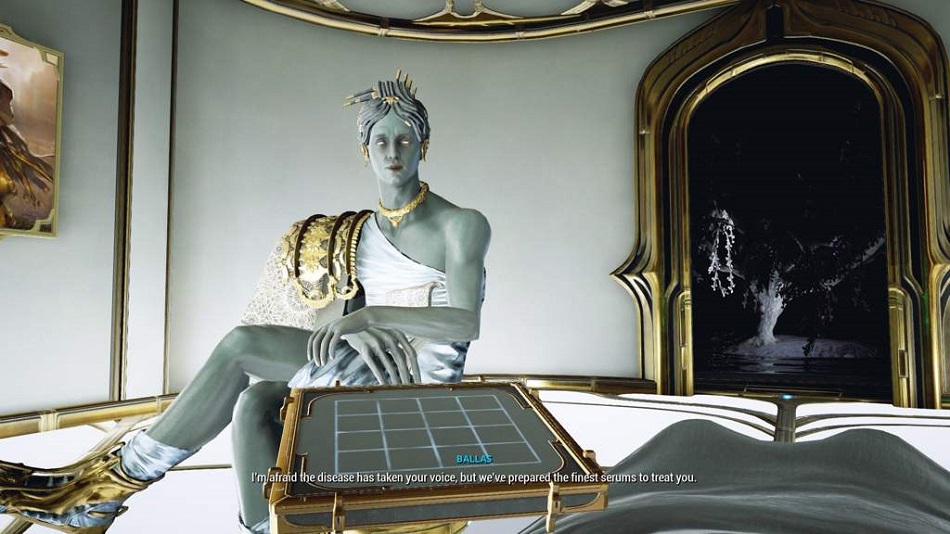 After the final present-day battle against the Frame, you get the last memory. His humanity fully consumed by the Infestation, Umbra murders his own son — Ballas’ plan.  As you dive further into Umbra’s mind, the Operator reaches out and soothes the guilt over taking his son’s life. After this, you manage to finally take control of the Frame. Time to take revenge. 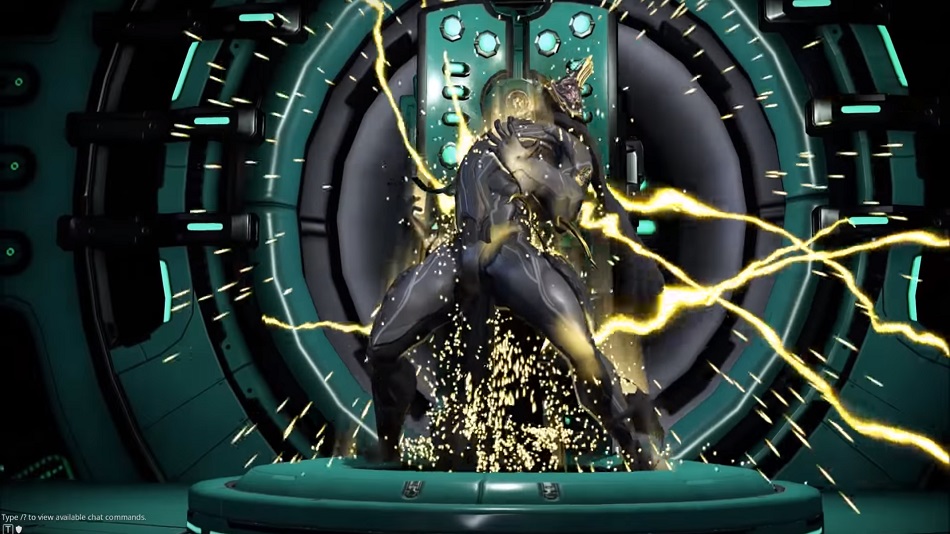 The final fight takes you to Earth for a showdown with Ballas. Excalibur Umbra is similar to the normal model, but with additional anti-Sentient powers and one big difference. If you step out of the Frame as your Operator, Umbra will fight with you at the same time! The two of you team up to take down Ballas’ Sentients and ultimately the Orokin himself. As Ballas bleeds out, the giant Sentient from the intro appears again. The camera pans to reveal this monstrosity is the Lotus! She pulls Ballas to safety, and flies off into the sky.

That concludes the Sacrifice quest. This cliffhanger leaves more questions than answers. Fleshing out the Warframes’ & Ballas’ past ties up some loose ends from the lore, and the rule breaking and unique mechanics in these story quests are always a delight — the scene where Umbra breaks out of the player’s control to attack you is a prime example. It takes a safe zone and turns it upside down. We’re meant to feel unsettled and lost, a goal The Sacrifice knocks out of the park.