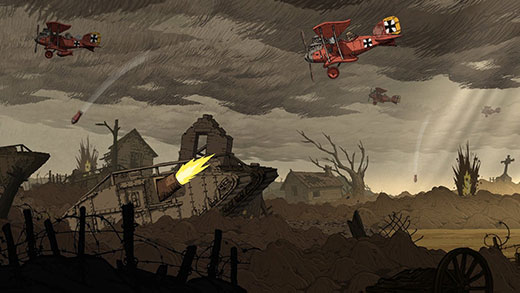 HIGH Bringing down a German zeppelin on the roof of a bombed-out cathedral.

LOW An anticlimactic escape from a P.O.W. camp.

War is profitable for the video game industry. The Call of Duty and Battlefield franchises earn hundreds of millions in sales each year, inspiring others to replicate this success with their own “realistic” warfare games. Many of these titles, however, do not justify the commercial success they’ve garnered.  The majority fail in their narratives, and studios aren’t interested in examining the grievances that drive people to take up arms against another nation, the trauma endured by soldiers in brutal conditions, or the reality of innocent civilians caught in the crossfire. Ubisoft Montpellier is the rare studio that approaches war in a mature, serious manner with Valiant Hearts

. It’s a game which not only focuses on a period few others touch, but conveys the horror, heartache and hope of that time in a way few others could.

On June 28, 1914, Archduke Franz Ferdinand of Austria was assassinated by a Yugoslav nationalist. This murder was the event that began World War I, and millions of lives were torn apart. Valiant Hearts is set during this real-world period and features four individuals brought together in the wake of the chaos. Emile is a French farmer called into service. His German son-in-law Karl is forcibly deported to fight for the other side. Freddie is an American expatriate who joined the French Foreign Legion, and Anna is a Belgian medic. As their paths are connected by fate, their strength and sanity will be pushed to the limit as they fight for survival.

Interestingly, none of the characters take up arms against others. The team at Ubisoft Montpellier felt that if players could kill, it would sever the bond between them and the protagonists, as well as conflict with their intended message. So, rather than becoming another fast-paced shooter, Valiant Hearts is instead a side-scrolling adventure game.

Much of the gameplay involves locating a specific object necessary to complete a task or move to the next link in a chain of events (obtaining every part of a superior officer’s uniform, bringing water to an injured soldier, etc.) Characters can only carry one object at any given time, so tracking down all the items needed to progress can involve going back and forth between some areas repeatedly, but since the levels are all fairly small it never becomes a chore. The majority of the puzzles fit into the environments organically, and suit the time period and current situation rather than simply being arbitrary tests of abstract logic.

Since the player characters are prohibited from killing others and they die after only one hit, the action in Valiant Hearts is based around survival. Dodging enemy fire, escaping from burning buildings before the smoke becomes deadly, and using a mortar cannon to destroy tanks are just a few of the trials players will endure as they fight to stay alive. These sequences aren’t incredibly challenging, but they do require quick reaction times and accuracy, which can be difficult to pull off in some of the more demanding situations. I found this out in a section where I had to toss grenades through the wreckage of a building, angling them so they bounced off walls and landed on a tank during the moments when its hatches were open. There are also some auto-scrolling segments where players constantly run or drive while dodging gunfire, shells, and land mines. They’re short and simple, but they create tension incredibly well.

The gameplay I’ve described satisfies, but it’s really the narrative that makes Valiant Hearts stand out.

Aside from occasional expository narration, there’s no spoken dialogue. Instead, the game relies on its locations and non-verbal interactions to convey the intended emotions, and it succeeds.  Neither the Allied or Central powers are portrayed as completely monstrous or noble. The characters aren’t invulnerable killing machines powered by patriotism, but ordinary people drawn into the war by forces beyond their control. The player sees how combat affects them first hand—their disgust at the brutality seen on a daily basis, living with a constant fear that they will die on the front line, holding out hope that they will survive so they can return to their old lives and loved ones. It brings a sense of realism that most other military games marketed as “realistic” never come close to achieving.

Joyful and somber moments are effectively balanced by shifting between the perspectives of each central character as necessary. During the introduction I watched as Karl was forced by the gendarmes to leave France while his family tearfully looked on as he departed.  When Emile is drafted, the tone is romanticized; the soldiers are so confident they’ll triumph against the Germans that they drink and cavort. Once on the field, however, the unit is all but wiped out by an endless rain of bullets and mortars.

Admittedly there are a few clichés that have their emotional impact diminished due to overuse—most notably cliffhangers which suggest a character was killed only to have them show up alive and well later. Other events are predictable because they were the simplest way to achieve dramatic irony, as seen when it transpires that Karl was present at the battle where his father-in-law was taken prisoner.

Another quality that makes Valiant Hearts so rare among military-themed games is how it doesn’t shy away from depicting the horrors of war that both soldiers and civilians are subjected to. Battlefields are littered with mounds of corpses, and medics carry off the dying in droves. Families grieve in the aftermath of a bombing, mourning their loved ones crushed under rubble. Chapter segments are introduced with a brusque declaration of the atrocities currently taking place—such as the first use of chemical weapons—and are accompanied by a still image or brief animation. Without context this narration would be nothing more than a bridge between sections of gameplay, but instead it reinforces the weight and severity of the action on screen.

For all the death and destruction, and the display of humanity at its most brutal, there is still a sense of hope. The protagonists aren’t killers; they’re ordinary people sickened by the suffering around them and desperate for the war to end. Until that day comes, though, they’re willing to fight death rather than cause more. It’s truly inspiring. I desperately wanted each of the characters to survive to the end simply because they deserved peace and happiness after all they endured.

is the very antithesis of the generic, mindless, testosterone-laden military games that dominate the market.   While it can be completed in less than six hours, it perfectly explores themes and concepts that triple-A titles still have difficulty grasping: gray morality, a poignant, thought-provoking storyline, and appealing gameplay that isn’t based on killing everything in sight. There’s no denying it has some flaws that keep it from being greater, but it’s still one of the best downloadable games of 2014. I recommend it to anyone who enjoys puzzles, is interested in the history of World War I, or is simply looking for a game that knows how to be truly mature without wallowing in sex and violence. Rating: 8.5 out of 10


Disclosures: This game was obtained via paid download and reviewed on the PS4. Approximately 6 hours of play were devoted to the single-player mode, and the game was completed. There are no multiplayer modes.

Parents: According to the ESRB, this game contains violence, blood, and use of alcohol and tobacco. Soldiers are seen getting shot, stabbed, and caught in explosions. Their pained expressions make it clear that they’re dying in agony. Seeing corpses piling up on the battlefield drives the point home even more. Even with the cartoonish art style, this isn’t a game for kids or the squeamish.

Deaf & Hard of Hearing: Subtitles are provided, and any potential dangers are accompanied by both visual and audio cues, so players who are deaf or hard of hearing won’t have any problems completing the game.

The game is on sale so I came here for a recommendation, and the commentator above successfully turned me off to this game.

There is a recent push among one faction of people who play video games to decry violence, yet I don’t see how you get away with a World War I game without depicting extreme violence. A lot of people died, and while the popular first-person-shooters don’t necessarily honor them with their Jerry Bruckheimer set pieces and press F to salute nonsense, going to the opposite extreme doesn’t honor them either.

All that being said, gameplay is definitely not its strong point so do bear that in mind.

At least the Save Game functionality works correctly, something The Walking Dead didn’t manage 😉

I’d recommend the game; it’s not a shooter, it’s a puzzle platformer, so maybe the comments about violence make more sense in that context. There is plenty of killing going on.

It has it’s flaws, plenty of them. But if it looks interesting to you, doesn’t a sale let you try it at low risk? I think it’s worth a go, even if you hate it. It’s different enough and good looking enough to deserve that.

I bought this game on a recommendation. This game is not a game. It’s an interactive movie. You don’t really make decisions, you’re never in control of the narrative. And yes, about 40% of your playtime will be watching rather than interacting. Do you like the Walking Dead games? This is the same thing, just a more cartoony art style. The style of this game doesn’t offend me, per se. On-the-rails games can succeed. Portal suffers no input or deviation from the player, but that game flows around you. Control of your character is rarely taken from you. In Valiant… Read more »