New York, New York… It’s A Hell Of A Town 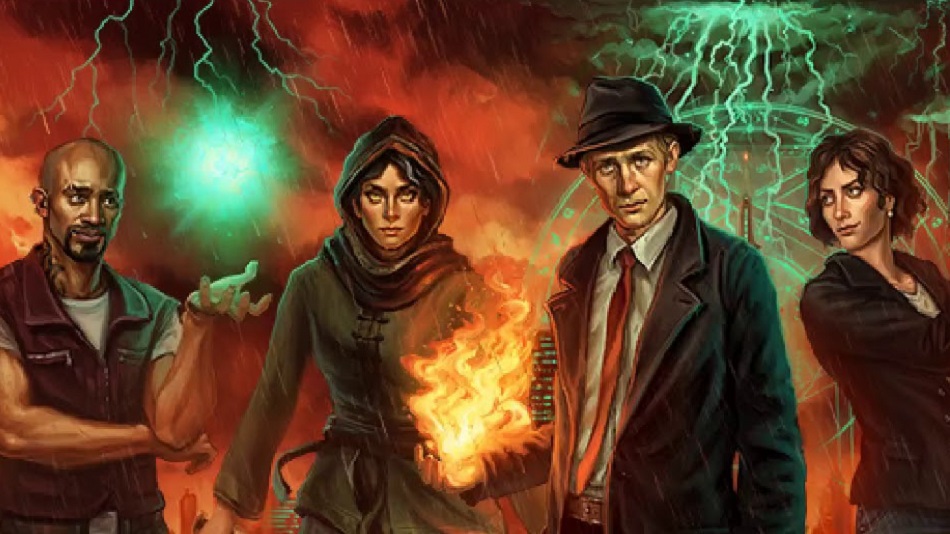 LOW A little too much backtracking. Some puzzle logic didn’t mesh.

WTF What do Mandana and Eli do for day jobs?

I’ve loved every title that Wadjet Eye Games has produced or published, but only Unavowed made me immediately restart after my initial completion (this time with the developer commentary on) simply because I couldn’t bear to leave the remarkable world they’d created. From its incredibly well-rounded characters to its gorgeous art design, storytelling, and (mostly) enjoyable puzzles, Unavowed is a stunning achievement.

Unavowed generally plays like a standard point-and-click adventure except that the player is required to choose a party of two companion characters from a potential pool of four.  These companions bring unique abilities to each mission, and they’re ‘used’ like any other inventory item to manipulate objects and/or solve puzzles as the story unfolds. Cleverly, puzzles offer multiple solutions depending on which companions are available at any time, meaning that it’s impossible to be in an unwinnable situation because the ‘wrong’ group came on a mission, although some characters must be present or some locations revisited in order to properly propel the story forward.

Taking cues from role-playing titles, Unavowed begins by allowing the player to select one of three backstories (along with male and female variants) which sets the rest of the plot in motion and provides context for why the protagonist has attracted the attention of the Unavowed — a secret society tasked with defending New York from supernatural threats. 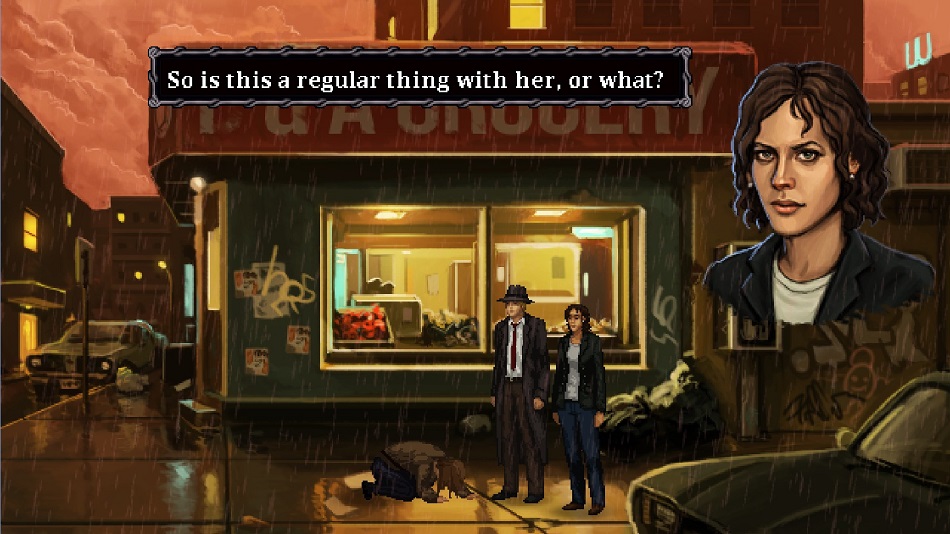 As things begin, the player is possessed by a demon. After it’s exorcised, the Unavowed decide to accept the player into their ranks to determine exactly what the demon was after. The player will initially team up with Mandana, a half-jinn, half pirate-queen master of swordplay and Eli, former accountant turned powerful fire mage.  As they explore the city trying to stop the ever-increasing forces of evil, two more will join the cause. First is Vicki, a disgraced detective. Logan is a former alcoholic and current “bestower” who can speak with the dead. (Fans of the Blackwell series will spot this reference as well as numerous other callbacks and cameos.)

Despite their disparate origins, the four companion characters have tremendous chemistry together which is emphasized by clever dialogue and character-specific banter during quieter moments. It’s so good, in fact, that I look forward to replaying with new combinations of characters just to hear more side chatter. Stellar voice acting, a hallmark of Wadjet Eye titles further brings these characters to life.  Logan Cunningham (Bastion) as Logan, Arielle Siegel (Shardlight) as Vicki, Frank Todaro (Transformers and Technobabylon) as Eli, and Sandra Espinoza (Primordia) as Mandana bring equal parts humor and world-weariness to their roles, making them all the more relatable.  Secondary characters are similarly well-written and cast, drawing players in and helping to suspend disbelief, even when encountering mer-men, dragons, and assorted evil spirits.

Unavowed’s New York City is as much as a character as any of the others walking (or floating) around. Dave Gilbert’s design and Ben Chandler’s art makes locations feel familiar, even though the player’s never set foot there. Combined with a strong soundtrack and equally effective sound design, players can almost smell food cooking on Mott in Chinatown, or feel real apprehension as a blood red sky boils overhead in the Bronx.  Equally impressive are the character sprites for both human and non-human entities.  Costumes are realistic and well-animated, and fantastic creatures absolutely dominate the screen. 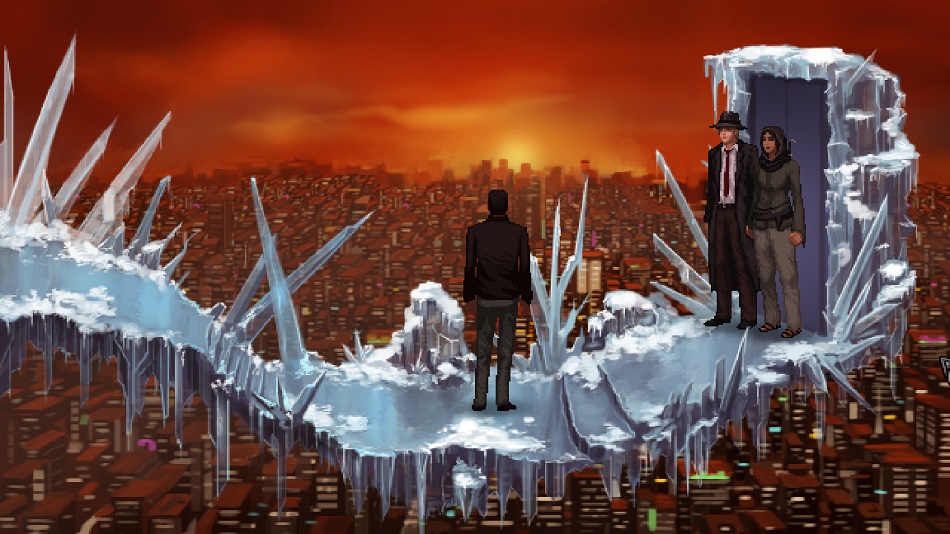 The plot goes through numerous twists and turns, including several moments I never saw coming — I audibly gasped during especially tense or surprising reveals.  The script also provided welcome moments of comic relief, and I cheered aloud (something I never do) when an old friend from a previous Wadjet Eye adventure made a return, and was playable to boot!

In order to avoid plot spoilers, it’s difficult to talk about the story in anything other than generalities. However, the puzzles are well-thought-out and follow generally consistent internal logic. That said, it’s sometimes difficult to remember that companions are just as likely to be involved in the solution as any other piece of inventory, and that multiple companions are sometimes the key to tricky situations. Otherwise, Unavowed doesn’t rely on too many “game logic” solutions, and most of the non-standard brain teasers have a good reason for being there, like passwords for computers or combination locks, for example.

There is a degree of backtracking necessary during play, but it’s only annoying in one mission where the game’s logic just didn’t track for me. It’s not always obvious when portable items and background items need to be used together — any item that can be used really ought to be able to be carried, rather than requiring me to retrace my steps so I could compare two things.  Similarly, some dialogue choices are not available until certain item combinations are used, which is frustrating when the solution to a puzzle is otherwise readily determined.  Such issues are infrequent, though.

Despite the minor flaws described above, Unavowed is truly something special, and it deserves every accolade it’s about to receive.  I honestly can’t remember being as drawn into an adventure game as I was during this one, and the time just flew by.  Simply put, Wadjet Eye’s newest title should be in every gamer’s library as soon as possible. Rating: 9 out of 10

Disclosures: This game is developed and published by Wadjet Eye Games.  It is currently available on the PC. This copy of the game was obtained via publisher and reviewed on the PC. Approximately 10 hours of play were devoted to the single-player mode, and the game was completed.  There are no multiplayer modes.

Parents: There is no official ESRB rating for this game.  However, the game contains Graphic Violence, Blood and Gore, Strong Language, as well as Use of Alcohol.   The game features several graphic murders as well as depictions of post-murder crime scenes.  The language is sometimes severe; as “sh*t” and “f*ck” appear in dialogue.  The game also deals with occult and supernatural elements.

Deaf & Hard of Hearing Gamers:  The game offers full subtitles for all spoken dialogue except for occasional ambient dialogue (such as an overhead subway announcement) that has no bearing on the narrative.  Audio cues have visual components.  Subtitles cannot be resized, and there are no alternate font/color choices available. 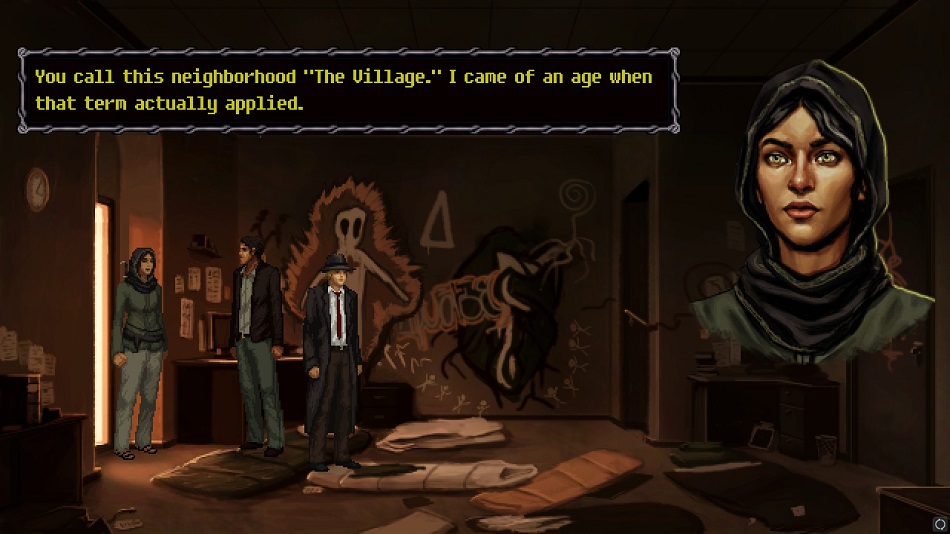 Remappable Controls: No, this game’s controls are not remappable. The mouse pointer is used to select characters, locations, points of interest, and inventory based on placement location and the left mouse button. 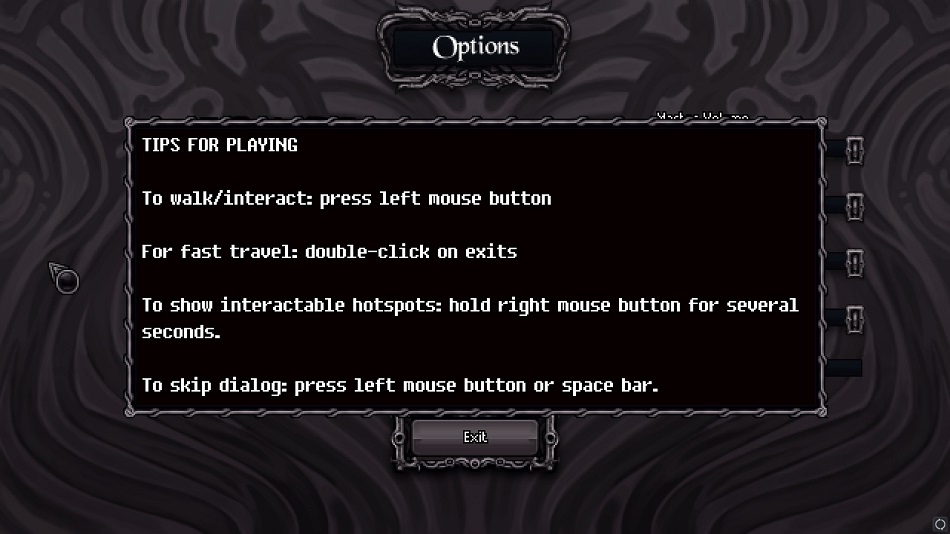