I Miss Me Dreadfully! 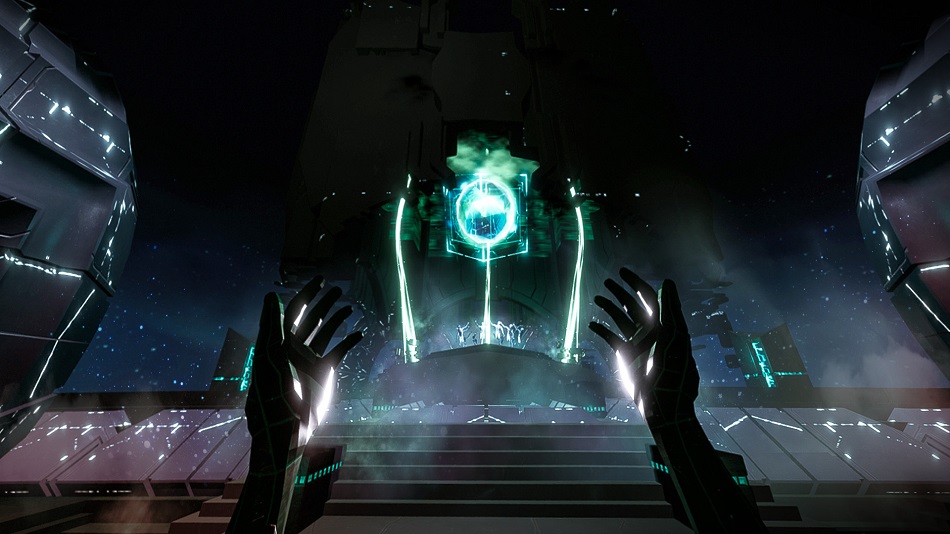 WTF Ripping out my own heart to satisfy my own impatience.

Virtual reality developers are have figured out a wonderful secret.  While VR has obvious potential for first-person immersion, third-person VR adventures like Moss and Astro Bot have charmed even the most jaded critics with an enhanced ability to establish a bond between player and character. However, I never would have thought that the next step in the evolution of virtual reality’s promise would arrive so quickly —  and with Transpose, I get the feeling that developers Secret Location didn’t either. Transpose goes beyond connecting me with virtual characters… Transpose has forced me to connect with myself.

Fair warning — it’s hard to write about Transpose without coming across as utterly pretentious, but I’ll do my best.

In the past few years, I’ve dabbled with meditation and the philosophy surrounding it.  I’ve run across a handful of ideas that have been intellectual carrots on a stick in my pursuit of mindfulness, but one of the most salient ideas I’ve heard is the idea of treating your future self with compassion.  The idea always sounded nice, but in Transpose, I was able to actively put it into practice.

Transpose, in its most basic sense, is a first-person puzzler.  In it, I existed in a dying mechanical science fiction land with infinite landscapes and floating metal blocks.  It was my responsibility to restart this world by taking cubes and placing them in a ‘goal’ box in order to help restart the world. The twist existed in my ability to record my behaviors in the form of “echoes,” and then interact with those recordings after respawning.  While manipulating time, I could also manipulate gravity by choosing where I spawned.  The concept is difficult to explain, but elegant in execution. 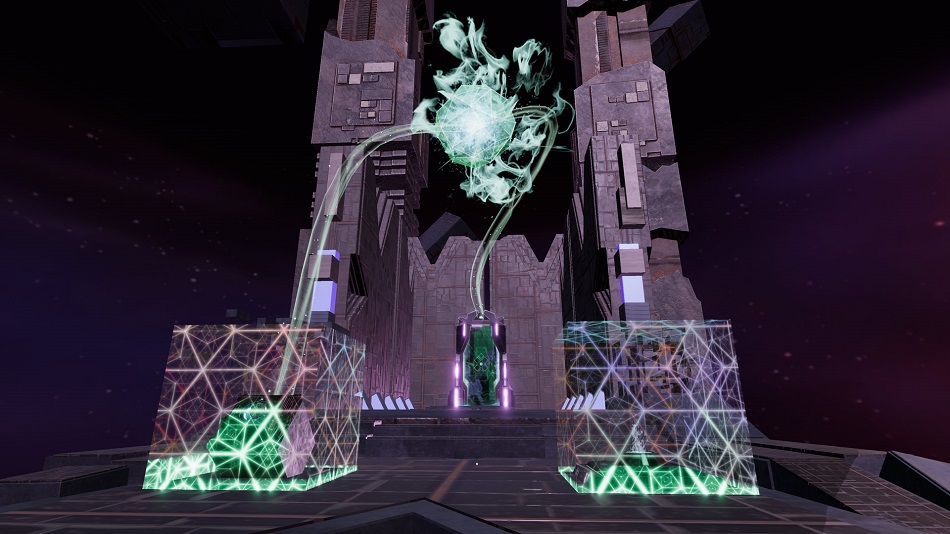 For example, one early puzzle had me spawn on a floating platform with a cube in front of me.  After grabbing the cube, I looked up and saw the goal box on the ceiling, along with another spawn point. The solution was to grab the cube and throw it up into the air so that it approached the ceiling. Then I stopped time and ‘kept’ my recording.  I then selected a ceiling spawn point, and began the level again.  While watching my prior echo (now upside-down) approach the cube, I positioned myself in the location where I previously threw the box.  With proper anticipation, I was able to catch the box from my former self and walk it into the goal, completing the level.

The combination of time manipulation and gravity manipulation made for puzzles that quickly became complex and challenging, but I never felt frustrated.  While I would start each level blundering about, flipping environment switches, and chucking blocks haphazardly, I would eventually succeed by taking a moment to pause and evaluate my role within each space.  By carefully thinking about my actions and interactions with myself, a clever solution would eventually fall into place.

The well-developed mechanics of gameplay, however, belie what I believe the real value of Transpose is, and it’s something I can’t imagine Secret Location had in mind — Transpose gave me an opportunity to observe, interact with, and accept myself. 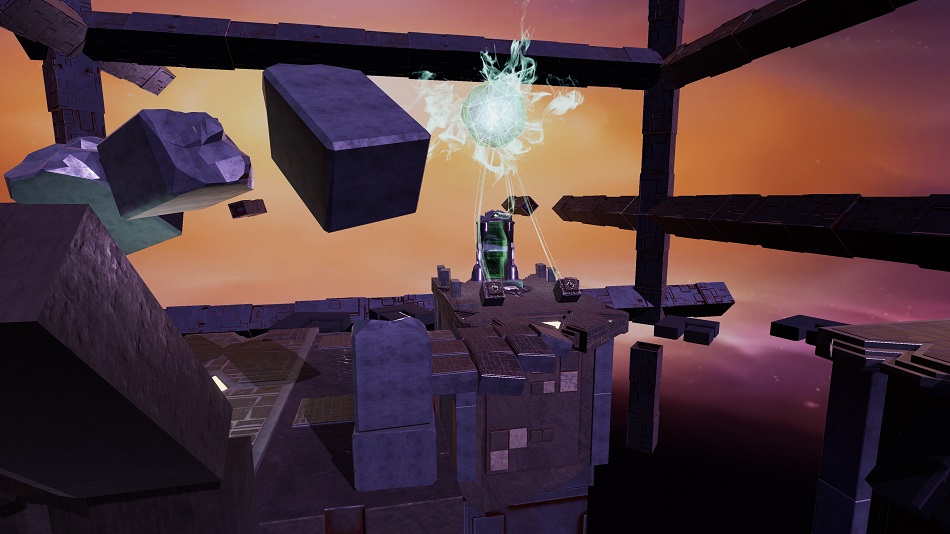 With every step, I’d consider how I might feel about that step in the future. Every time I watched my prior recordings, I’d learn a small degree of patience and humility.  It was a pleasure to watch myself adapt to changing environments and wield new rule-sets.  It was charming to complete a level, go to the beginning, and watch all of my prior selves walk around, gawk at the environment, and test out solutions.

In this context, the usual annoying quirks of VR became humanizing moments, such as when I watched my prior recording smack himself in the face with the controller while trying to readjust the headset after sneezing, or when I’d see myself fumbling around with (usually) responsive VR tracking.  Moments like this broke immersion, but they reminded me that the avatars I was watching weren’t just virtual constructs, but my actual self at an earlier time.  The past was just alive as the present, and the future was just as real as the past.

At face value, Transpose is a wonderful VR puzzle game that’s as entertaining as it is mind-boggling. However, on the mornings when I started my day with Transpose, I found myself possessed of a calmness and patience that I had difficulty characterizing.  As pretentious and hyperbolic as it sounds, the mindfulness and self-acceptance that it imbued in me made Secret Location’s work as transformative — it was an incredible experience to wave to myself, to give myself a high five, to rip my own heart out, or to stand beside myself while waiting longingly for another me. Rating: 9 out of 10

Disclosures: This game is developed and published by Secret Location. It is currently available on PSVR, Oculus Rift, and SteamVR. This copy of the game was obtained via publisher and reviewed on the PSVR. Approximately 8 hours of play were devoted to the single-player mode, and the game was completed. There are no multiplayer modes.

Parents: According to the ESRB, this game is rated E. There is no violence beyond ripping out the “core” at the heart of previous echoes in order to delete their effect.

Deaf & Hard of Hearing Gamers: There are no audio cues necessary for successful gameplay. All information is conveyed via text. The text cannot be resized. 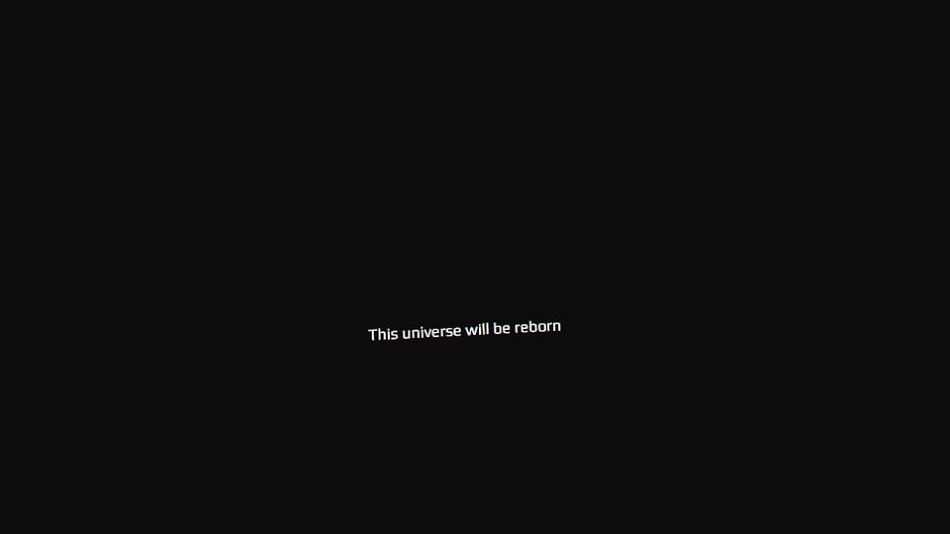 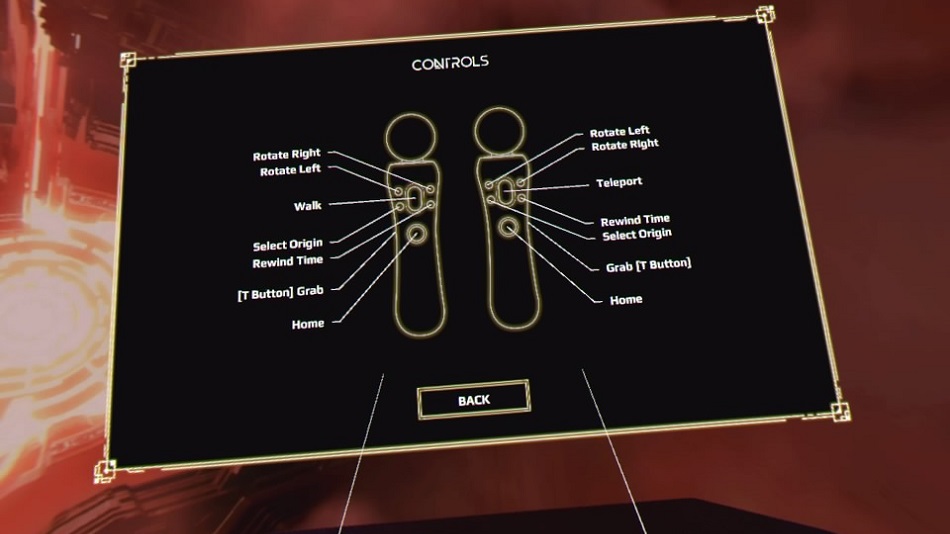