Attack on My Last Nerve 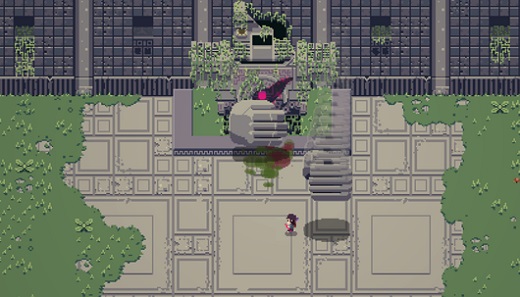 HIGH: Finally taking down a Titan on my 71st attempt.

WTF: Oh joy, another vague “artistic” ending that tries to be intelligent but says nothing profound.

Imitation will always be present in the world of entertainment. Whenever something unique and innovative resonates with the general public, it’s a certainty that others will try to copy the formula to share in some of that fame, for good (the birth of the grunge movement following Nirvana’s phenomenal success) and for ill (the glut of teenage paranormal romance in the wake of Twilight.) Video games are no exception to this phenomenon.

Titan Souls is an interesting specimen. Its name is clearly cribbing from the Demon’s Souls/Dark Souls franchise which has become a critical success by combining intense-yet-fair difficulty, bleak atmospheres, and fascinating worlds which gradually reveal their secrets to players diligent enough to keep pressing on through the pain. Playing Titan Souls also reveals that it borrows ideas from Shadow of the Colossus, clearly attempting to tell its own version of that tragic tale about the loss of humanity as desire begets obsession. Unfortunately, the final product suggests the developers had no real understanding of what made those other games work, resulting in theirs being an overall mess.

In Titan Souls, a nameless warrior has traveled to a mysterious land to obtain mystical power held by the beasts that inhabit this realm. (Sound familiar?) The young man encounters a variety of monsters to slay with an enchanted bow. Strangely, none of the Titans will attack unless provoked. Eventually he encounters a Titan capable of human speech who expresses pity for the protagonist, suggesting he is on a futile quest, and doesn’t even bother to defend itself before being slain.

These factors (among others) are apparently intended to set up a “The player character is the real monster!” moment, but it’s all so blatantly telegraphed and predictable that I doubt anyone would consider this “twist” shocking.

Aside from its superficial and lazy approach to ripping off Shadow of the Colossus, the narrative also fails to establish any sense of wonder about the game’s world. Far too much is left unanswered. Why exactly does the warrior need these souls—what calamity has occurred that only their power can resolve? How many have come to the sacred land before him? Where did the mystical bow the warrior wields come from, and why does the speaking Titan call it an abomination?

I can understand leaving some questions unanswered for the sake of mystique, but there’s too much that goes unexplained and it prevents me from becoming invested in the world. This isn’t minimalist storytelling, it’s incomplete storytelling. Not even defeating the true final boss, ironically dubbed “Truth,” reveals anything to shed light on the plot.

Gameplay is where Titan Souls attempts to emulate From Software’s hit series, and the game is painfully difficult. Conceived during a Ludum Dare game jam with the theme “You Only Get One,” the developers cooked up a prototype where the player dies after only one hit. Extending that concept, the Titans can also be killed with one shot to their weak points. 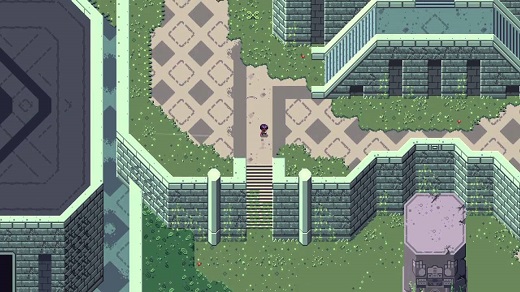 The player’s only weapon is a single arrow that must be summoned back to the quiver or physically picked up after being launched. It’s used quite cleverly in a few boss fights, but there’s a temporary delay between calling the arrow back and when it actually moves. If using a keyboard instead of a controller, it’s a bit harder to aim diagonally. Worse, some Titans are capable of jumping, and this vertical movement makes it difficult to judge whether they’re still on the same plane as the player, or if the arrow will sail under them. I think the concept would have worked better in a 3D setting, or at least, it would have resulted in fewer missed shots and less frustration.

Controls aside, almost every boss fight centers on exposing a Titan’s weak spot, but this is easier in theory than in practice. While a few Titans are stationary, most move quickly when attacking and they tend to recover almost as quickly after a rampage, leaving very little opportunity to get a shot in. Making things worse is the fact that the player cannot move while aiming, essentially leaving them an open target. This becomes more problematic when encountering a boss whose attack range covers a large area like the Plant and Skull Titans, or when facing a monster that can unleash a large number of projectile attacks like the Lava Blob and Mask Titans. It’s easy to die over and over by being overwhelmed with massive attacks or by the Titans’ speed. When this happens repeatedly, it’s likely to lead to a ragequit or a thrown controller.

The Titans’ rapid movements also make it difficult to get a handle on attack patterns, so most of my time was spent desperately dodging and hoping I could take a clear shot before the window of opportunity closed. Fellow reviewer Derek Alexander provided an apt assessment when he said that victory in Titan Souls isn’t satisfying because when the killing blow is finally delivered, it more often feels like luck than skill.

Aside from the boss fights there’s really nothing to do, and the game’s world is completely barren. There are some enigmatic features like cryptic hieroglyphics and skeletal remains of humongous beasts dotting the landscape, but they don’t provide substantial lore. These features appear to be there because other games like this have similar visual elements. Any secrets and puzzles (a hidden passage behind a mountain wall, a torch lighting puzzle, a simple forest maze) serve no purpose other than to open a path to more Titans. It’s unbelievably dull, and makes an unsatisfying journey feel even more pointless.

I welcome a challenge when I play games, but only if there’s a satisfying payoff for my struggles. Titan Souls strikes me as a time-wasting boss-rush that constantly tried my patience and delivered no enjoyable or profound climax—it just peters out and credits roll. Hardcore gamers looking for a test of skill should avoid Titan Souls, as there are better games out there to satisfy their urge for difficulty. And those players who aren’t in the market for masochism? There’s nothing for them here. Rating: 4.0 out of 10


Disclosure: This game was obtained from the publisher and played on the PC. Approximately 4 hours of play were devoted to the game, and it was completed once on normal difficulty. There is no multiplayer mode

Parents: This game is rated T by the ESRB for containing blood and violence, though the pixelated presentation will make it difficult to find any of the death scenes objectionable. Titan Souls is devoid of profanity, though I imagine several players will be swearing excessively after constantly dying to some of the more difficult bosses.

Deaf & Hard of Hearing: There is hardly any dialogue and the few lines of narration are provided with captions. Some of the boss fights, such as that against Knight Elhanan, do incorporate subtle audio cues as a hint for when to strike. Being unable to hear those cues can make the battles much more difficult than they already are.

It is quite bland, not just in visual style but in gameplay. I wouldn’t have been so harsh if the game had tried to do something original rather than rip off SotC, or if it hadn’t made the battles against the Titans so frustratingly difficult.

Quite a harsh review I must say. I think there are too many in the gaming press where a game gets a free pass if it has some artsy pixelated look. I’m not sure exactly why, but the look of Titan Souls doesn’t gel with me. It just looks a bit bland altogether.