Actually, This Is The Mafia 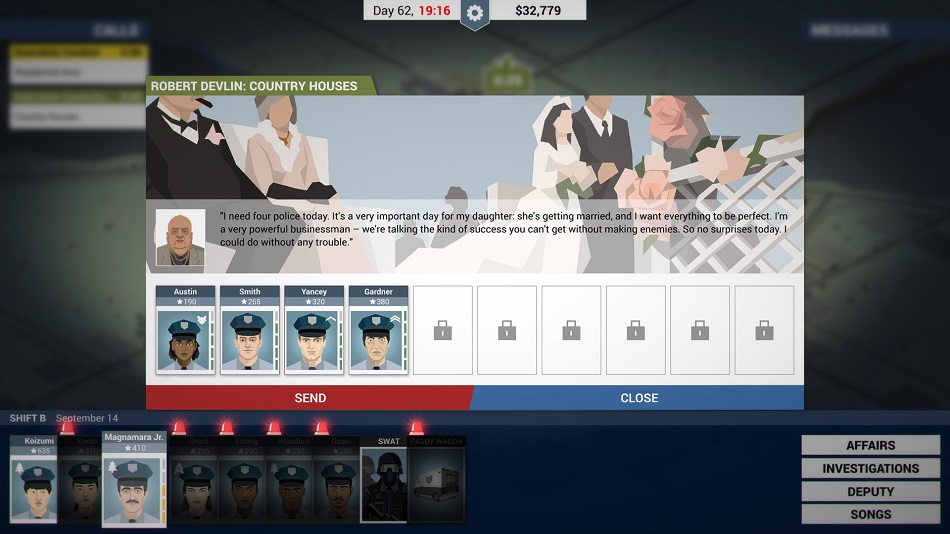 LOW No-win situations with no right answer and no recompense.

Usually, I’m a story person. I can excuse boring or outright bad gameplay if the plot keeps me going, but This Is The Police had me skipping through cutscenes in an effort to move it along. Why? Because in this particular case, the narrative had no bearing on the game itself.

As the game begins, players take on the role of an older cop named Jack Boyd. He’s on the cusp of retirement, being pushed out of his position as the chief of police, and told to stay out of trouble during the transition phase. He’s a pretty melancholy man, but his dialogue can be funny in places. A favorite quote comes from the start as he’s entering a strip club — “Usually, before I shake my tits in public, I like to see how the professionals do it.” It says a lot about the kind of guy Jack is.

This is the Police feels like it should be a story-heavy adventure game, but it plays like a strategy title. In fact, it felt like a simplified Risk-meets-L.A. Noire, and it was unfortunate that the plot ended up being so meaningless since it had the potential to be more — it just wasn’t compelling.

Moving through the cutscenes, the player learns about Jack’s life and how his world is falling apart. There are some decisions to be made during these sections, and players can do things like decide whether they’ll support the mafia to help bring in more money for retirement, or how to engage with some of the other characters, although these characters don’t show up outside of the cutscenes.

Each new day begins with newspaper headlines — mostly humorous, occasionally helpful — and then the player is thrust into menu-based decision-making at the police station. 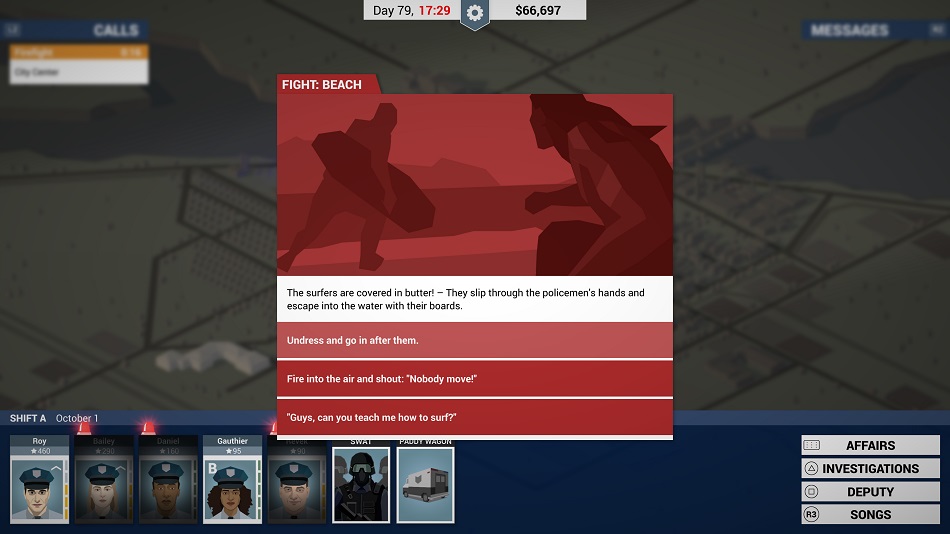 The first choices relate to promoting officers or detectives. Sometimes officers will call in sick and the player must decide whether to let them off, whether they should come in the next day, and so on. This was actually interesting since officers who skipped work could be fired later in the game, and giving out promotions could help some officers take the job more seriously. On the other hand, it might cause them to become arrogant and actually perform worse.

Afterwards, the player begins the meat of the work, which consists of officers and detectives overseeing the movements of figures throughout the city. Calls will come in concerning various crimes — suspicious figures, theft, murder, rape, burglary, suicide, and more. The player chooses which officers to send to which crime based on their stats, as well as whether or not to send SWAT, a paddy wagon, or other resources. Detectives play an especially interesting role as the player gets briefed on the investigations as they progress, making decisions and piecing together clues to solve crimes.

Each case brings back a report based on the number of officers sent to a call, their statistics, and the case itself. Success factors include whether the officers were injured, whether the suspects were apprehended, and whether civilians were injured. There are also opportunities where officers are ‘unsure’ and scenarios pop up for the player to make decisions, such as whether officers responding to a suicidal man on a bridge should approach the man, take out their gun, stand back and introduce themselves, and so on. These decisions play a crucial role in whether the mission is successful, but most of the time they were pretty obvious.

There’s a strong time management element to This Is The Police, as each call that comes in has a limited response window and is a certain distance away, so assigning officers properly on top of the other various decisions gives it a few nice layers of strategy. But, as stated earlier, the story of being a cop forced to retire has little to do with actually playing.

Some cases will involve the player’s relations with the mafia, and there’s a lot of behind-the-scenes management options, including paying them to kill officers to avoid having to fire them. There were also a few decisions during cutscenes that had some impact on what my options and goals were, but skipping through the narrative and picking arbitrarily didn’t seem to affect anything significant. In fact, it was easier to make decisions without the cutscenes because they were usually so dark — seeing this poor cop go through losing his job, his wife leaving him, having no retirement savings to fall back on, and so on had no bearing on what I was doing — it was just bleak.

Besides the story being superfluous, there were problems in the game design itself. I sometimes came across tasks that were literally impossible, like being given a time limit of six days to find gang members and then seeing no crimes occur during the next six days. Other times, crucial bits of information were displayed offscreen and rendered impossible to read. A little more polish would have smoothed things like these out.

Overall, This Is The Police is a somewhat enjoyable strategy/time management title, although the story felt like wasted time since I never grew connected to the characters or the plot, and it had no real bearing on play. With more weight given to the plot and better integration into the game overall, this sad tale of a man slowly sinking to the bottom would have come together into something fascinating. As it stands, the strategic parts can’t save the experience overall and the end result is a title that feels only half-done. Ultimately, This is the Police ended up being a game to kill time with, not one to lose time on. Rating: 4 out of 10

Disclosures: This game is developed by Weappy Studio and published by EuroVideo Medien GmbH, THQ Nordic, and EuroVideo Medin. It is currently available PS4, XBO, PC and Mac. This copy of the game was obtained via publisher and reviewed on the PS4. Approximately 6 hours of play were devoted to the single-player mode, and the game was not completed. There are no multiplayer modes.

Deaf & Hard of Hearing Gamers: The game’s dialogue was fully subtitled and I experienced no gameplay difficulties without sound.

Sound like quite a letdown. I always hate it when a game makes it appear as though your choices have significant bearing on what happens next, but then later it turns out the impact was minimal. Will give this one a pass.

Harsh, overall I’d give it a 6, I guess I enjoyed the story a little more than you did, but sometimes there was too much of a gap between story scenes it felt like a slog.

Also, I have the game on PS4 and it doesn’t seem to quite fit on the screen properly. What’s up with that?