The subject of this installment: Herald: An Interactive Period Drama, developed and published by Wispfire. 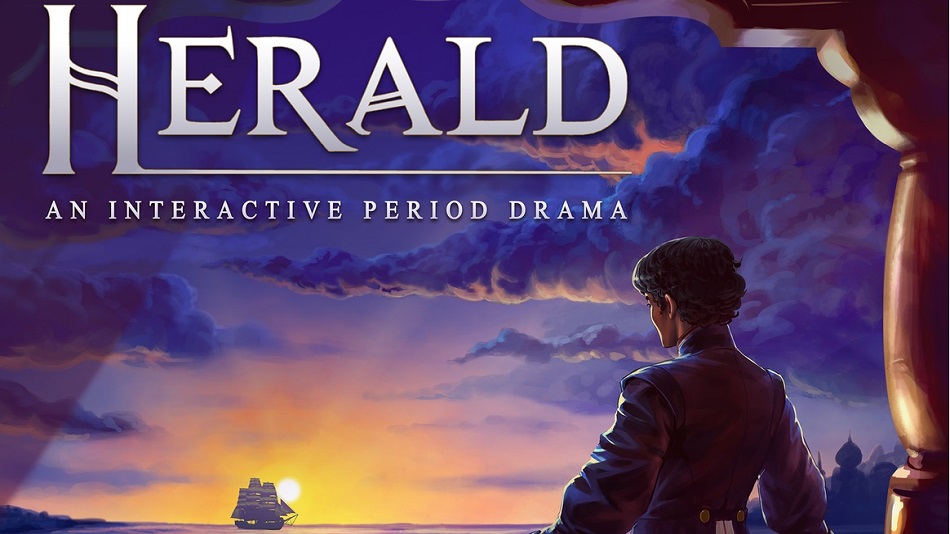 I come to my first TINAR with a bit of trepidation, but I think the cause is worthy.

When Brad sent me the game code for Herald: An Interactive Period Drama in early April, I was pretty excited. The visuals and initial startup reminded me of Liberty’s Kids, a game I couldn’t get enough of when I was little. That game allows the player to interact with historical events as an aspiring journalist, and the feel here is very similar—2D animations on the realistic-cartoony side, dialogue and conversation choices as the driving player action, and an opportunity to piece together bits of history by living it. Unfortunately Herald didn’t live up to my expectations and three months later, I’ve managed to rack up about an hour and a half of play time.

I’m not proud of this.

Before I get into the why, let’s talk about the what. Herald features Devan Rensburg, an up-and-coming young man aboard a ship with the aim of proving himself. The game is set in the 1800s (although not a real-world 1800s) and Devan is excited for the opportunity to learn more about his past and make a name for himself on board—a name that doesn’t involve things like “bastard.” The ship is sailing towards his birth country and he’s hoping to learn more about his origins. 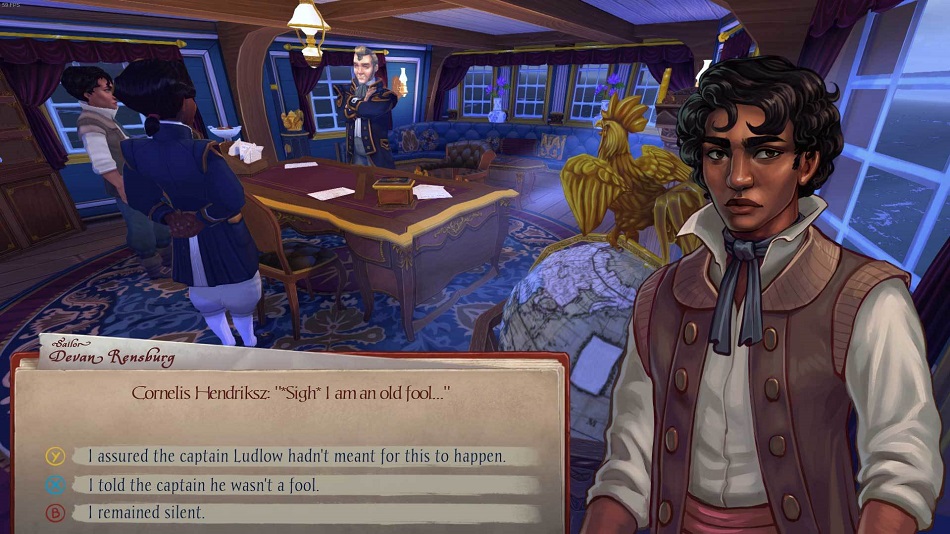 His background is more than a little fuzzy, but he’s not proud to talk about it. Aboard the boat he meets a variety of personalities including Ian, the cabin boy with a not-so-secret secret, Aaron, the second officer with a deeply unhealthy desire to carry his own firearms, and Undra, the chef with a soft spot for teaching stewards how to do their jobs and then giving them tasks that are well outside of it.

The game takes place, in part at least, as a sequence of stories narrated by the main character as he relates them under questioning from a mysterious woman simply called “The Rani.” Naturally antagonistic towards the cause with which Devan Rensburg has associated himself, she considers him “guilty until proven innocent,” and is extremely distrustful.

I was surprised to see that Herald allows far more interaction than I anticipated. Among other things, I managed to push a boy into suicide by discovering that he was possibly being sexually abused by a superior onboard. This came about in the course of pinning a man for illegal arms possessions… Or while delivering soup as a steward (a coveted position, I’m assured).

The animations in the game were astounding and it was beautiful to watch the way 2D character animations played against a vaguely 3D world. That being said, I would do almost anything to have had a ‘run’ or a ‘skip’ button. The literal movement of the game—that is, walking slowly across the ship’s deck—was much slower than other games I’ve played, even other click-to-move titles. And while the animations were adorable and the voice acting interesting, the pacing of dialogue was so slow that I found myself reading the subtitles and then trying to skip to the next section. Sometimes, this worked, but there didn’t seem to be any particular rhyme or reason to when dialogue was skippable and when it wasn’t. 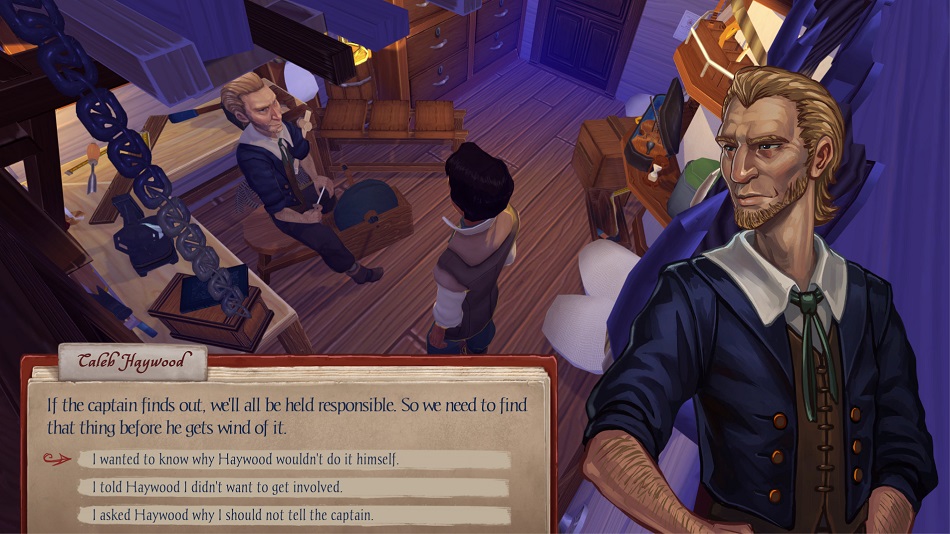 Now, onto the why.

I was able to move well into the first part of Herald despite only giving it a little time because the dialogue allowed me to skip through by reading it faster than it was being spoken, so I’d continue on to the next bit. However, this did get me into trouble when apparently ‘skip’ and ‘select the totally controversial conversation option’ turned out to be the same button. At one point, in an attempt to move through the dialogue faster, I evidently chose to insult the ship’s captain and very nearly commit insubordination. Needless to say, he was not too thrilled.

Regardless, even playing in ten-ish minute increments allowed me to make pretty good progress each time. The problem, then, wasn’t the fact that the game itself moved slow (although it did—I’m serious, a ‘run’ button would’ve been amazing) but the fact that the story moved slow. The pacing was off for me, and I felt like nothing was ever happening until all of a sudden I was making choices about characters I didn’t care about. The game moved in cycles, it seemed, where I was completing tasks and running errands on board and then suddenly everything that had been hinted at came together at once—a boy was about to jump overboard, a man was waving a gun, and another man was found guilty of assault. Except that because all of these plots had been built at the same time, I wasn’t sure which man was which.

Overall, it was the pacing that did the game in for me, but beyond that, Herald offers a pretty jarring experience thanks to mechanics, dialogue style, and animations reminiscent of a children’s game, but content themed around some pretty heavy adult topics like suicide, sexual assault, gun-rights, gun theft, and more were prominent early on. Other themes, like the main idea of a protagonist trying to uncover the truth of his controversial mixed heritage, seemed a bit more approachable for all ages.