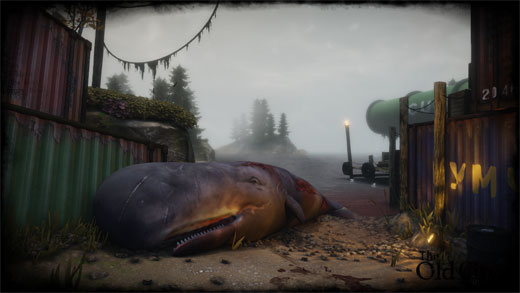 HIGH Some genuinely tense, unnerving moments in the first chapter.

LOW Everything after the first chapter

WTF An entire novella’s worth of backstory is included as optional collectibles.

Atmospheric exploration games have seen a surge in recent years. Drawing inspiration from classics like Myst, games in this genre attempt to deliver a sense of “wondering while wandering,” putting players into enigmatic worlds that gradually reveal their secrets the further the player goes.

The best of these titles pair clever, thought-provoking narratives with curious environments to truly engross the player. Gone Home, The Stanley Parable, Journey, Ether One and The Vanishing of Ethan Carter are several recent examples of how games in this genre are done correctly. Of course, if developers fail to engross players in the mysteries of their world, forcing them to travel from one point to another while subjecting them to trite pseudo-philosophical messages quickly becomes a tedious slog.

Regretfully, The Old City: Leviathan falls into this latter category, resting alongside other lethargic “walking simulators” like Dear Esther and The Graveyard as a game that promotes itself as having a clever, introspective plot, but ultimately provides nothing more than shallow navel-gazing.

The Old City begins well by establishing a strong sense of intrigue with the promise that players “are about to inhabit a broken mind,” and that nothing they see or hear can be trusted. From the outset, main character Jonah appears to be mentally disturbed. He refers to the sewage tunnels he inhabits as the “innards” of a massive creature he calls the Leviathan, treating the structure as though it were alive. Several notes are plastered across his walls with references to Minotaurs, and he mentions that he only saw what the world truly was after he drank “unclean water.” These are not the thought processes of a sane person.

Once I was able to control Jonah, I searched his section of the sewers for a few minutes until I came across a child’s bedroom. Opening a door revealed a huge black staircase with a faint light at the top. The destination was a massive dining hall with statues (or mummified humans) seated at the table. After looking around for a few minutes, Jonah asked to be freed because he couldn’t “swim this deep” and seemed to wake from a dream. This sequence actually achieved the rare feat of making a sewer level compelling, and I was hopeful that the rest of the game would build on this atmosphere. After this first chapter, however, my interest dropped.

In each new area there’s really nothing to do except look for notes detailing the history of the island and the conflict between three factions of survivors: The Guild of the Greater Eye (a deistic religion,) the Order of the Cosmos (promoting logic and secular atheism,) and the Unknowing, a neutral group distrustful of the other two.

These accounts piqued my curiosity, but did nothing to satiate it. I’ve always felt that when a game is set in a crumbling society, it’s better to involve the player in that world falling apart rather than in the aftermath—it gives the player a greater stake in events to see them unfolding, rather than having them read reams of text. In the absence of anyone for Jonah to interact with, the game provides a backdrop of ideologically-motivated violence decorated with bloody corpses and decaying rubble in the hopes that players will be satisfied with this minimal effort.

With the exception of a few brief detours that lead to dead ends or collectibles, the game follows a restrictive linear path. Rather than being encouraged to explore, graffiti and hastily scribbled arrows direct players in the direction they should follow to reach the next chapter. The only rewards obtained by deviating from this path are more notes to read.

This linearity was disappointing because there might be potential in a more open setting. During my playthrough I came across various doors that had some obstruction, usually padlocks or debris creating a blockade. If I’d had the opportunity to find ways past these obstacles, to access regions long barred off and holding secrets that were mine alone to know, I would have been thrilled. There were even tools scattered about in several rooms which could have been used to break through the locks, but I couldn’t interact with any of them.

As I went on, the matter of Jonah’s “broken mind” diminished in importance. It became clear that the world he inhabited wasn’t brought on by psychosis; other people had clearly lived and died there. The only evidence that he was suffering from mental issues were sporadic hallucinations, mostly consisting of surreal images and ominous chanting. It’s hardly enough to create an eerie atmosphere. He also frequently fell into pits, awakening with no harm to his body. These could have been more mirages suggesting he was always doomed to plummet, or that it was nothing more than a dream, but I didn’t worry about the answer because barely halfway through the game, I stopped caring.

There’s also a much greater problem that plagues The Old City—it presents itself as having more depth than it actually does. Aside from Jonah who believes himself to be living in the belly of a great sea creature, other mentioned characters carry Biblical names like Solomon and Moses. The three factions differ in which of the great beasts they worship: Ziz, Behemoth or Leviathan. One of the groups has drawn depictions of their symbol across the island, possibly referencing the all-seeing Eye of Providence. These things seem chosen not for any significance, but simply because they sound meaningful.

One of my greatest frustrations with The Old City was its lack of closure. I don’t mind a bit of ambiguity when reaching the end of a story if it helps maintain some sense of fascination, but I needed some idea of what happened in the big picture. Consider Amnesia, Bastion, Braid and Fragile Dreams; all four present ontological mysteries with clues that unfold as the player progresses, eventually delivering a grand revelation that puts everything into perspective. In contrast, The Old City ends with an anti-climactic resolution that left me feeling cheated.

There is some meatier backstory which can be gleaned through seven hidden notes with a combined wordcount around 30,000 (really!), but seeking these letters out isn’t really worth the effort. So much of it is spent on pointless tangents, shallow existentialism, and clichéd cynical drivel about how humanity is blind to the truth which only the author is enlightened enough to see. Trying to get through all of these notes is almost as excruciating as reading John Galt’s seemingly endless filibuster.

The longer I played The Old City, the more I kept hoping that it would end sooner than it did. While each chapter can be completed in about ten minutes or less, the lack of involving content and Jonah’s unbearable droning made it all feel much longer. There was potential for a good story, but the pretentious writing suggests that the creators think they’re more intelligent than their audience, except what they have to say ends up having no intellectual merit. Rating: 4.0 out of 10


Disclaimer: This game was obtained via a review code provided by the developer. Approximately 2 hours of play were devoted to the game, which was completed, with an additional hour spent reading Solomon’s notes. There are no multiplayer modes.

Parents: This game has yet to receive an ESRB rating. Pan European Game Information (PEGI) rates The Old City as appropriate for players 12 and older. There is occasional swearing heard both from Jonah and in several notes. Occasionally players will stumble upon bloody or dismembered corpses.

Deaf and Hard of Hearing: Subtitles are available in English. The game does not rely on audio cues to progress.