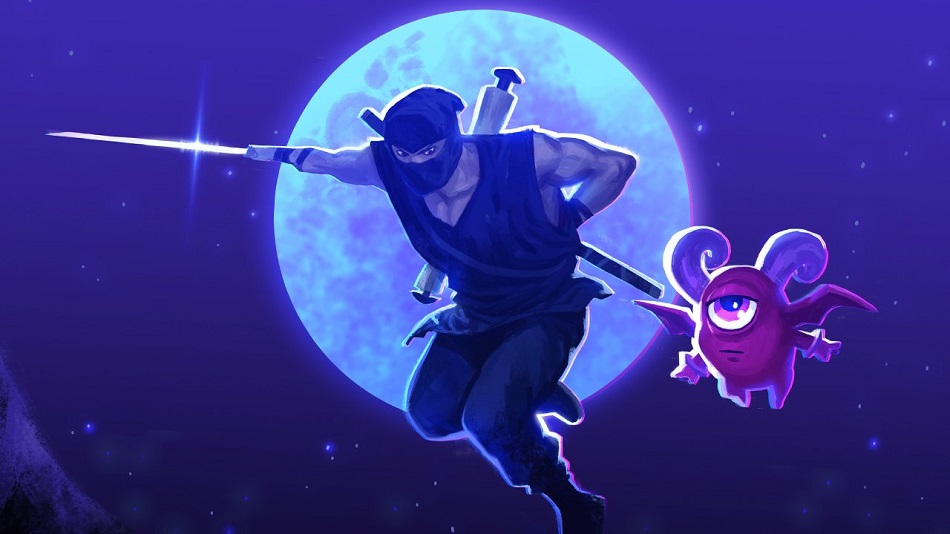 LOW Being “killed” 53 times by the same boss and chase.

WTF What does Quarble spend his Time Shards on?

I played The Messenger for 17 hours, all the way to completion.  During that 17-hour span, I saw the “death” screen 598 times.  That averages to 35 “deaths” per hour.  I put “death” in quotes because the eponymous Messenger is never killed, per se — technically he’s always saved at the last minute by a guardian demon named Quarble, but the player is still restarting from a checkpoint and trying again.

Had I not been reviewing the game, there’s a good chance I would have set it down after one particularly infuriating stretch where I was eaten by the same demon over 50 times while trying to master a grueling sequence of jumps requiring near pixel-perfect timing while the eldritch horror chasing me used cheap catch-up AI to stay on my heels. I said the words “this is not fun, I hate this” out loud over and over again as I dreamed of winging my controller through my monitor.

…I guess I’m saying The Messenger is challenging, often unfairly so.  However, there are stretches of platforming brilliance to be found, as well as some clever, oddly introspective and meta writing, interesting genre shifts, and a cool aesthetic which kept me going despite the difficulty.

The Messenger starts out as a typical ‘run to the right’ NES-era nostalgic platformer with a standard run and jump, and it does this very well by mixing all the expected tough jumps, item-filled lamps, and evilly-placed enemies one associates with the Ninja Gaiden-inspired gameplay The Messenger is paying homage to.  However, it does introduce a clever innovation as the main character can jump a second time immediately after attacking an object or enemy in mid-air, which becomes an essential survival tactic and way to inflict damage on boss characters in later stages. 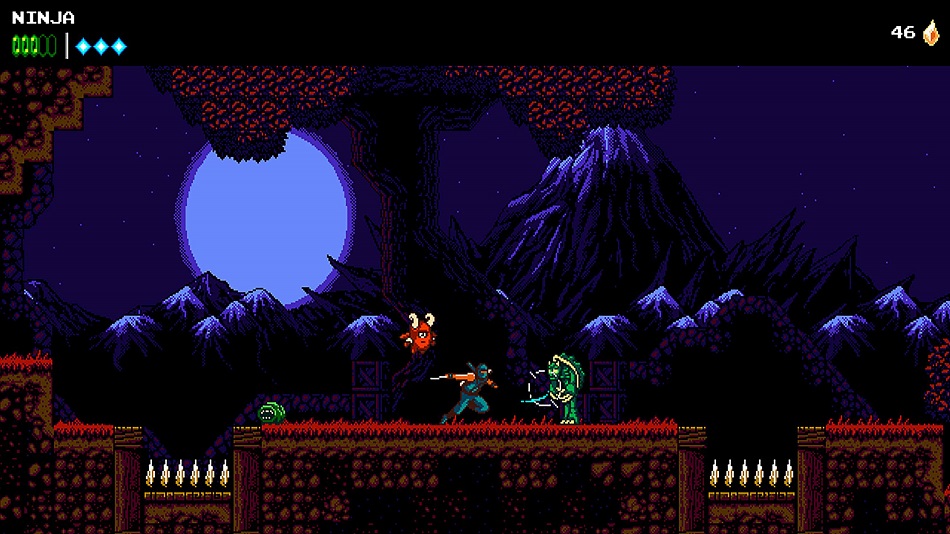 As levels are completed, additional abilities such as a wingsuit allowing the character to float, a grappling hook and climbing claws are unlocked. These upgrades are generally accompanied by witty meta-dialogue asking why this stuff isn’t given out at the start, and this commentary is at odds with the more serious storyline of a nearly-dead world awaiting the second coming of a hero. It’s incongruous and distracting at first, but becomes more enjoyable as the narrative becomes more introspective, discussing the very nature of storytelling and heroism while cracking jokes about cutscenes, hints, and power-ups.

The Messenger’s worst-kept secret is that it shifts genres and art styles at the midway point. Transitioning from an 8-bit platformer to an 8- and 16-bit metroidvania, the game allows players to revisit previous levels and access new areas via accumulated abilities and “time butterflies” which send our hero back and forth in time. It’s a clever hook, and the transitions are seamless, including an incredible switch between alternate versions of the soundtrack.  I spent several minutes travelling through the same portal just to keep experiencing the phenomenon.

Unfortunately, the time butterflies are placed a good distance apart and often in a dangerous area, seemingly to artificially increase the game’s length, rather than simply giving them control over when to enter the two versions of each realm. The backtracking is never particularly egregious, but there are times when it becomes tedious to travel across portions of a map just to acquire the MacGuffin of the moment, and then do the same in reverse with slightly different enemy and obstacle locations to use the item in its proper time period.

Backtracking aside, my main complaint with The Messenger is with the unforgiving difficulty spikes, especially during boss battles and some late-game stretches. 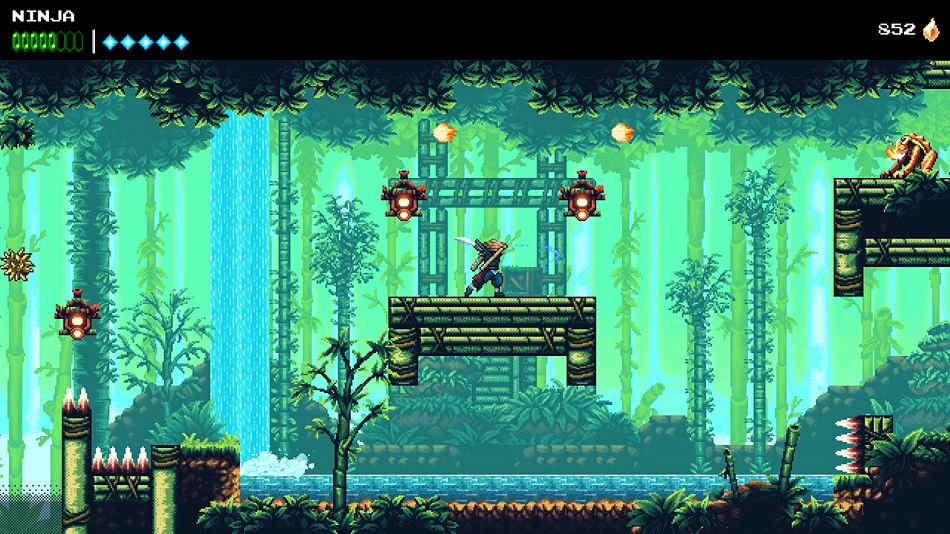 I understand that boss battles are supposed to be a challenge, but some require more rote muscle memory than strategy, which becomes boring as the “deaths” begin piling up. In terms of traversal, I like the way new challenges are provided after being granted additional abilities, but the game pushes players’ abilities to the breaking point rather than allowing the feeling of being powerful, fast, and agile for any amount of time. Saves and checkpoints are unevenly spaced throughout levels, and without a controller, simply crossing the world becomes impossible when the protagonist is required to cloudstep across multiple objects and moving enemies — a single misstep requires a checkpoint restart.

All that said, it feels amazing when a tricky section is completed, especially if that path never has to be taken again.  For those wanting even more challenge, there are 45 “Power Seals” to find, located in the most inaccessible portions of each level.  I managed to snag 18 of them, but decided the reward wasn’t worth the continued irritation, no matter how much my completionist soul burned with the need to collect them all.

The Messenger scratched the itch for a classic “Nintendo-hard” platformer, I loved the homage to all things Ninja Gaiden, and I’m proud of myself for completing it.  Did I enjoy it the entire time?  Definitely not, and I’m glad I won’t need to go through some of that pain again.  Was it worth it?  That’s harder to answer.  There were some strong moments, sweeping vistas, great tunes, and the good primarily outweighed the bad, but I won’t forget how close I came to scrapping the whole thing more than once. Rating: 7 out of 10

Disclosures: This game is developed by Sabotage and published by Devolver Digital.  It is currently available on PC and the Nintendo Switch. This copy of the game was obtained via publisher and reviewed on the PC. Approximately 17 hours of play were devoted to the single-player mode, and the game was completed.  There are no multiplayer modes.

Parents: According to the ESRB, this game is rated T and contains Violence.  The game features animated violence against various monsters and demons, some of whom may be too scary for younger children.  There is an implied dismemberment in a story told by an NPC.

Deaf & Hard of Hearing Gamers: All dialogue in the game is text-based, so no story elements will be missed.  However, one later-game puzzle relies completely on sound cues in order to traverse a maze, with no apparent visual component to help guide the player, basically making this section impassable.  Subtitles can not be resized, nor is there a color option. 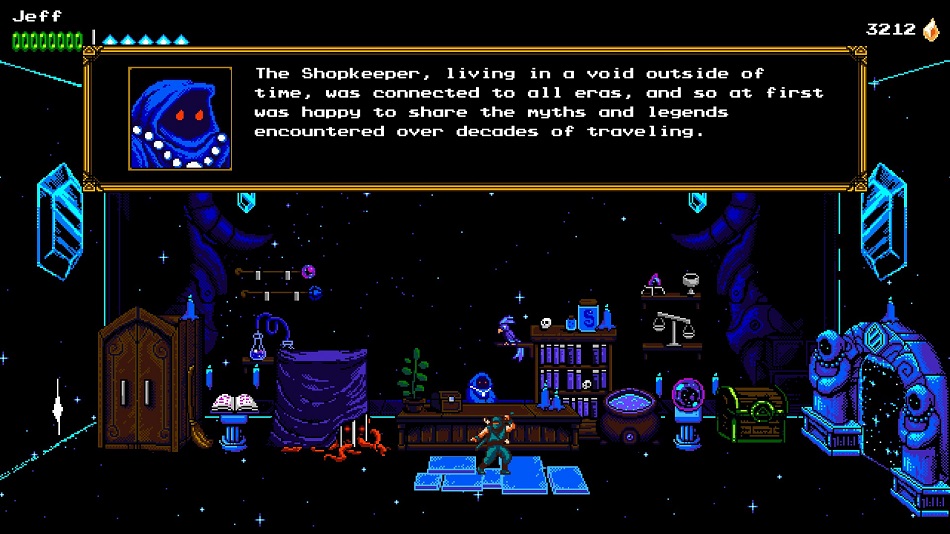 Remappable Controls: No, this game’s controls are not remappable. This game does not offer a controller map diagram, but movement is on the left stick. Jumping is A (flying when earned is achieved by holding A). Attacking is X.  When earned, the grappling hook is B.  Alternate attacking using shuriken is Y (when earned). Left Bumper calls up the map (when earned).  The back button calls up inventory.