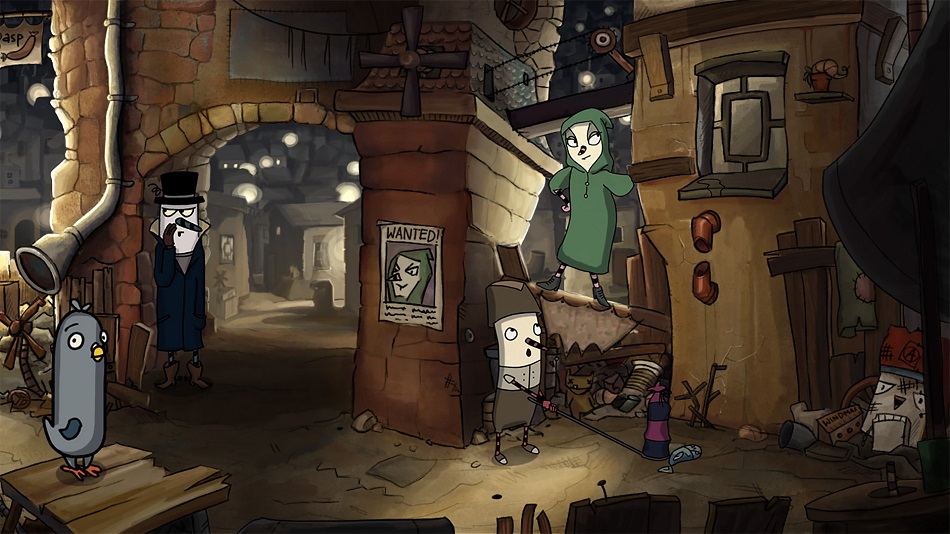 HIGH The cutest voices and soundscape, and the animations are adorable.

WTF Pairing a naked monk and a dirty barmaid to make a baby’s onesie.

Headup Games and Studio Fizbin released The Inner World for PC and Mac a few years ago, and it’s finally made its way to PS4 and Xbox One. The console release results are impressive and well worth the wait for those who have been following the game since its early days.

The player begins by taking control of Robert, an adorable little guy doing his best to serve Conroy, the overlord. A mysterious girl named Laura and her pigeon steal Conroy’s fosfos, which Laura claims was stolen from her father in the first place. The game never does explain what a fosfos is, though — as with much of The Inner World, this particular thing is simply a fact of the that must be accepted. At first, this was a bit frustrating. However, it quickly became part of the immersion.

The Inner World doesn’t care if the player is left unsure about things, and proves it more than once with everything from the strange little fosfos, to the flute-nosed people, to the strawbears, and many other aspects of the world. Somehow, surprisingly, this worked for me and I found myself enjoying a game that felt real because it didn’t seem to care whether I was playing it or not. And honestly I’m still not sure what a fosfos is.

Travelling from screen to screen through a world of hand-drawn animation (think Winnie the Pooh meets Tim Burton), the player uses the bumpers on a controller to select objects and people to interact with, solving puzzles and navigating.

These mechanics are awkward. While movement is handled by the left stick and controls much better than other console point-and-click titles I’ve tried, I had a hard time using the bumpers as the primary way of interacting. Making things worse, instead of selecting the object closest to the character, pressing a bumper usually jumped the cursor to the beginning of the environment I was in, and I often had to click through ten or more hotspots in order to land on the one I wanted. Granted, my controller’s bumpers were pretty stiff, but I found myself pausing to shake out my hands when they’d get cramped from this unorthodox setup.

On the plus side, interactions with characters are hilarious, and I found myself clicking on the same person multiple times just to see what they’d say next. The Inner World did not disappoint, and I was amazed by how much there was to discuss with each character. Often, revisiting a topic after discussing something else brought up new conversation points and helped progress the story and puzzles. The Inner World did a great job at taking a simple dynamic and turning it into something with a lot more depth and complexity than meets the eye. 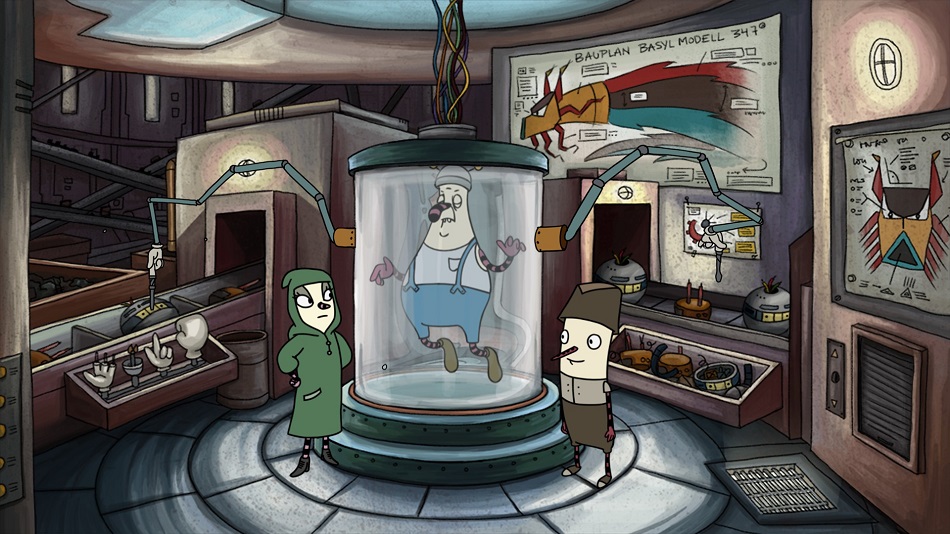 Also good is that the puzzles were pretty challenging. While they fell prey to one of the most common problems in the genre where the next logical step didn’t seem to follow on from the last, the hint feature included is user-friendly, and I actually got an achievement for using it so much. Definitely a bittersweet moment.

On Xbox One, pressing the left trigger opens a task menu, where the player can select from a list of current objectives using the A button. After choosing one, a simple hint pops up giving the gist of what that objective requires. These were usually simple directions that didn’t provide too much information for players still looking to solve the puzzle on their own. However, for those who are as terrible at puzzle games as I am, this can be selected several more times, often giving as many as 10 or 12 more hints, each getting more specific until I knew exactly what to do. This allowed me to enjoy my time because I could decide for myself whether I wanted the puzzle-solving or the story to be my focus, and I could play through deciding at each step how hard I wanted it to be.

While the mechanics weren’t great, the storyline was cute, funny, and a little raunchy — I caught myself more than once thinking about it when I wasn’t playing. That’s a good sign when so many games lately seem to be the “out of sight out of mind” variety.

Most of the story revolved around Robert himself, but Laura’s character and the backstories of those in the environment were also explored. It was interesting and enjoyable to watch cute characters go through conflict, tragedy, romance, and family dilemmas. The dialogue was witty, and felt more natural than a lot of videogame dialogue. The script also went a long way to reveal things about characters without saying them outright, and the story itself turned into a puzzle for me while I tried to piece things together. Thick with sarcasm and thinly-veiled dirty humor, the character interaction was definitely a high point in The Inner World.

Along the same lines, I admit that I was a little shocked —  the animations look so cute, but the content is maybe not for kids. That was part of what drew me in, though. The Inner World offers a lot of humor, but it’s tinged with a dark side.

Unfortunately, I’m sad to report that I was hit with a game-breaking glitch. Towards the middle of chapter 3, playing as Laura, the game would repeatedly freeze on loading as I moved from one screen to the next. Doing some poking around online tells me these sorts of issues are common for The Inner World. I also experienced some lag. While what I saw was enjoyable, I didn’t want to keep resetting and getting stuck, so I decided to stop playing and wait for the next update instead of pushing on.

For players on another console or who are a little luckier with bugs than me, I’d say that The Inner World is generally an enjoyable experience with cute animations and quirky humor — I would definitely recommend it, and based on the number of times my boyfriend turned off his own game to watch me play this one, I would say it’s also good for friends to play together. Rating: 7.5 out of 10

Disclosures: This game is developed by Headup Games and published by FizBiz Studios. It is currently available on PC, Mac, Xbox One, and PlayStation 4. This copy of the game was obtained via publisher and reviewed on the Xbox One. Approximately 12 hours of play were devoted to the single-player mode, and the game was not completed.  There are no multiplayer modes.

Parents: According to the ESRB, this game is rated E10+ and contains mild language, comic mischief, and use of alcohol. To be honest, I think I’d rate it T myself. There was some pretty raunchy humor that included some heavily-implied sex jokes and a lot of tragedy.

Deaf & Hard of Hearing Gamers: I experienced no gameplay issues when playing without sound. Subtitles are on by default and although sound effects are not captioned, I didn’t feel like I missed any important cues. The sound effects in mini-games/puzzles were captioned.

Remappable Controls: No, this game’s controls are not remappable, which could definitely be an issue for gamers without strong grip strength or mobility. I’m fully able-bodied and had some gameplay difficulties with the controls (although I also have small hands).