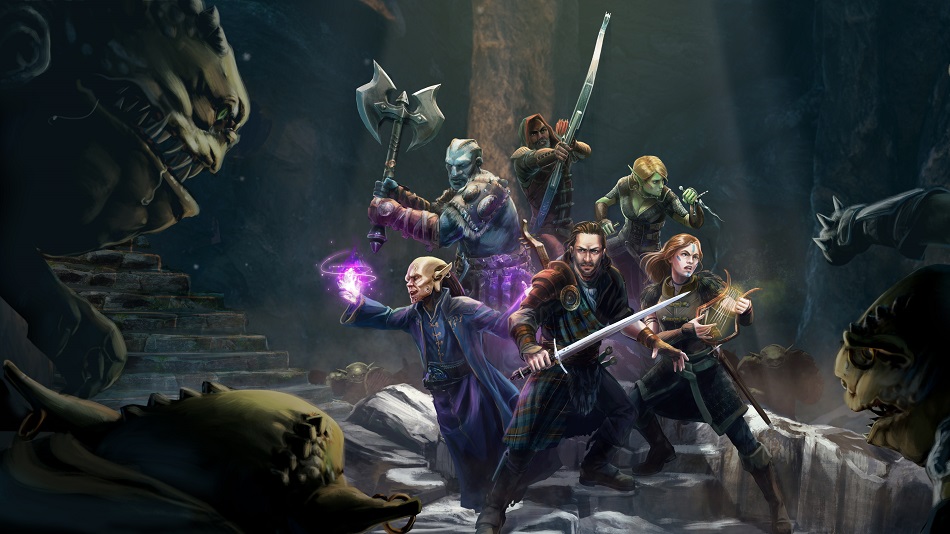 HIGH The atmosphere, lore, and characters.

LOW Too many block pushing puzzles.

WTF Why is my rogue better at combat than my fighters?

I’ll admit that The Bard’s Tale IV: Barrows Deep is my first foray into the Bard’s Tale universe.  In the ’80s I was a console kid, and didn’t own a gaming PC until 1990.  So, while I heard of places like Skara Brae, I knew absolutely nothing of the lore going into this fourth installment in the series.  Fortunately, inXile makes newcomers feel welcome by giving a detailed account of what befell the lands previously, while also introducing concepts like song-based abilities and a unique puzzle-based combat system. There’s also an enormous world to explore, sidequests aplenty, and dozens of hours of play waiting for intrepid adventurers.

However, bloated puzzles, a convoluted save system and questionable quest tracking often make this a tune that’s slightly off-key. The Bard’s Tale IV gives a strong first impression, but for every sweeping vista or gorgeous piece of music, there’s at least one annoyance keeping it from true greatness.

The story of cultists taking over the town of Skara Brae and the town’s protectors fleeing under the city to regroup is immediately gripping.  It’s odd that Bard’s doesn’t allow players the option to immediately create a character, but Melody the default Bard is engaging enough — so much so that I wound up keeping her as my main even when I was able to replace her.

I made my way to the relative safety of the city’s underbelly via the first-person exploration mode which allows complete freedom of movement, save for impassable barriers and an annoying tendency for my character to get caught on background scenery — it’s such an issue that at one point my character became hopelessly stuck in a small out-of-bounds area, requiring a restart, several minutes of repeated travel, and a do-over of combat I’d just completed. 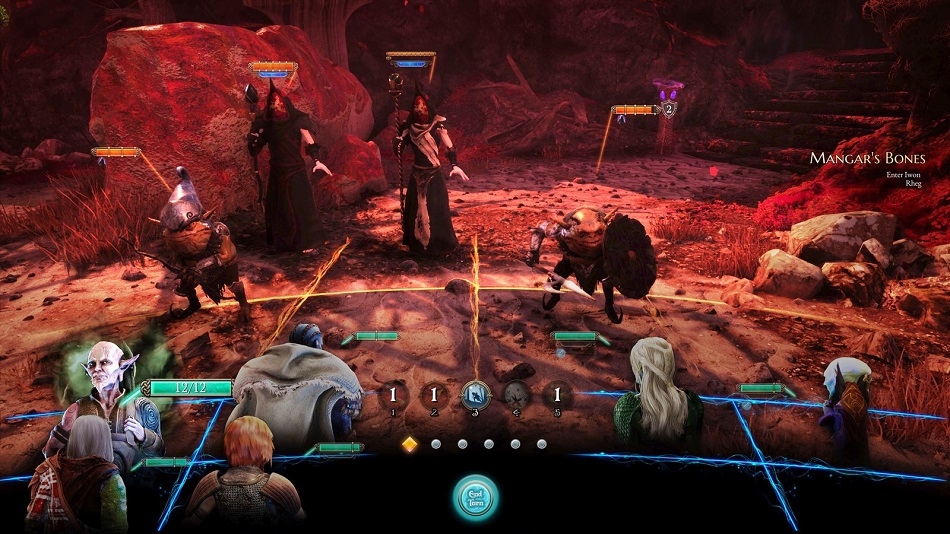 As I learned more about Skara Brae’s history via well-voiced and well-written dialogue that didn’t lean too hard on forced exposition or too much “as you know…” chatter, I was given more freedom to explore the surrounding slums and make occasional forays into the city proper.

Color-coded enemies (green are easy, while red are generally impossible) provide clues as to which ways are safe to travel relative to a player’s level, which is fortunate as quest markers become both increasingly rare and useless as play goes on.

Quest locations are adequately depicted on the map, but waypoints often either don’t appear, or are placed in locations that are difficult to find or navigate to.  Since sidequests can often span a dozen hours before finding all the MacGuffins needed to complete them, the poor tracking makes it easy to forget about many of them — a shame, because they’re often just as worthwhile as the mainline tasks.

Players can eventually have a party of up to six, including either a host of plot-driven comrades, or player-created mercenaries, and dispatching one’s foes in The Bard’s Tale IV combines typical turn-based RPG combat with a movement grid system. 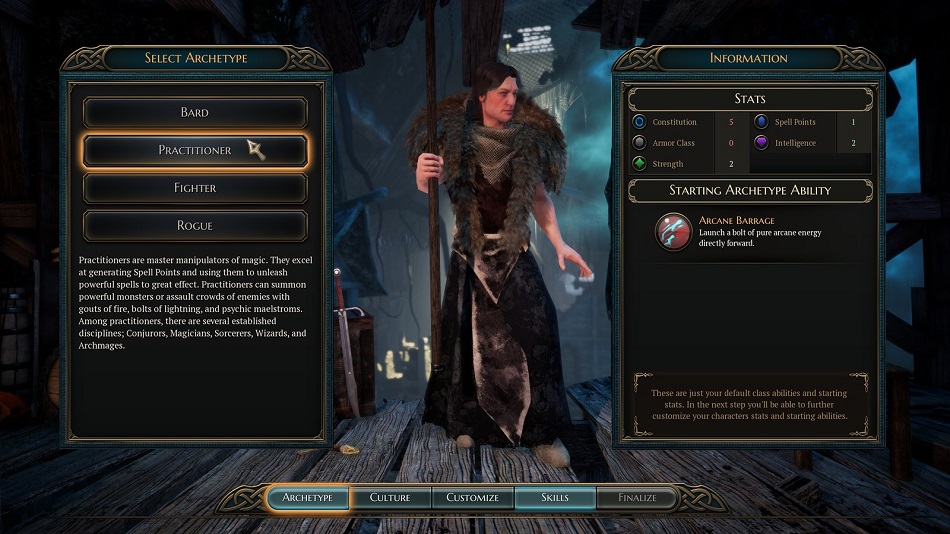 Each battle plays out almost like a puzzle as the heroes have a combined action pool from which they can spend points to move, attack, cast spells, or use items.  By skillfully changing positions and making use of items and spells granting additional action points, it becomes possible to create attack combos capable of defeating all enemies in a single round.  Unfortunately, instead of allowing players to feel powerful for pulling off feats like this, it practically becomes a requirement when fighting undead foes capable of regenerating.

Puzzle-based combat situations like the skeletons are intriguing the first few times, but they quickly wear out their welcome.  Combat also grinds to a halt early on when dealing with armored foes — the explanation for how armor must first be sundered via special attacks before “real” damage can be done is insufficient.  A similar problem occurs when dealing with “mental” damage and attacks — it’s possible to accidentally build characters incapable of dealing damage to certain enemies without realizing it. Once it’s discovered that a tactical error has been made, the lack of a respec option only increases the frustration.

As the campaign went on, I discovered the true evil lurking behind everything nd my travels went far beyond Skara Brae’s confines —  each new land brought incredible sights and varied locations. However, while the narrative continued to drive me forward and I was eager to discover more, the near-endless puzzles drove me close to madness. 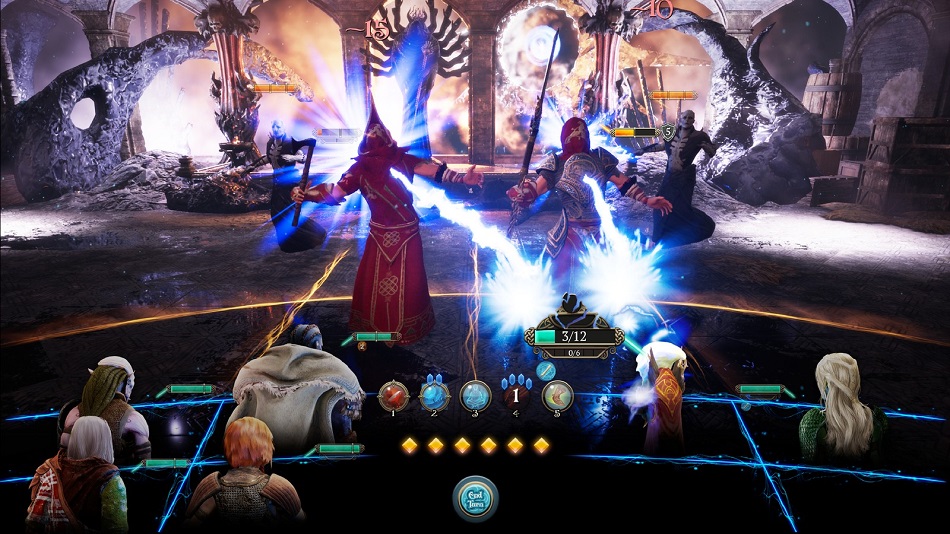 The puzzles weren’t the only things I found problematic — I also had to deal with a bizarre save system that employed oddly-spaced save points. Interestingly, many of the save points could be sacrificed for additional XP — a neat idea, but I’d much rather have the option to simply save wherever and whenever I want.  Don’t tie respawning to arbitrary points on the map because backtracking, redoing puzzles and repeating combat are all things I don’t want to do.

Equal parts fascinating and frustrating, The Bard’s Tale IV is not what I was hoping for.  With patching and better documentation, it could be a stellar roleplaying experience.  As it stands, this Bard needs to practice her tune. Rating: 6.5 out of 10

Disclosures: This game is developed and published by inXile Entertainment.  It is currently available on PC. This copy of the game was obtained via publisher and reviewed on the PC. Approximately 47 hours of play were devoted to the single-player mode, and the game was not completed.  There are no multiplayer modes.

Parents: The game is currently not rated by the ESRB.  The game contains blood, fantasy violence, and some strong language.  The game features fantasy battles against living and undead creatures which all explode magically when defeated.  There are blood pools and some mild gore, and language such as s*it and b*stard appear in the text, and are also spoken aloud.  There is mild-to-moderate sexual innuendo between party members.

Deaf & Hard of Hearing Gamers: The game features full subtitles for all speech, including incidental chatter among NPCs.  Most audio cues have a visual component, although if the player is facing the wrong direction, a puzzle solution may not be detected right away as there a chime when a puzzle has been completed. The subtitles cannot be resized, and there are no color options for the subtitles. 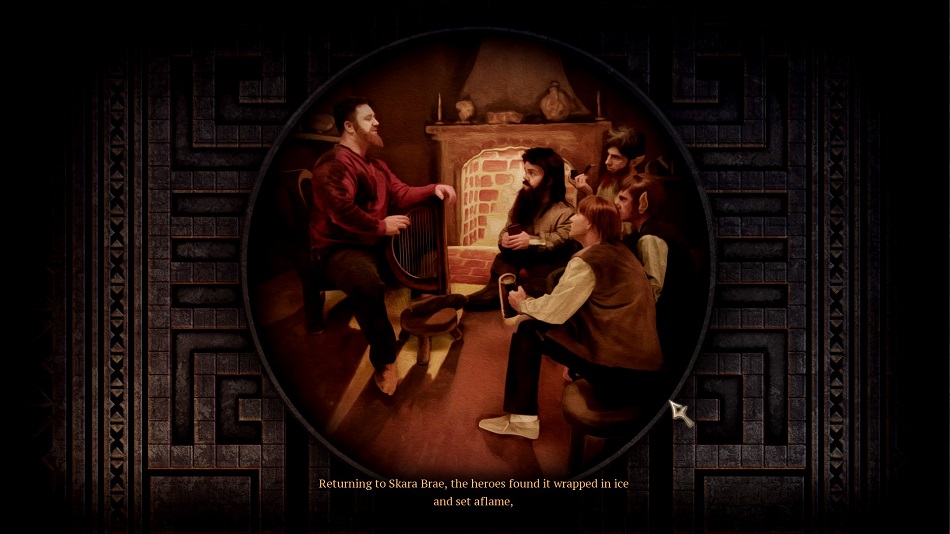 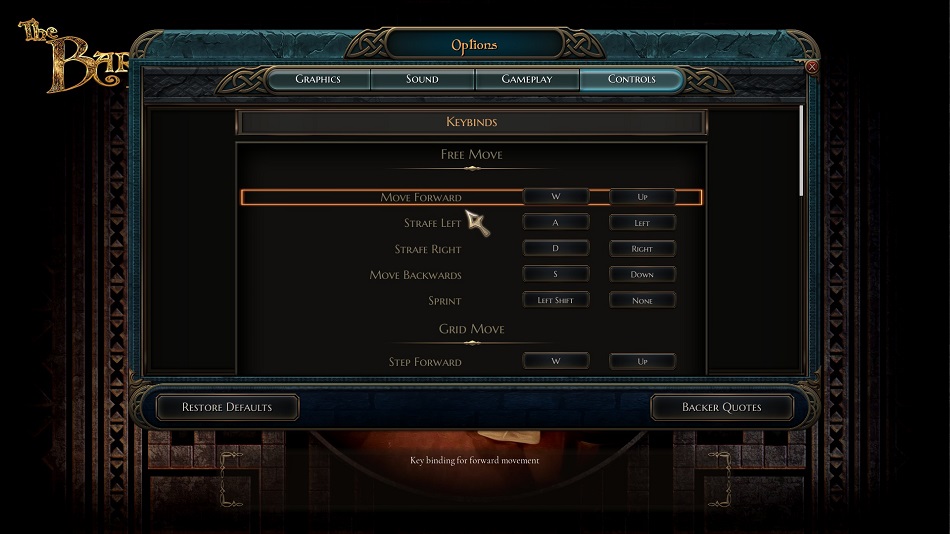 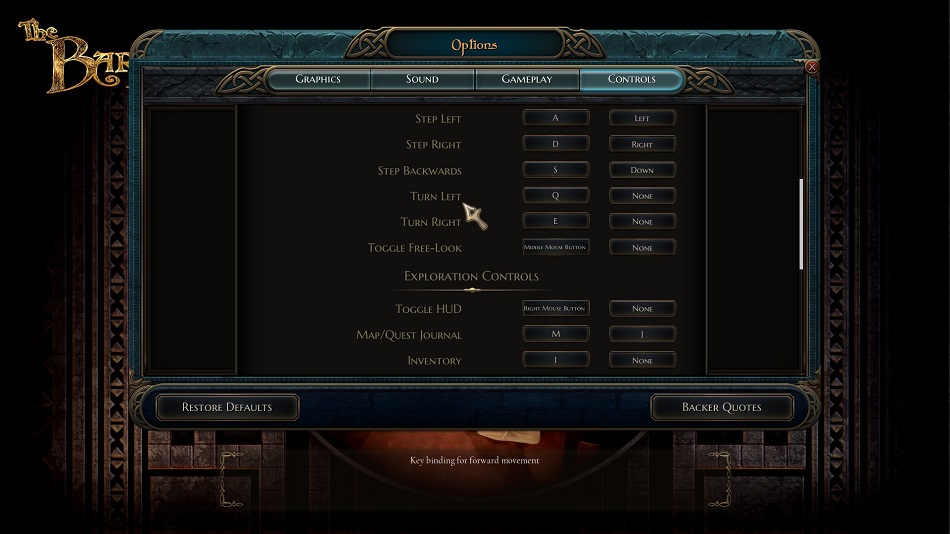 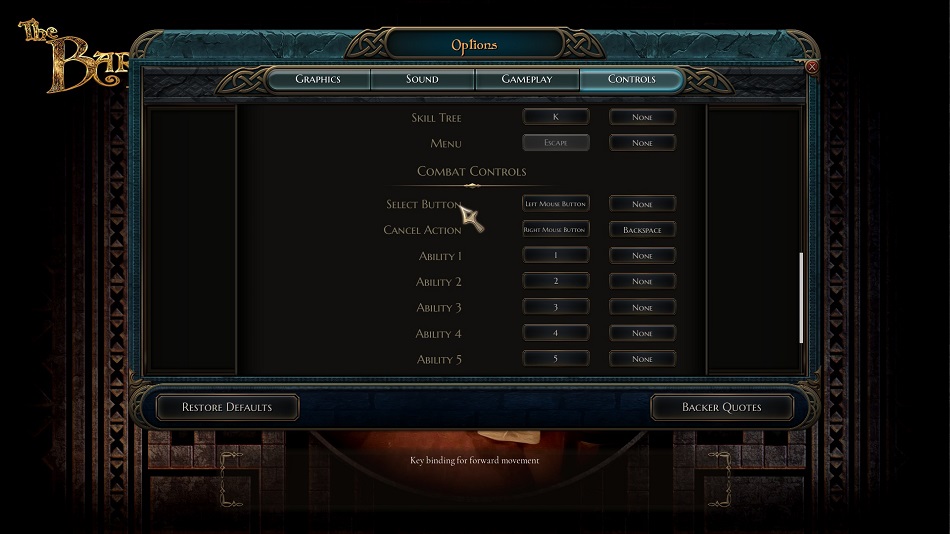 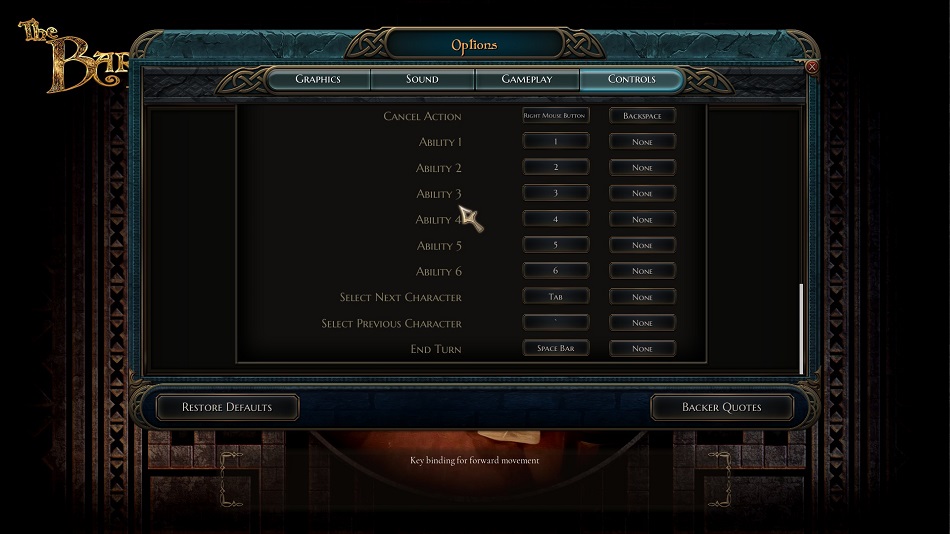 What is the difference between the Director’s cut and The Barrows Deep?