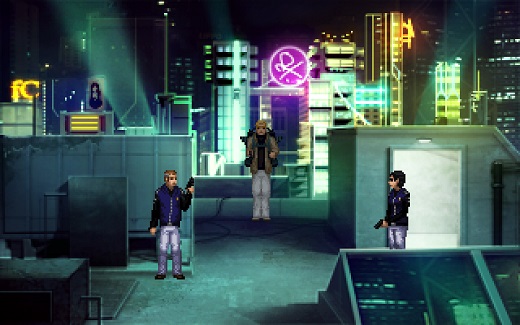 LOW: Some interactive objects are indistinguishable from the background.

I’ve always preferred post-cyberpunk to traditional. The majority of works I’ve come across in the latter genre have been far too cynical. If they aren’t trying to copy Blade Runner or Neuromancer, they always seem to follow the same gritty neo-noir template. Post-cyberpunk, however, is a refreshing alternative to the dark and edgy depiction of a digital future.

Rather than a world ravaged by greed and unrestrained technology, these stories have a more optimistic outlook on humanity’s evolution. Characters have social lives rather than being loners, technology strengthens society instead of leading to oppression, and if there’s a problem with the social order, the protagonists are focused on improving the situation rather than taking an anarchic “burn it to the ground” approach. In my opinion, it’s deeper and more mature than conventional cyberpunk.

As such, Technobabylon is a perfect example of how post-cyberpunk surpasses its progenitor by providing a unique analysis of how humanity will be affected by scientific advancements in coming decades, while also being an intriguing mystery and complex character drama.

The year is 2087. The metropolis of Newton is a beacon of technological prowess and the majority of the populace lives in comfort and peace. Yet this idyllic city is not immune from danger. A sadistic mindjacker has been targeting the scientific elite, ripping the knowledge from their nervous systems in a process that proves fatal.

Dr. Charlie Regis is a law enforcement agent assigned to track down the murderer and bring him to justice, but the case becomes more complicated when the mindjacker blackmails him into performing a terrorist attack. This act almost kills an innocent woman—Latha Sesame, an unemployed shut-in who spends most of her time online. Miraculously, she survives the assassination attempt and goes on the run to learn why she was marked for death. Neither of these individuals know that they’re being used as pawns in a deadly game where the future of Newton itself is at stake.

The world envisioned in Technobabylon is fascinating. Much of Newton is run by a civic coordination AI called “Central” which regulates utilities and assists law enforcement. Medical breakthroughs have virtually eradicated all disease. Society has become more socially progressive, with same-sex marriages being commonplace and transgender individuals able to live as they wish without facing prejudice.

As with every scientific breakthrough, however, the potential for misuse and abuse is rife. Latha is a shut-in who shuns the outside world because she prefers to spend time wired to the Trance, an advanced internet people can mentally connect to. Like a number of other Newton youth, she finds it more interesting than the real world, though her social anxiety plays a role. Technobabylon isn’t subtle about its parallel between Trance addicts and illicit drug users, but online addiction is far from the only problem that plagues this brave new world.

Elsewhere, radical groups are able to genetically engineer living weapons, cultivating a legion of biologically-powered suicide bombers. This atrocious practice deeply affects Regis as he’s had experience with these extremists, sickened by the lives ruined and the amoral scientists who willingly turned children into time bombs. The future depicted in the game is far from perfect, but it isn’t a complete mess. There are still people like Regis who are fighting the good fight against the ills of society to make the world a better place.

Much like Telltale’s recent work, there are narrative segments where players can affect the outcome of a situation. The one that stuck out most was when Regis was negotiating with a potential suicide bomber. He could try to talk the would-be killer into surrendering or ask his partner to take the man out with a sniper shot. The bomber dies no matter what, but how it’s handled affects Regis greatly. Moments like this expose layers of the character that may have otherwise been glossed over.

In terms of play, Technobabylon weaves together elements of classic and modern point-and-click adventure games. There are an abundance of puzzles that require using the proper items from a character’s inventory, or switching between characters to use their respective skills. I also admired that some puzzles have multiple solutions—it’s a style of design I’d like to see more adventure games copy.

For example, in the third chapter Regis needs to interrogate a suspect but is unable to contact him or open his door. To get around the problem, players can either interface with the door’s controls and override it, contact Central and have it remotely opened, or have Regis shoot it with his jolt gun.

Similarly, there are different ways Latha can enter a den where she needs to meet a contact: do a favor for the den’s owner, shut off the power and slip past a nearsighted bouncer in the dark, or get in through a connecting sewage vent. Once inside, she’s then tasked with clearing everyone else from the server, and some of these objectives can again be carried out in more than one way. It offers variety in gameplay as well as highlighting Latha’s street smarts and improvisational skills. I always appreciate it when adventure games have puzzles that can be solved in more than one way, allowing players to think creatively in finding solutions rather than forcing them to follow one set path.

While the character work and puzzle design is solid, Technobabylon has ups and downs as a conspiracy thriller.

One aspect I liked was that the identity of the mindjacker is made clear to the player, but the true mystery is in discovering why this stranger was motivated to commit his crime. There’s also some very effective foreshadowing about the intentions of Latha’s online friends, her past, and her connection to Regis. These things all work well.

On the other hand, Technobabylon falters by making the game’s other antagonists too obvious. As soon as they appeared and their occupations were revealed, I spotted them as villains immediately—it’s pure cliché to have those in high office be connected to a conspiracies that their subordinates are wrapped up in.

I also have issues with the game’s ending. The finale is dependent only on the last key decision, no matter which choices players make throughout the adventure. Very few fates are significantly altered, and while the endings themselves are well-written, they feel hollow.

Despite my issues with the story, Technobabylon remains an exceptional game. Its clever puzzles, complex characters, and unique setting make it a gem that stands out as a welcome change from more gritty, nihilistic cyberpunk stories. I’m not saying those stories don’t have merit, but sometimes it’s refreshing to look into the future and experience a world that hasn’t gone to hell. Rating: 8 out of 10


Disclosures: This game was obtained from the publisher and played on the PC. Approximately 15 hours of play were devoted to the game, and it was completed twice. There is no multiplayer mode.

Parents: This game has not yet been rated by the ESRB or PEGI. There are several murders depicted on screen with varying degrees of gore/injury, including a rather brutal dismemberment. The pixelated character design diminishes the shock value, but more sensitive players could still find the scenes off-putting. Characters occasionally make sexual innuendos and reference illicit drug use, but neither act is depicted. Profanity is occasionally heard though it never overwhelms the dialogue. “Nuke” is used as a euphemism in place of a more common four-letter word (e.g. “get nuked.”)

Deaf & Hard of Hearing: All dialogue is captioned, including developer commentary. Audio cues are not needed to progress through the game.