Not The Smoothest Run, But It Styx The Landing 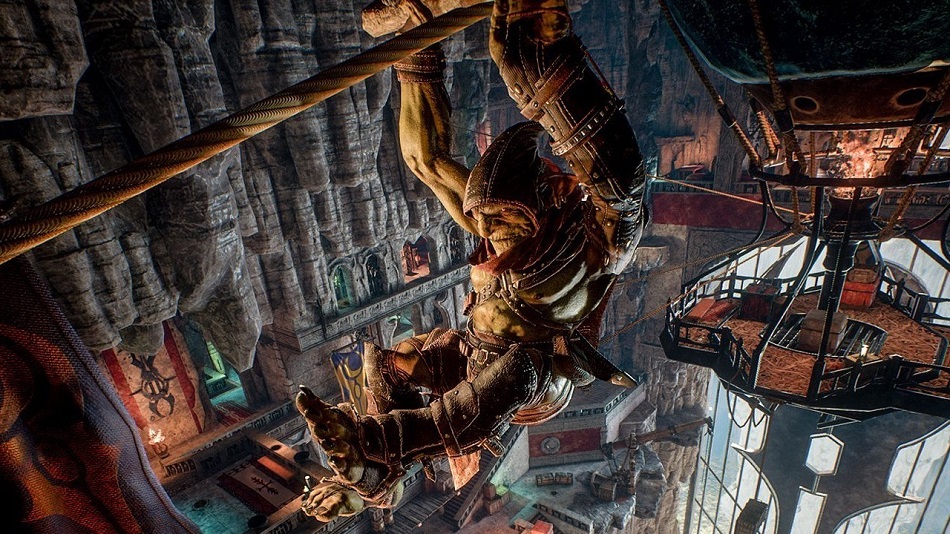 WTF How does Unreal Engine 4 still have texture pop-in?.

2014’s Styx: Master of Shadows was a surprise gem for me, despite how rough it was. Rooted in the ethos of ’90s-era stealth while contemporaries in the genre were moving to a more adaptive approach, it was a third-person game centered around a misanthropic goblin that had to stab, leap and puke his way through adventure. The action had a rigidity that felt constraining, but it wasn’t without its charms due to a smart meshing of storytelling and game mechanics. When Styx: Shards of Darkness arrived, I was genuinely excited to see what changes the development team had made in the years since the first.

As the title suggests, Styx is in the starring role again and he brings the same set of tools with him. He can vomit poison into drinking troughs or food trays, throw daggers to take out unarmored foes, toss sand to create distractions or extinguish lamps, turn invisible for short periods of time, and create a clone of himself, the usage of which has greatly expanded. The emphasis remains on staying in the shadows and circumventing enemies rather than engaging in fights, so most the player’s time is going to be spent with the diminuitive anti-hero sitting in a darkened corner waiting for a guard to pass by, or scaling walls for a vantage point away from prying eyes.

Immediately noticeable was that attention to art and level design has been lavished on the opening missions. The previous game was pretty, but limited to one setting — it offered a lot of dark dungeons, and felt as though there was only one route by which the player could get through. The settings in Shards are more varied, alternating between glorious sunbaked vistas and murky, lamp-lit shanty towns.

The options for traversing these zones have greatly expanded as well. Take the high road above a pack of alert Blood Elves in body armor that makes them immune to attacks, or take the low road through a cave full of blind insects that have acute hearing and the ability to one-shot – both options are viable and interesting in their own ways. The dev team has also added sidequests that encourage exploration and rethinking of strategies to complete. Sadly, a lot of this inventiveness runs out in the latter half. Shards commits the same crimes as its predecessor by revisiting previous areas to pad out the content. 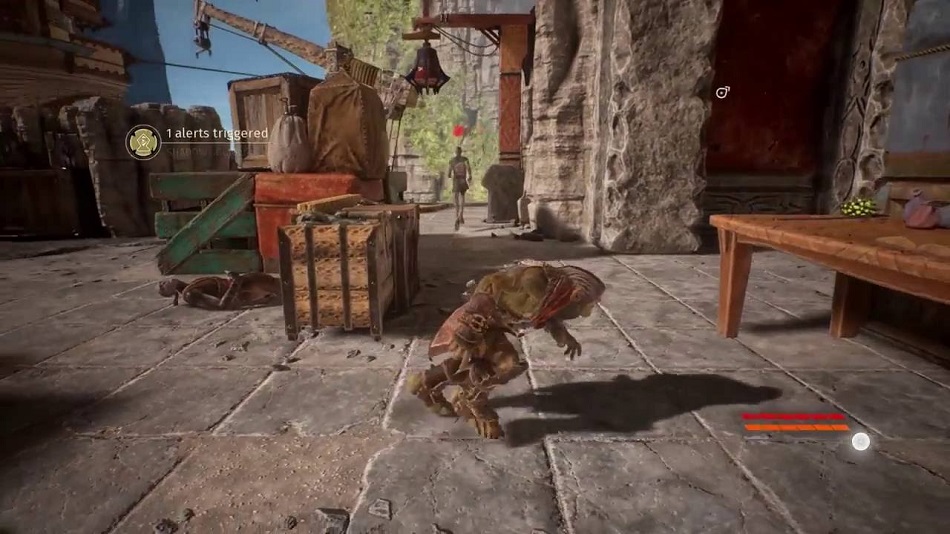 The controls have stayed largely the same, and this can lead to exhilarating maneuvers like skipping through a group of guards by turning invisible, poisoning their food, and then creating a clone as a distraction before slipping through to safety. In moments like this, I could feel the blood pulsing through my temples as I worried that I might be noticed at any second. It’s thrilling stuff. The problem arises when trying to incorporate platforming into feats like this. While on the ground and using hiding spots, I felt like a sneaky, green-skinned assassin. As soon as platforming crops up (and it’s a huge chunk of the game) I immediately felt like a no-thumbed idiot.

The jumping is clumsy, and in places where it shouldn’t be hard to make a leap, I would often fall to my death. Too frequently it wasn’t clear whether I could or could not jump to certain ledges, and it added a layer of frustration that dampened my enthusiasm. Needless to say, the quicksave feature became my best friend.

Narratively, the writing is solid, if perhaps a little disappointing after the original. Styx continues to be a foul-mouthed, misogynistic miscreant, and it works because players aren’t supposed to like him. He’s on a quest that seems to be about feeding his addiction to a drug that fuels his special powers. His foil is Helledryn, a no-nonsense goblin-killer who only appears morally superior because Styx is so despicable. Sadly, the interplay between the two of them is never capitalized on, and the writers seem more focused on fourth-wall breaking jokes instead.

Online co-op lets a second player spawn into the first’s campaign as a clone with many of Styx’s same abilities. Although quicksave can’t be used, the game becomes more forgiving and allows for a broader set of tactics since some scenarios seem designed for coordinated attacks. It is possible to play the whole game this way, although there is certainly one mission that I wouldn’t recommend doing so — it requires both players to not get spotted.

With all the things Styx bumbles, the game really shouldn’t work, but somehow everything still managed to click for me. The stalking, the scheming, and managing the successful execution of strategies are all gratifying. Styx: Shards of Darkness is far from perfect and can’t compete with the triple-A titles already crowding 2017, but it is a great B-tier budget title, and underneath that warty skin, there’s the sort of heart that’s often lacking in its more polished peers. Rating: 7 out of 10

Disclosures: This game is developed by Cyanide Entertainment and published by Focus Home Interactive It is currently available on PC, PS4 and Xbox One. This copy of the game was obtained via Publisher and reviewed on the Xbox One. Approximately 12 hours of play were devoted to the single-player mode, and the game was completed. 2 hours of play were spent in multiplayer modes.

Parents: According to the ESRB, this game is rated Mature and contains Violence, Blood and Gore, Strong Language. The game is based around assassination, Styx swears profusely, is a drug addict and takes pleasure in other people’s suffering. Blood is not explicit but this game is in no way appropriate for kids.

Deaf & Hard of Hearing Gamers: Most of the game is playable without sound, but some plot can be missed as subtitles become disabled when the character moves away from important interactions even though they are still audible. One of Styx’s later abilities relies on audio cues and there is no visual equivalent.

Remappable Controls: Certain functions are remappable. Inverting the X and Y Axis are options, and that’s it.